Connor Fleming December 1, 2017
The 2017 Ballon d’Or will go to Ronaldo or Messi. Will a World Cup-influenced 2018 see their hegemony on the individual prize finally broken?

The winner of the 2017 Ballon d’Or will be announced in a week (December 7) at an insufferable awards gala in Paris, but it’ll be a non-event for those who don’t identify as legionnaire fanboys of either Cristiano Ronaldo or Lionel Messi. One of the two will win it and deserve to win it, and the needle is decidedly edging towards Ronaldo after another monster season that saw Real Madrid outperform Barcelona in both the Champions League and La Liga.

That’s what this award ultimately boils down to — the success of Real Madrid and Ronaldo’s vital contributions to the side will give him the advantage. This is as it should be, but it can also make the procedure pretty tedious.

In the end, like the game itself, the process is much more enjoyable than the end result. Regardless of who wins in 2017, both footballers have provided us with moments of incomparable joy this year. And that’s why the 2018 Ballon d’Or, comparatively, is going to be so much better. Because it’s a World Cup year and that means we’ll have a World Cup, undeniably the best month-long event in any quadrennial period for any human on the planet.

Now, you have to go back 10 years (to Kaka’s victory in 2007) to find the last time the gong wasn’t handed to the Argentine wizard or the Portuguese machine, but with the World Cup playing the role of the most important event of the calendar year, it can and does, historically, have a drastic effect on Ballon d’Or voting.

Ronaldo won the award in 2014 after playing a vital role in Real’s Champions League/Copa del Rey double and Portugal’s World Cup qualification (turning in a famous playoff display against Zlatan Ibrahimovic’s Sweden), but Manuel Neuer finished third (a remarkable place for a goalkeeper and only 0.04% behind Lionel Messi in second) for his heroics with Germany.

With Ronaldo and Messi both still arguably at the height of their powers and with both Portugal and Argentina expected to make noise in Russia, it’s probable that the award will, once again, fall to one of the two, BUT … but there’s also the chance that the World Cup puts an end to their total domination of the world’s top individual prize.

There’ve been examples of such madness before. In 2006 Fabio Cannavaro scooped the award after leading Italy to a remarkable triumph in Germany. Was Cannavaro the best footballer on the planet at the time? It’s a strange one because such was his impeccable timing, positioning and awareness throughout the tournament that he was hardly called upon to really “play” football.

Like the great Paolo Maldini before him, to commit a tackle was to already have made a mistake in the eyes of Cannavaro, and so tackling was hardly a part of his 2006 excellence. It’s not exactly highlight material stuff. He was like a shutdown corner in the NFL, a black hole where football was snuffed out before it even had the faintest opportunity to spark. 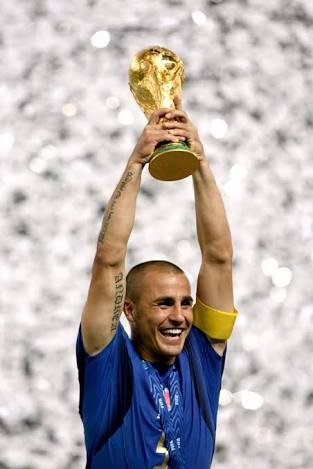 Others have won the award with their World Cup performances being the driving force. Bulgaria’s Hristo Stoichkov won it in 1994 after winning the USA ’94 Golden Shoe. Igor Belanov won in 1986 after scoring four goals for the Soviet Union at the finals, including this belter against Belgium.

Never grow tired of this Igor Belanov goal for USSR vs Belgium at World Cup 86 pic.twitter.com/UaLCrmNDm1