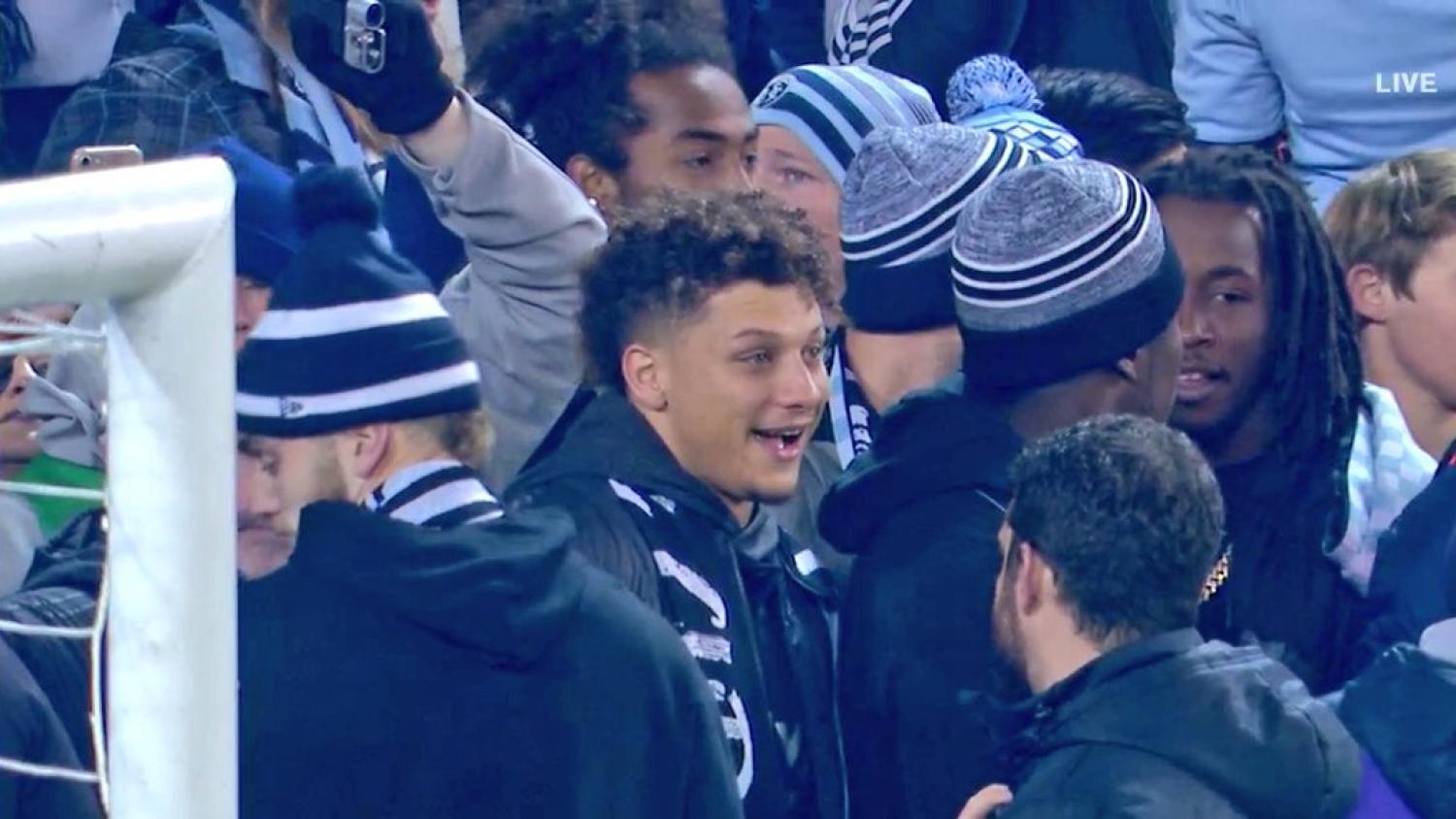 Other Chiefs players attended as well, but Mahomes!
@bhofheimer_espn | Twitter

As if Kansas City hadn’t fallen hard enough for Patrick Mahomes — what with his absurd 37 touchdowns and 330 yards passing per game as a sophomore in the NFL — the Chiefs quarterback gained even more fans on Thursday night by turning out in support of Sporting KC during the MLS playoffs.

Mahomes — along with a few of his Chiefs teammates — scored front-row seats as Sporting KC hosted Portland in a Western Conference final at Children’s Mercy Park. Along with Kareem Hunt, Tyreek Hill, Travis Kelce, Chris Conley, Chad Henne, Gehrig Dieter and Demarcus Robinson, Mahomes led the KC fans in “I believe that we will win!” chants.

You will not find a better sports town. #ForGloryForCity  #ChiefsKingdom https://t.co/qflRUUIBPo

He is the face of this city and will probably be forever..he’s such a fan of all KC sport teams!!!We all love him,not just because he’s the best qb in the NFL,but because he’s OUR qb and represents KC so well!!

This is the quarterback I've waited my entire life for.

My goodness, he is so perfect.

I love that qb1 @PatrickMahomes5 is going nuts for our other boys in blue. #ibelievethatwewillwin @SportingKC

If everyone didn’t already love @PatrickMahomes5, he is doing his part to hype this @SportingKC crowd up. Home team still needs a goal.

SportingKC needs to put Mahomes in.

I swear to god if Patrick Mahomes gets sick because of this soccer game then I will never forgive the Sporting KC.

Careful there with that throwing arm kid.

Seriously...this kid GETS. IT. A passion for having fun, giving back to others and giving back to the community. He absolutely loves our city and I couldn’t be more proud to have him as our QB! @PatrickMahomes5 @Chiefs @SportingKC https://t.co/Du8LJQZA79

Patrick Mahomes is not at home watching Saints / Cowboys.. He is here watching @SportingKC .. #MLSCupPlayoffs

That last tweet is interesting because Mahomes grew up about two hours east of Dallas in the town of Whitehouse, Texas. There he was a star athlete in baseball (he was his team’s best hitter and pitcher), basketball (I saw him go for 20 and 20) and, of course football. Full disclosure, I covered Mahomes for years as a newspaper sportswriter, once watching him throw for more than 600 yards in a high school playoff game. He never played soccer, but he did attend Whitehouse High School soccer matches on occasion. I imagine if he did play soccer, he’d be pretty good at that, too.

Instead, he’ll have to settle for being perhaps the best quarterback in the NFL right now.

Sadly for Mahomes and his Chiefs teammates, Sporting KC lost 3-2 with Portland, allowing the Timbers to advance to the MLS Cup final, where they’ll play at Atlanta United. Maybe Matt Ryan and Co. will show up to root on the Five Stripes?