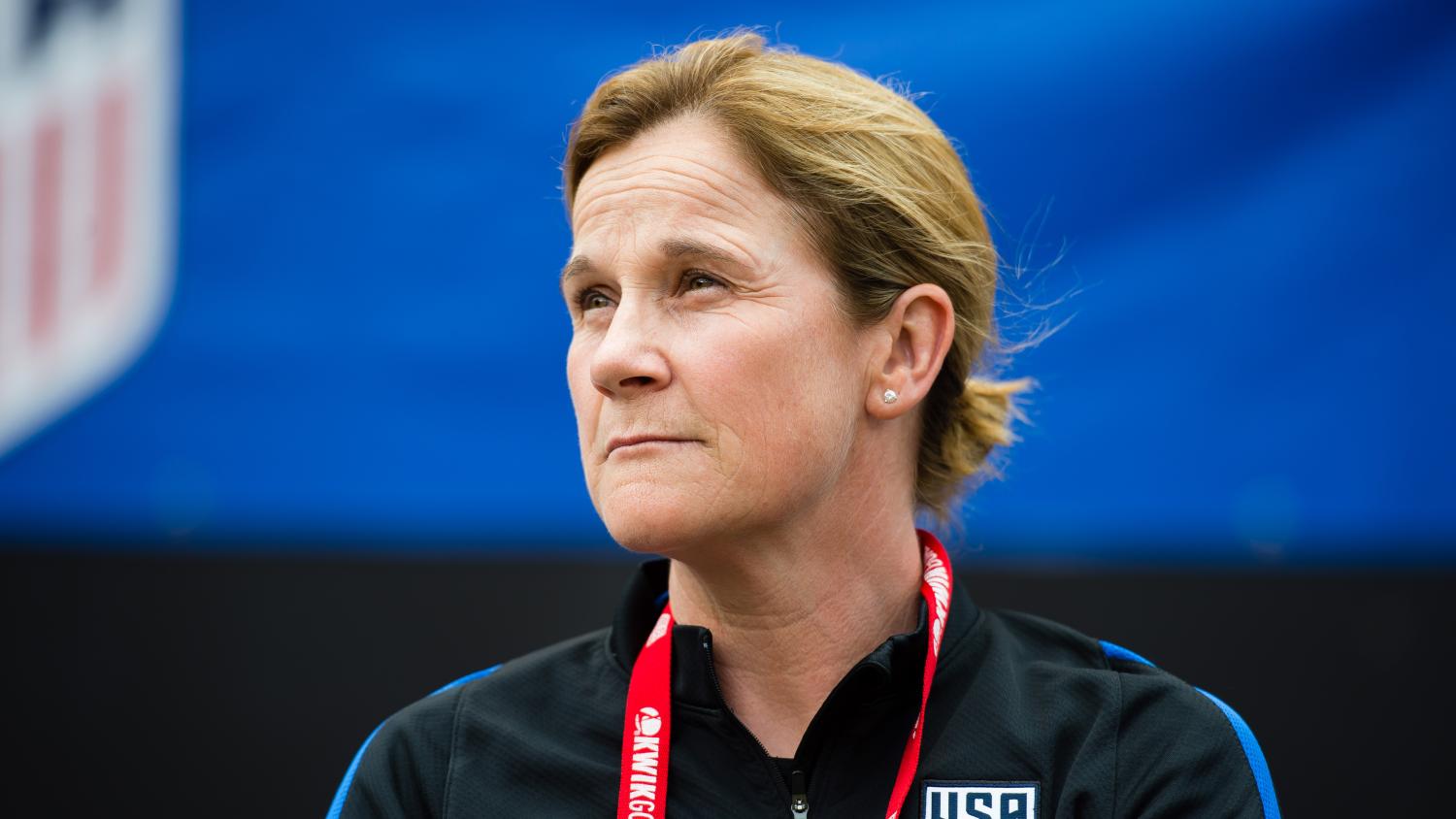 The U.S. needs to bolster its fullbacks, but is Hinkle the answer given her religious views?
Getty Images

At the highest level of sport, how much does chemistry matter?

Do athletes need to have the full trust and respect of teammates to perform at the best of their abilities? Or can professionals put aside personal matters for the sake of the team?

Can you invite a player onto a team who has actively demonized players and coaches on said team?

These are the questions Jill Ellis must ask in the lead-up to the Women’s World Cup this summer.

After the USWNT struggled to a second-place finish in the SheBelieves Cup in early March, it became clear the defending champions have some work to do before June.

I recently wrote about five ways Ellis could improve the team before the Women’s World Cup. I did not consider for one moment Jaelene Hinkle. I doubt Ellis has either. But should she?

The reasons to not include Hinkle are complicated and almost entirely non-football related. There is a section of U.S. fans who would love to see one of the best left backs in the NWSL on the USWNT, especially based on these responses to my aforementioned story.

Would it make sense to bring Hinkle into the team knowing her past?

Who Is Jaelene Hinkle?

Jaelene Hinkle is a 25-year-old left back (she’ll be 26 by the time the Women’s World Cup kicks off) who plays for the North Carolina Courage. A Denver native who played college ball at Texas Tech, she’s got eight caps with the USWNT and is about to start her fifth season in the NWSL.

In 2017, she denied a USWNT call-up for what she stated at the time were “personal reasons.” It was later revealed those personal reasons were not wanting to play in LGBTQ Pride Month jerseys because of her religious views.

Hinkle has been outspoken about her Christian faith, particularly when it comes to marriage rights, despite the fact the USWNT coach and some of her teammates are married to women.

(Let’s be clear here: Hinkle belongs to a group of Christians who want to deny human rights to a large portion of society. Before you sound off in the Facebook comments, keep in mind that LGBTQ rights are not about politics — they are about human rights, just the same as racial, gender or religious discrimination. Imagine if this religious group wanted to deny human rights to people of a certain skin color or religion. This isn’t Colin Kaepernick taking a knee for racial equality, this is a player who chose to deny a national-team call-up because she doesn’t believe in marriage equality and did so while appearing on the national platform of a known racist and bigot, Pat Robertson’s Christian Broadcast Network.)

But let’s ignore the religious beliefs for a moment. Let’s focus on the soccer.

Hinkle’s Courage coach and teammates all stand up and vouch for her. She’s a legitimate talent in a position of need for the USWNT.

Should the USWNT consider making her a part of the team?

Would Jaelene Hinkle Improve The USWNT?

From an on-field perspective, Hinkle would undoubtedly make the USWNT better. If this were a video game in which you could just slot players in regardless of outside factors, Hinkle would be a no-brainer.

Hinkle was voted to the NWSL Team of the Week in the first two weeks of the 2018 season. She finished with four assists, tied for ninth best in the league, the same as international stars like Sam Kerr and Marta. Interestingly, Hinkle wasn’t chosen to the Team of the Week after her interview detailing her reasons for turning down the 2017 USWNT call-up became public, but then again she didn’t supply any assists after July, so her production did dip.

Hinkle has defensive nous, passing, vision and speed. From a purely soccer-related standpoint, she’s what you want in a left back, a position at which the USWNT has little depth. She’s certainly among the top three at her position in this country.

But this isn’t a video game. This is a real-life locker room where players must intimately interact with each other day after day.

Should Jaelene Hinkle Be Given Another Chance?

Regardless of whether or not you agree with Hinkle’s beliefs, does Hinkle deserve a chance to prove herself on the pitch?

In the past, Hinkle has disparaged the LGBTQ community based on her religious beliefs. The U.S. government gives her every right to make such statements (though arguably they are harmful to the LGBTQ community, which has a far higher suicide rate than the rest of the country). For the most part, one cannot be denied employment based on religious views.

U.S. Soccer subsidizes USWNT players’ NWSL salaries, but the national team isn’t your typical day job. Players are chosen not just based on ability, but how they fit into a team, how they’ll perform with their teammates.

National team coaches take into consideration numerous factors. Some, like tactics and technical ability, are football related. Others, like teamwork and chemistry, are less so — Karim Benzema hasn’t been left out of the France setup for years because of his footballing abilities.

Ellis must consider all factors when choosing her team, from how well Hinkle would perform at left back compared to other options to how she would combine with her potential teammates.

Would it be fair to Hinkle to deny her the opportunity to play in the World Cup because of her religious views?

Would Jaelene Hinkle Be Accepted On The USWNT?

The question ultimately becomes: How would Hinkle be accepted by her fellow USWNT teammatess?

It’s impossible to say for sure how U.S. players, many of whom are openly gay, would react to Hinkle’s inclusion after she has been so open about her beliefs. Would they ostracize her? Would they welcome her in for the sake of winning? Would they bury their feelings until they bubble over at the worst possible moment in the Women’s World Cup final because she should have zigged instead of zagged?

Reports have suggested players did not react negatively when Hinkle was brought in for the 2018 camp, but that doesn’t mean players didn’t have their opinions, both for and against her inclusion. It’s possible to put up with a coworker you disagree with because you have to, not because you want to.

Fan reaction, however, was different.

Many USWNT fans called out U.S. Soccer’s hypocrisy for selling Pride Month merchandise but including a player who has stated anti-LGBTQ views.

Is it worth including a player on a World Cup squad who fans are vehemently opposed to? Should coaches consider fans when making squad decisions? Probably not. Jurgen Klinsmann sure didn’t when he dropped Landon Donovan for Julian Green in 2014.

If Ellis thinks Hinkle will make her team better, she has every right to include her.

Is Jaelene Hinkle Worth It?

What would be the cost of bringing in a player who has disparaged the LGBTQ community be to a team that has so many LGBTQ followers?

Jaelene Hinkle is a talented player who, if not better than Crystal Dunn at left back, is a significant upgrade as a backup. Based on her 2018 call-up, her U.S. teammates would probably be professional and play with her for the sake of trying to win.

If Hinkle was the key piece to helping the USWNT win the Women’s World Cup, should she be brought in?

We know a group of fans would be outraged, some of whom would boycott the team. Others would celebrate Hinkle’s inclusion. The players would probably put aside their personal issues in the same way you tolerate your coworker who won’t shut up about his fantasy football team.

Of course, there is the social cost.

U.S. Soccer can’t claim to support equality and then utilize a player who has stated she is against equality for the sake of winning without appearing as a huge hypocrite. It would be the same as McDonald’s saying it wants everyone to be vegan and then selling you a double cheeseburger.

But this isn’t an unusual stance in the world of sports. Players are regularly given second, third, fourth, seventeenth chances when doing wrong. Women’s soccer is no different; USWNT star Alex Morgan has had run-ins with the law in the past.

Pro sports in America are full of active players who are Flat Earthers, Bigfoot believers and climate change deniers, but their views are ignored for the sake of winning. There are plenty of professional athletes who have committed actual crimes in the past but are still allowed to play.

Should Hinkle be any different?

In the end, it probably comes down to personal choice. If you share Hinkle’s religious views or want to win at all costs, you probably want her to be on the team in France.

If you stand for human rights or believe that words have consequences, you probably don't want Hinkle anywhere near a United States national team.