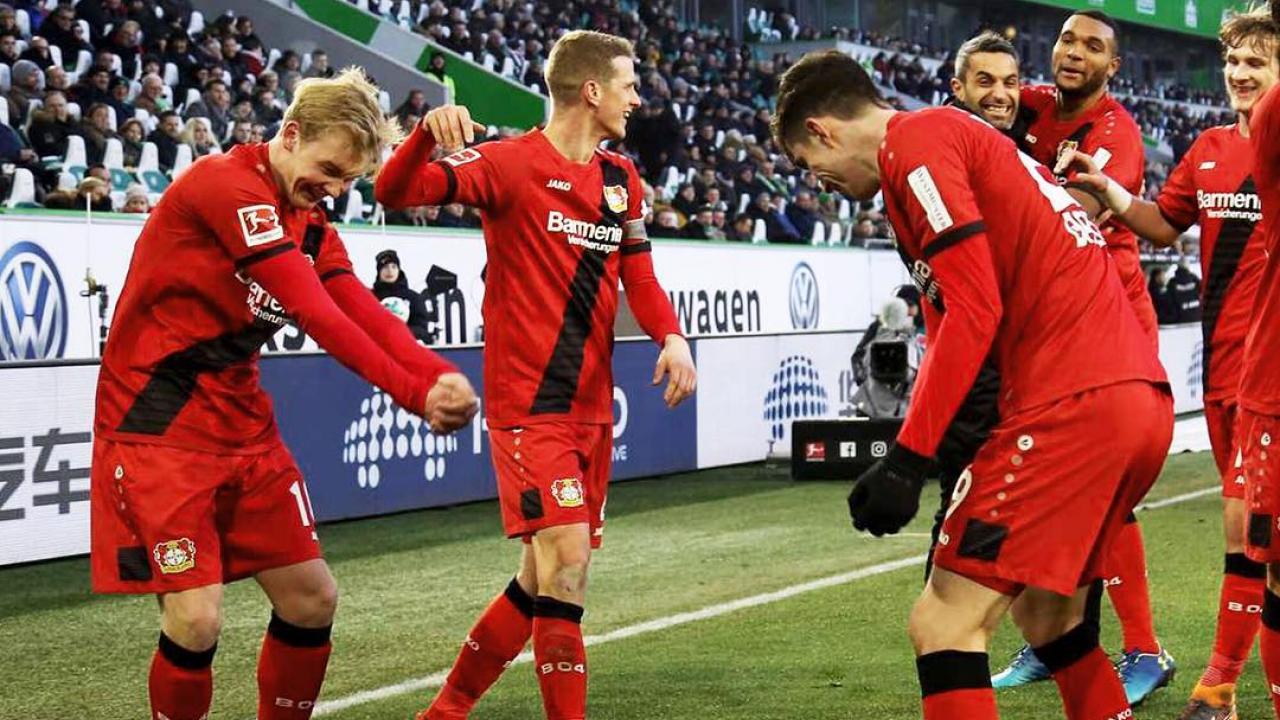 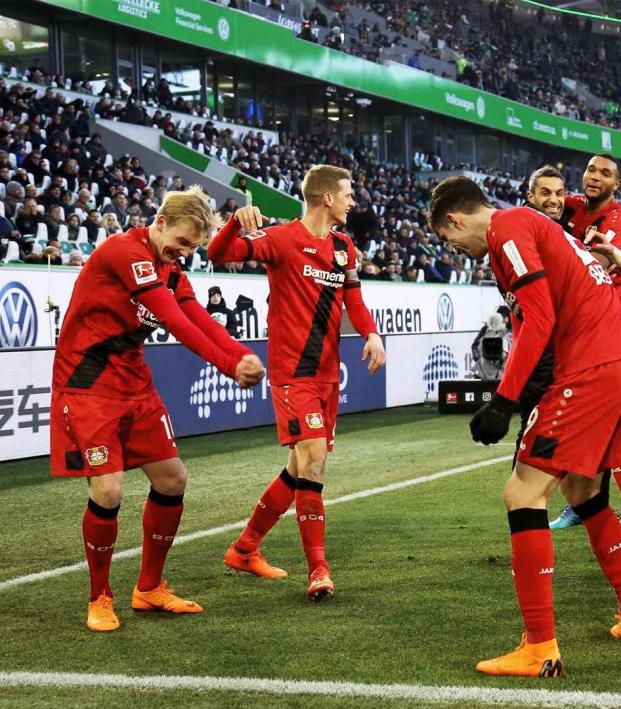 In December of 2000, when up-and-coming Bayer Leverkusen midfielder Kai Havertz was barely walking, a film by the name of “Battle Royale” was released in Japan. In it, middle school students were dropped off at an island where they were forced to kill each other until only one survived. From those grisly beginnings formed the basis for an odd trend in Fortnite soccer celebrations from players around the world, Havertz included.

“Battle Royale” was a cult hit that slowly trickled to the West. Before the days of Netflix, curious movie watchers had to scour questionable websites for a chance to (illegally) download the film, as DVD copies were hard to come by. While violent and sadistic, the movie garnered critical acclaim (it’s got an 87 percent on Rotten Tomatoes) and has a charm to it that has influenced countless works of fiction, now including video games.

A year ago, what began as a mod for the PC game ARMA 2 turned into a massive hit in the form of PlayerUnknown’s Battlegrounds, more commonly known today as PUBG. The game was inspired by “Battle Royale” as players airdrop onto an island and fight for a chicken dinner. While the game only officially released in December (it was available on Steam’s Early Access beta program starting in March of 2017), it has already become a huge part of the eSports world — and the sports world.

A day before Karl-Anthony Towns set a franchise record scoring 56 points for the Minnesota Timberwolves, he and fellow NBA player Ben Simmons were playing PUBG. The two have their own followings on Twitch and are by no means the only professional athletes playing PUBG.

But despite PUBG’s immense popularity, newcomer Fortnite, Epic Games’ entry into the fray, is passing it up. Even in the NBA, players like Lakers teammates Alex Caruso (a Manchester City fan) and Josh Hart have joined in the fun, the latter of which admitted to playing 10 hours straight. The Celtics’ Gordon Hayward is a secret badass at the game. And when No. 16 seed UMBC upset No. 1 Virginia in the NCAA basketball tournament recently, a victorious player compared it to winning his first game of Fortnite.

Fortnite combines the “Battle Royale” fun of trying to be the last person standing among 100 contestants with the building mechanics of Minecraft and — vitally — low cost of entry of being free to play. More than 150 million people have played Fortnite, mostly since the aptly named “battle royale” mode went free to play (PUBG costs $30).

Fortnite now makes up an astonishing 12.8 percent of viewership hours on Twitch, where eSports and game streaming live, compared to an equally strong 8.8 percent for PUBG. Only League of Legends can challenge these two games for views on Twitch, which has viewership ratings that would make Major League Soccer jealous.

One stream hosted by “Ninja” (Tyler Blevins) drew 628,000 concurrent viewers to Twitch, smashing the site’s record when rapper/former Degrassi star Drake joined in to play some Fortnite. (Rapper Travis Scott and Steelers receiver JuJu Smith-Schuster also joined in and Ninja is now making close to half a million dollars in Twitch subs, which makes me wonder why I’m writing this instead of quitting my job to play video games.)

For comparison, ESPN averaged 272,000 viewers for its MLS broadcasts last season, a number slightly more than the 242,000 viewers watching Fortnite on a Tuesday morning.

Games Twitch viewers were watching on an average Tuesday morning. Screenshot via Twitch.tv.

So what does all this have to do with Fortnite soccer celebrations? Players like Havertz, Julian Brandt, Lewis Holtby and Timo Werner have been making references to Fortnite in their goal celebrations this year.

It may have started with Daniel Gordon, a German-born Jamaica international currently with Karlsruher in the German third division, a celebration adorably recreated in Fortnite.

(Yes, you can play soccer in Fortnite, though you’ll probably get shot if you score, so it's only slightly more dangerous than playing against Nigel de Jong.)

It didn’t take long for Leverkusen’s Havertz and Brandt to get in on the act, joining together to loot Wolfsburg after scoring in a 2-0 win.

Havertz and Brandt both made references to Fortnite on social media following the match. In Fortnite, players can use a pickaxe to mine for materials used to build structures to protect themselves from other players. Pickaxes are currently illegal in soccer.

RB Leipzig forward Timo Werner, who could be a breakout star for Germany at the World Cup (although to be fair so could Brandt and maybe even Havertz), soon followed suit.

„We‘re playing Fortnite in our team right now and you’re starting off in this game just with an „axe“. That‘s why I did that move.“

And just this past weekend Hamburg’s Holtby and Stuttgart’s Daniel Ginczek, among others, added to the list of Fortnite Bundesliga goal celebrations.

The L on the forehead is not a reference to a miserable Smash Mouth song but to a celebration that has become wildly popular in Fortnite. For whatever reason, players like to use the “Take the L” emote to celebrate kills.

It should be no surprise the youth players are celebrating with Fortnite memes as well, as Bayern Munich recently highlighted on its Instagram page.

Of course, there are a lot of emotes in Fortnite, and players have been doing celebrations involving these movements for as long as there have been celebrations, as this video highlights with some current and some oldies.

Obviously, only recently have these celebrations been an homage to Fortnite, which was released in 2017 and only exploded in popularity in September. It’s taking over German soccer but it’s spreading all over. The above video featured a Cardiff City celebration while Tammy Abraham, a Chelsea striker on loan at Swansea, lost his shit after playing Fortnite recently.

Hopefully most athletes who partake in Fortnite control their anger a little better than Tammy, but perhaps a sound bug is good training for when the referee makes a poor decision against Abraham without the aid of VAR.

Fortnite is becoming a worldwide phenomenon, so it’s no surprise to see it seeping into the sports world, from the world’s most popular sport of soccer to the world’s most boring sport of baseball. Despite football fans trashing players for doing such celebraitons, they're here to stay. 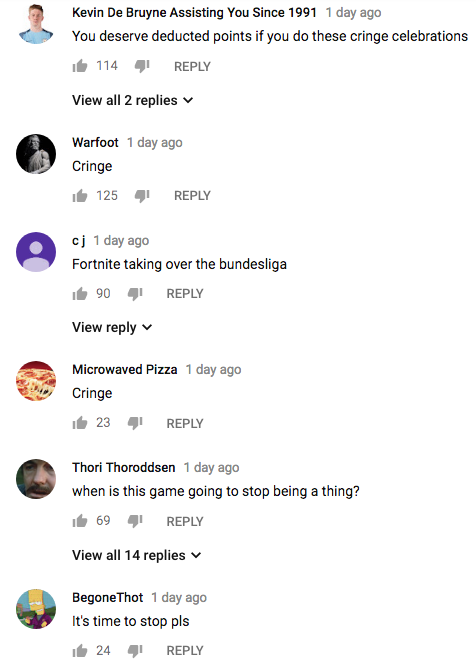 We can't wait to see these Fortnite soccer celebrations get into FIFA 19.