U.S. Soccer Wants YOU To Fund Its Youth National Teams

Travis Yoesting October 6, 2021
I guess all those lawyer fees add up.

U.S. Soccer really knows how to piss off its fanbase. Whether it’s repeatedly denying equal pay requests from USWNT players or failing to qualify for the 2018 World Cup, it speaks to the beauty of the beautiful game that Americans still support their national teams as fervently as they do.

But that’s not going to stop U.S. soccer fans from putting the federation on blast for an odd fundraising push. The USMNT posted an article on Twitter asking for donations for the youth national teams on Wednesday. The responses were both hilarious and predictable.

It starts with dreams and hard work.

Gabriel Slonina is among the next generation of players hoping to represent the USMNT in matches like tomorrow's World Cup Qualifier.

Read his story and consider a donation to support our @USYNT as they return to play this fall.

U.S. Soccer, which reports assets annually in the hundreds of millions, is asking for fans to donate to the youth national teams. If you follow the links, the suggested donation is $50, though the selectable amounts range from $25-200. You’re even given the option to make these payments on a monthly or annual basis, but at least that’s not the default choice like the GOP does for donations.

I don’t think anyone is saying youth national team players aren’t deserving of having the resources needed to be successful, but it wasn’t surprising to see fans’ reactions.

The USSF is a non-profit aimed at making soccer the most popular sport in the country. The USMNT and USWNT are just two of 24 teams under its purview. But it’s by no means lacking in resources, though not all have been spent wisely. 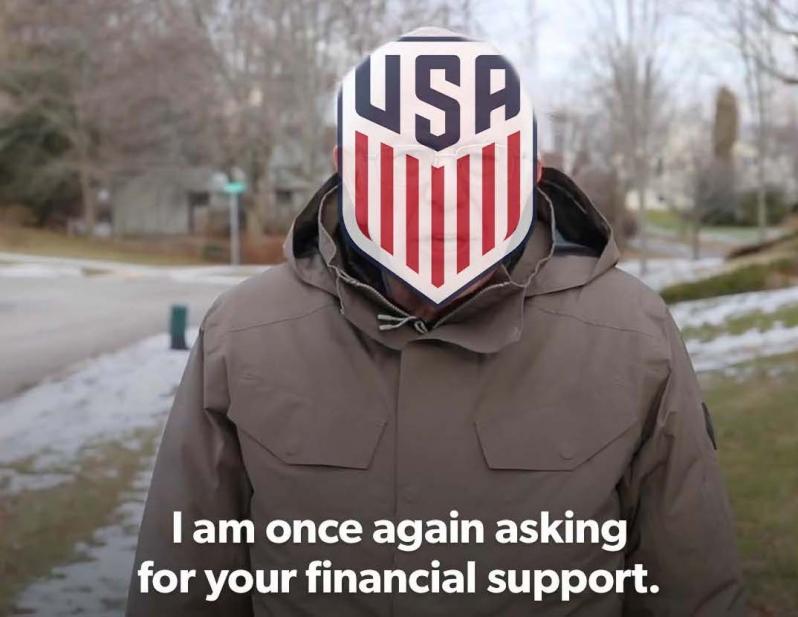 In 2020, U.S. Soccer reported $168.6 million in assets, with $135.4 million in revenue and $165.0 million in expenses, including $19 million for legal fees. I’m no financial expert, but any entity spending that much on legal fees should probably rethink its priorities instead of asking individuals to fund youth soccer.

Twitter users were quick to point out youth soccer shouldn’t be a Kickstarter, noting money spent on legal fees and exorbitant prices charged for match tickets.

Fam, if our kickstarter reaches $500k by Friday, we’ll hold a youth camp!!

Those legal fees won’t pay themselves! The easier solution would to not engage in systematic underpayment of the WNT, but some organizations need to learn the hard way.

In the arms of an angel ………for just $100 you could help feed the #usmnt lawyers who desperately need to be paid for all their billable hours.

This is getting sad. Wealthiest Country in the world won’t put together Youth teams.

No way you just asked us for more money

What do you think: Should U.S. Soccer be begging for donations to fund its youth national teams or should it figure out a way to fund all of its teams?