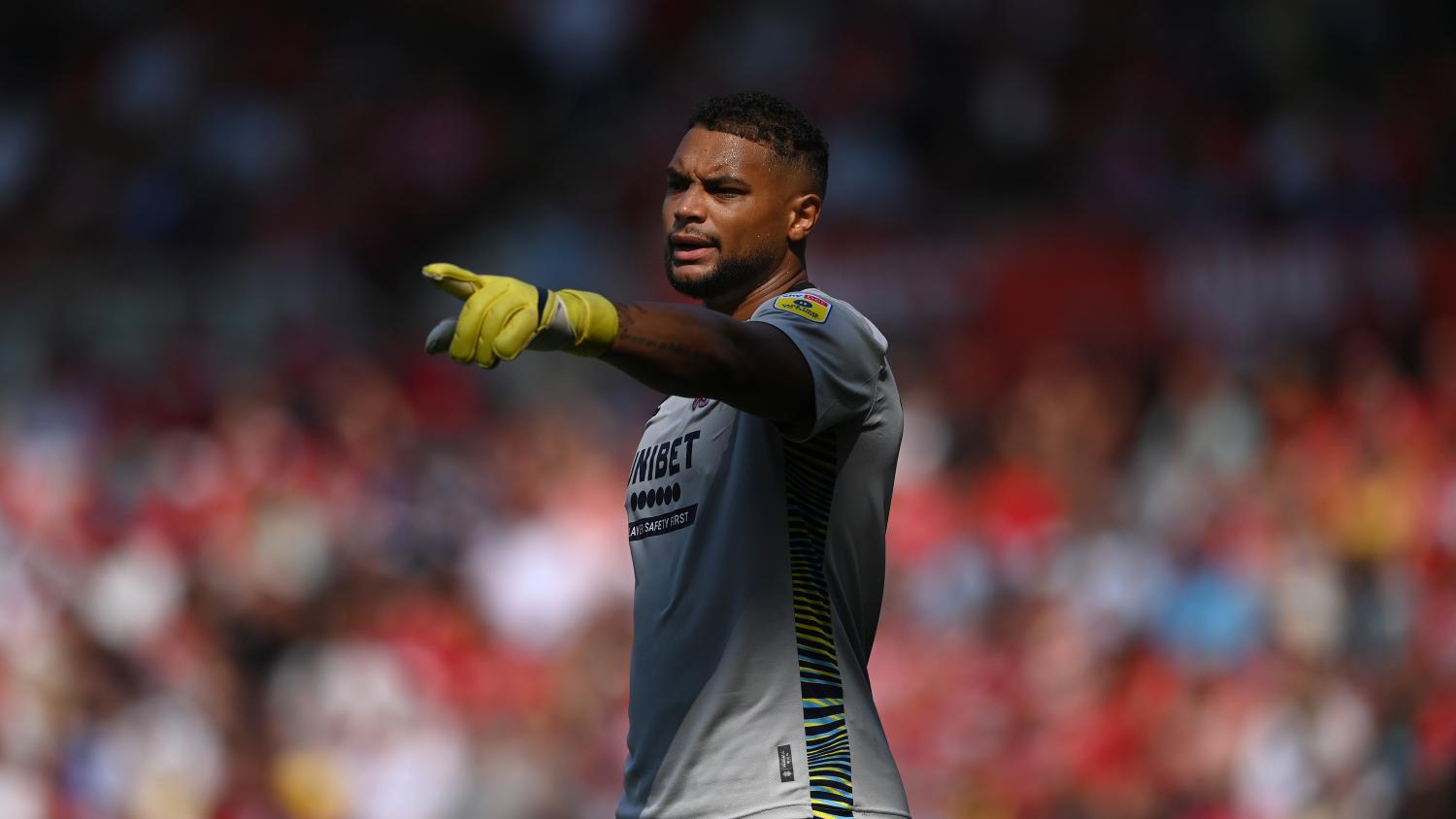 Which American shot-stopper is in prime position to wear the No. 1 jersey in Qatar?
Getty Images

In three weeks, the USMNT begins its World Cup campaign in Qatar. Much is still to be decided for the final roster — especially at the goalkeeper position.

During the September international break (with Zack Steffen omitted as a precautionary measure as he recovered from injury), Matt Turner started against Japan and Saudi Arabia. Turner had a strong showing against Japan, and was arguably the top American performer that day, before having little to do in a dull match versus the Saudis in Spain.

In the last week, some key information in this battle has been made available thanks to our friends over at FBref: advanced goalkeeper stats for EFL Championship keepers (hallelujah!).

As these Championship keepers struggle and others look to make their mark in the MLS playoffs. The question remains: Who will earn the No. 1 jersey, and which contenders will make their way onto the USMNT roster? We have it all in the fourth edition of our USMNT Goalkeeper Power Rankings.

While every other keeper on this list is a regular starter for his club, Turner has made just four competitive club appearances since Memorial Day weekend. The American made his Arsenal debut in a Europa League match against FC Zurich on Sept. 8 and looked rusty. Turner was lucky to not concede early on after a poor giveaway at the back. After that, his only real action was a 44th-minute penalty, which was converted.

In three Europa League starts since, the former Fairfield keeper has yet to concede — albeit against decidedly inferior competition — and has also been proficient with the ball at his feet. Turner's best showing this fall came against Japan during the recent international break, as he single-handedly kept a disappointing USMNT side in the game with a series of important saves.

Groin tightness prevented the American from starting Arsenal's most recent Europa League match against PSV, but we've seen enough from Zack Steffen; Matt Turner is your new American number one.

Zack Steffen's 2022-23 season has been one defined by inconsistencies, and perhaps no match shows this more than his Oct. 1 start against Coventry City. The American started strongly, coming out decisively to make an important 1v1 save early in the first half. Yet two minutes later, Steffen misreads another 1v1 scenario, getting stuck too far out and letting a tame shot go under him.

The Middlesbrough keeper's struggles continued as the match went on. Noted for his sweeping skills, Steffen made a strong clearance outside the penalty area in the first half. But with 15 minutes left, his poor sliding clearance some 25 yards from the end line nearly gifted Coventry an open-goal opportunity.

His unpredictable form continued three weeks later against Huddersfield, as Steffen dawdled on a backpass and had his clearance charged down. Fortunately for him, the result was only a goal kick.

With each iteration of these rankings, it feels as if I'm highlighting a new mistake from Steffen. These errors are easy to pick out, but something I've noticed recently is the plays that Zack Steffen is not making. Boro has allowed the second-highest percentage of set piece goals among Championship teams this season. While not all of these goals are his fault, Steffen has struggled to command his six-yard area when play gets messy — weird bounces, second balls, rebounds.

In black-and-white scenarios— like determining whether to come out for a through ball — the American keeper is a solid decision-maker. But when the play breaks down, he seems timid and is unable to command the situation, choosing to stay on his line and let things transpire in front of him.

The 27-year-old has not been a regular since 2019, and while Steffen has demonstrated that he has the skillset of an international-level keeper, his inability to perform at a steady level takes away his starter status for the USMNT.

Zack Steffen comes off his line and nearly gives up an empty netter. #USMNT pic.twitter.com/oeqw9ZUwG2

As the feature keeper between the sticks for Luton Town, Horvath has not put up eye-catching numbers; he has allowed 3.2 more goals than expected, among the worst in the league. The American has rarely been spectacular for Luton but has barely set a foot wrong, and these stats don't quite correlate with his performances on the field.

In many ways, it has been a curious campaign for the Colorado native — perhaps summarized best by an own goal he conceded where a header deflected off the crossbar, hit his back and crossed the goal line. His first real mistake of the season came against Watford on Oct. 23, when his poor pass resulted in a Hornets goal.

Horvath now firmly holds down the third spot thanks to Sean Johnson's struggles rather than his own successes. Though neither is in contention for the starting spot, the battle for that third and final goalkeeper spot will be a fascinating watch down the stretch.

Let's be real for a minute: Barring a major catastrophe, whoever gets named the third goalkeeper for the U.S. is not going to play in Qatar. Given that logic, why not give that third spot to an up-and-coming prospect who could have an impact four, eight or 12 years down the road?

Gaga Slonina is easily the best U.S. goalkeeping prospect at the moment, and he has also been the best goalkeeper on this list over the last two-plus months (and it's not even close). His reactions are world-class and he possesses the 1v1 skills of a veteran keeper.

The Chicago native just finished training with Chelsea for the first time and joined up with the USMNT MLS training camp. A spot on the World Cup roster would be an immense confidence boost for the 18-year-old who has the highest Transfermarkt value of any American goalkeeper.

As the only American goalkeeper playing in the Champions League, Josh Cohen has been thrust into the spotlight recently after a career of obscurity. Just three years ago, Cohen played for USL Championship side Sacramento Republic, but he has not looked out of place against top European sides.

His seven goals conceded in Maccabi Haifa's UCL group stage matches were a product of the club's overmatched backline and the incredible finishing ability of the Parisians rather than any mistakes from the American. Cohen has played solid, mistake-free football, and while he is a long shot, Cohen has the best chance of advancement of any keeper on this list.

After the latest set of USMNT friendlies, it feels as if Sean Johnson's fate is sealed. As the third keeper on the roster behind Turner and Horvath (Steffen missed out due to injury), Johnson took a seat on the bench.

Johnson started the season strongly with 12 shutouts in 24 matches but has been uncharacteristically poor since we posted our first rankings in mid-August. In this 10-game stretch, the NYCFC keeper has allowed 4.9 more goals than expected. Questionable positioning caused him to concede weak goals against New England and Charlotte, and versus D.C. United, Johnson allowed a goal from a header with an xG value of 0.03 (per infogol).

He rebounded with a phenomenal showing against Montreal in the Eastern Conference semifinals, but more suspect decision-making hindered him during NYCFC's defeat in the next round against Philadelphia. Johnson has had a long, consistent career, but his recent dip in form could be a deciding factor that keeps him off the final USMNT roster.

Sean Johnson has led #NYCFC to a championship before and he's ready to do it again.

Only one more team stands between the Pigeons and a chance to defend their title. pic.twitter.com/HIVEMg4No8

How's this for a hot take: No American keeper has been better in 2022 than Austin FC's Brad Stuver. Stuver ranks third in MLS in percentage of crosses claimed inside the six and second in defensive actions outside the penalty area. He has also prevented 6.2 more goals than expected this season, the best of any American keeper in Major League Soccer.

Still, the former Cleveland State keeper has never been anywhere near the USMNT radar at any age level. This is Stuver's second year as an MLS starter, and while he was solid in 2021, he has taken a huge jump in this World Cup year.

He's not on Gregg Berhalter's radar yet, but given Stuver's performances this year — including two saves in Austin's penalty shootout victory over Real Salt Lake — he should at least be considered as a possible injury replacement if a few keepers are unable to play in Qatar.