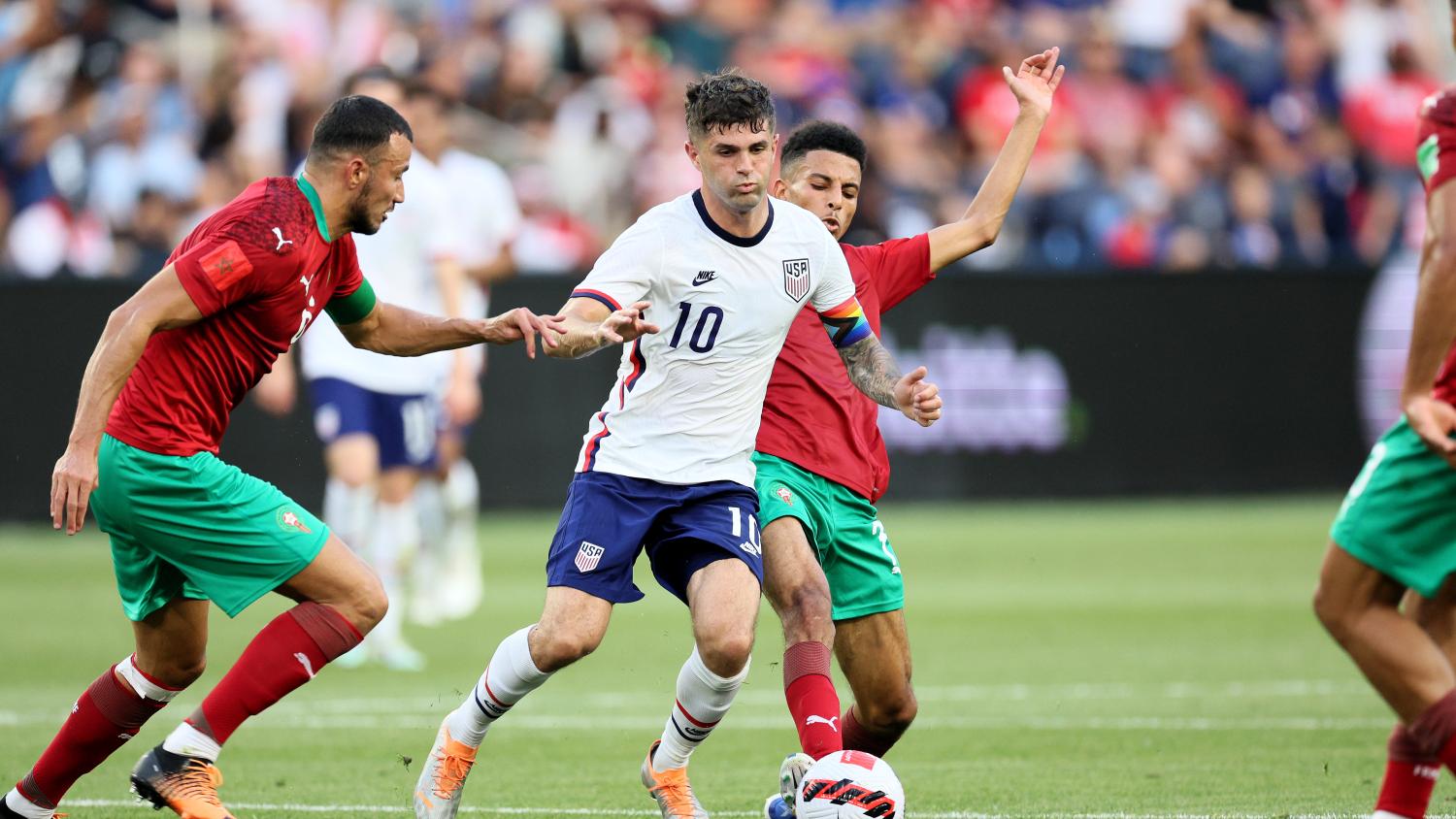 With 7,000 empty seats for the USMNT-Morocco friendly, Pulisic didn’t hold back on the crowd size. The problem isn’t the fans.
Getty Images

After helping the USMNT beat Morocco 3-0 in a friendly on Wednesday night, Pulisic was asked how he felt being back in America. He responded by calling out the small crowd size at TQL Stadium in Cincinnati.

“It was nice (to be back),” Pulisic began, before going on the offensive as he did so well against Morocco. “To be honest, for whatever reason I’m not super happy with the amount of Americans here, however that works out if I’m being completely honest. Thanks to the ones who did come, the support is always great from them, but yeah, it’s nice to be back in America and playing again.”

Christian Pulisic called out the lack of USMNT home fan support after their match against Morocco. pic.twitter.com/kyxBMDw20l

Here’s Pulisic, fresh off creating two goals in a win over a fellow World Cup-bound team, criticizing attendance instead of basking in the victory. It was Pulisic’s first game back in the U.S. since his March 27 hat trick against Panama all but secured World Cup qualification.

He’s got a point, though his comments might not be aimed in the right direction.

USMNT attendance at TQL Stadium on Wednesday was announced as 19,152. That’s not terrible for a soccer game on a Wednesday in Cincinnati, but it’s definitely not good. The sparkling new venue holds 26,000, meaning the stadium had about 7,000 empty seats and was only 74 percent full. With a World Cup on the horizon, why couldn’t U.S. Soccer pack a relatively small stadium?

The USMNT has been used to playing in front of sell-out home crowds over the last year. Throughout World Cup qualifying, the U.S. sold out every home game but one. That one was also the highest-attended home World Cup qualifying match, in which 43,028 filled the 69,000-seat Nissan Stadium in Nashville to watch the Americans draw 1-1 with Canada.

The only small home crowd since the 2021 Gold Cup knockout rounds began was the 11,044 who turned out for the non-FIFA-sanctioned friendly against Bosnia and Herzegovina in which neither side had its A or even B team.

You can’t blame Pulisic and his fellow USMNTers for being a bit disheartened by a small crowd for their first match since qualifying for the World Cup.

There are two obvious reasons why the attendance was low — location and price — and both have simple solutions.

For starters, U.S. Soccer must end its obsession with the Midwest. The USMNT plays way too many games in Ohio and Kansas while ignoring the largest population centers in the country.

Since the start of 2021, the USMNT has played 18 home games. Of those, just two were played on either coast, the World Cup qualifier against Panama in Orlando, Florida, and the Bosnia friendly in Carson, California. Meanwhile, there have been four games in Ohio, three in Kansas City, one in Minnesota, two in Denver, three in Texas, one in Utah and one in Las Vegas.

The next two USMNT home games will be in Kansas City yet again and back in Austin for a third time in a year. I think Austin is a great city with a fantastic new stadium, and being from Texas I’ll always advocate for more matches in the Lone Star State. But maybe the USSF should spread the love around to Houston and San Antonio, two of the biggest cities in the country who rarely get to see the USMNT. (Seriously U.S. Soccer, why do you hate the Alamo City? It’s the seventh most-populated city in the country and has only seen the USMNT play twice, most recently when 64,369 showed up for a Mexico friendly in 2015.)

U.S. Soccer needs to do a better job picking venues. Cincinnati just hosted a World Cup qualifier against Mexico, so of course a friendly against Morocco isn’t going to move the needle in the same way. But go to a place that hasn’t seen the Americans play in a while and the fans will show up.

If, that is, they can afford it, which brings us to the second problem.

Tickets for U.S. men’s and women’s — but mostly men’s — national team games are too expensive, especially for friendlies.

For Wednesday’s game, the cheapest tickets were more than you’d pay to attend a regular-season NFL game. Some fans paid more than $400 for tickets to a damn friendly. For that price, you probably could’ve flown to Morocco and back. Fans in Cincinnati just paid more than $200 to watch the Mexico World Cup qualifier, so they’re not about to drop another $100 for a friendly.

You’ll see the same story for the friendly against Uruguay on Sunday in Kansas City. Currently, the cheapest single ticket I can find is $94 for a backrow corner seat after you add in all the fees Ticketmaster forces us to pay. You could buy about 10 tickets to an MLB game for that price. Seats closer to midfield will run you north of $200. Again, these are ticket prices for an exhibition game. (Ticketmaster is a big problem, as bots often buy up all available tickets for every event and resell them way over market value.)

The USMNT had the same issue during last summer’s Gold Cup, when Children’s Mercy Park sold a meager 12,664 and 7,511 tickets for the first two games of that tournament. It’ll be similar for the upcoming Concacaf Nations League. The cheapest tickets for the Grenada match on June 10 in Austin, the 11th-biggest city in the country with plenty to do on a Friday night, are about $60; not as bad as the friendlies, but not exactly enticing when the opponent is the 170th-ranked team in the world. While those matches are technically run by Concacaf and not U.S. Soccer, the USSF still has a large say in where these home matches are played.

To quote Taylor Twellman: What are we doing? Why are we charging fans so much when we’re trying to grow the sport and make it accessible to all? Does the USSF care more about profits than fans?

It makes some sense for U.S. Soccer to schedule World Cup qualifiers in less diverse locations in hopes of a more pro-USMNT crowd. I understand why the U.S. will never play a meaningful home match against Mexico in Los Angeles or Houston. I get it.

But for friendlies? Why not maximize crowds and ticket sales by playing in big venues with cheap seats? Why not grow the game as the organization is meant to do? As a non-profit, the U.S. Soccer Federation doesn’t have to maximize profits.

U.S. Soccer needs to stop playing games in the same locations over and over. The USSF needs to lower ticket prices, especially for friendlies, aiming to maximize attendance and growth of the game over price gouging. Sure, fans could just refuse to pay the exorbitant prices, but why is a non-profit even allowing prices to get that high?

Pulisic has a point in calling out the partially empty stadium on Wednesday night, but he shouldn’t be pointing the finger at fans. He should be blaming the U.S. Soccer Federation.