Can Any MLS Clubs Upset Their Liga MX Opponents In The CCL Quarterfinals?

Connor Fleming April 26, 2021
This might be a step too far for Toronto and Portland, but Columbus should be able to test Monterrey.

With five MLS clubs and three Liga MX sides making up the quarterfinals of the 2021 CONCACAF Champions League, the stage is perfectly set to deliver the matchups we all want to see.

While one MLS side is guaranteed passage to the semifinals (Atlanta and Philadelphia do battle in the quarters), we’re eagerly anticipating 2018 CCL finalist Toronto against 2014 CCL winner Cruz Azul, reigning MLS Cup titleholder Columbus taking on 2019 CCL victor Monterrey, and 2020 MLS is Back Tournament champ (the highest accolade around) Portland clashing with 2016 CCL top dog América.

We’re guaranteed a new champion this year as Tigres failed to qualify for the event, but can an MLS representative finally lift the trophy for the first time since the LA Galaxy in 2000?

We’ll have a much better idea following the quarterfinals, which take place on Apr. 27-28 (first legs) and May 4-5 (second legs). The CCL then goes on hiatus until Aug. 10-12 with the start of the semifinals. 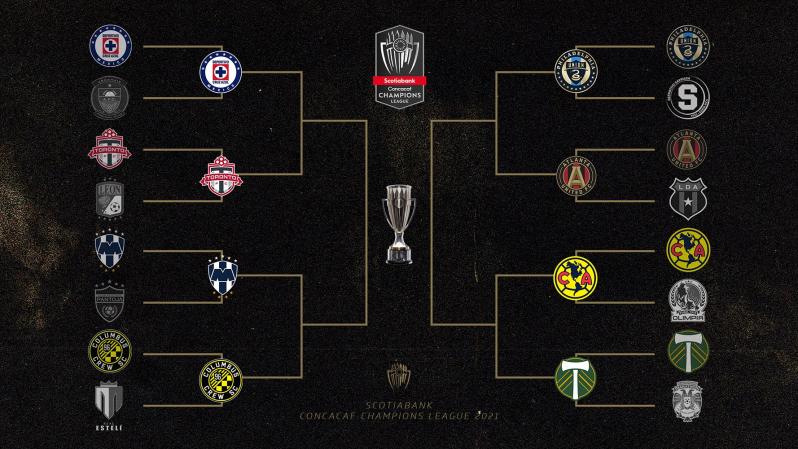 Atlanta: A professional 2-0 aggregate win over Costa Rican champion Alajuelense got the Five Stripes here, and the club’s MLS season began with a 0-0 draw with rival Orlando City before recording a 3-1 win over the Chicago Fire on Saturday.

That match was highlighted by Ezequiel Barco’s piece of violence.

There’s a lot of reason for optimism in Atlanta: Barco is scoring goals like this, the fans have quickly taken to manager Gabriel Heinze, Josef Martínez is working his way back to fitness, Marcelino Moreno looks the real deal and new Designated Player Alan Franco could get his debut.

Atlanta United is 5-0-0 at home in Champions League history, but the club has never advanced beyond the CCL quarters after falling in the final eight to Monterrey in 2019 and América in 2020.

Philadelphia: Alajuelense has overtaken Saprissa in Costa Rica’s top division, but it was still eyebrow-raising to see Philadelphia’s 5-0 aggregate beatdown of the Morados. The Union began MLS play with a 0-0 draw against the Columbus Crew, and then they lost at home to Inter Miami on Saturday.

The Union made a number of changes for that match while looking ahead to Tuesday, and the likes of Anthony Fontana and Stuart Findlay will probably be introduced to the starting lineup. It’ll also be interesting to see how 20-year-old midfielder Leon Flach (formerly of St. Pauli) handles the environment at Mercedes-Benz Stadium.

Prediction: The Union are still retooling after the departures of Brendan Aaronson and Mark McKenzie, whereas Atlanta is quickly growing in stature and will be backed by strong home support.

Toronto: The Reds produced the shock of the last-16 by dumping out León, and they fully deserved it on the evidence given at Osceola Heritage Park during the second leg.

Things haven’t gone as well in MLS play with the club losing to Montreal before drawing with Vancouver last Saturday, and Toronto’s preparations for the Liga MX leader have been further disrupted by an injury to reigning MVP Alejandro Pozuelo, Richie Laryea’s suspension and an alligator.

Due to Covid-19 travel restrictions, this “home” match for Toronto will be played behind closed doors at Tampa Bay’s Raymond James Stadium.

Cruz Azul: Unbeaten in 16 Liga MX games, La Máquina will enter the Clausura playoffs as the No. 1 seed. Uruguayan international Jonathan Rodríguez is having another brilliant season, Mexico internationals Luis Romo, Roberto Alvarado and Orbelín Pineda are all monsters and right back Juan Escobar is a threat going forward.

Prediction: We can’t talk about Cruz Azul without mentioning the possibility of a “Cruzazulear”, but while the 0-0 first leg against Haiti’s Arcahaie spoke to this historic ability to collapse, the 8-0 return leg at the Azteca is a more accurate representation of where this team is at.

Columbus: The reigning MLS Cup champion took care of business in the last-16 with a hugely impressive 4-0 road win over Nicagragua’s Real Estelí followed by a 1-0 victory at home. The club began the new season with a 0-0 draw against Philadelphia, but they did as much without key midfielder Darlington Nagbe and free agent addition Kevin Molino.

Molino is still out, but the rest of the Columbus is returning to full health ahead of this one (aided by a weekend off). This is Major League Soccer’s deepest squad, and they’ve made no secret of their ambitions in the CCL.

The Argentinian duo of Rogelio Funes Mori and Maximiliano Meza should strike fear into Columbus defenders, while 24-year-old Mexican Carlos Rodríguez is one of the finest midfielders around.

Prediction: This one’s going to be very interesting heading back to Estadio BBVA in Guadalupe, but Columbus gets the first leg win against a Monterrey side that's lost three straight in Liga MX.

Portland: After a 2-2 draw in Honduras, the Timbers hammered Marathón 5-0 at Providence Park to advance to the quarters. Colombian Yimmi Chará hit a hat trick, 2017 MLS MVP Diego Valeri added another and Felipe Mora — an old foe of Monterrey with Cruz Azul and Pumas — continued his fine form since joining.

After opening MLS play with a loss to Vancouver, the Timbers rebounded on Saturday with Cristhian Paredes scoring the game-winner against Houston.

América: Las Águilas only got by Olimpia on away goals, but the club sits third in Liga MX and top-scorer Henry Martín is returning to add to an attack that features Federico Viñas and Sebastián Córdova. The defensive spine of the team is solid with keeper Memo Ochoa, center back Sebastián Cáceres and defensive mid Pedro Aquino.

Prediction: This should be close at Providence Park, but América has too much quality, fitness and depth for Portland.