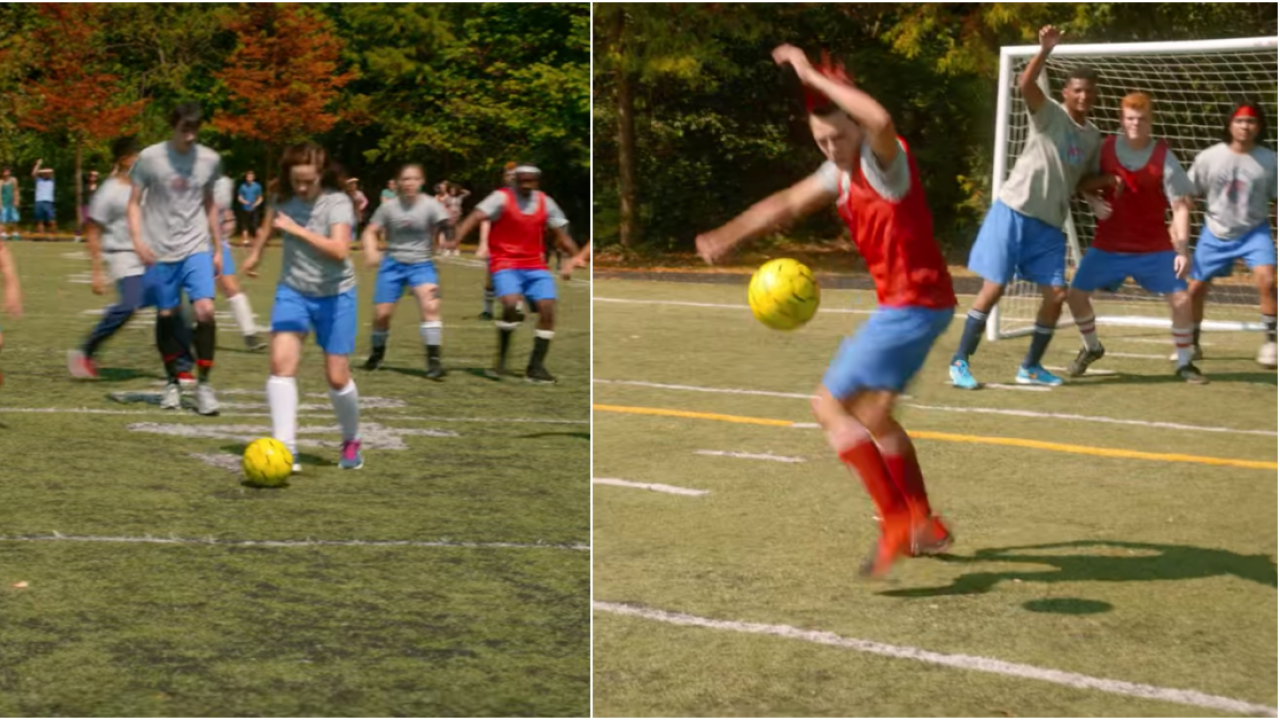 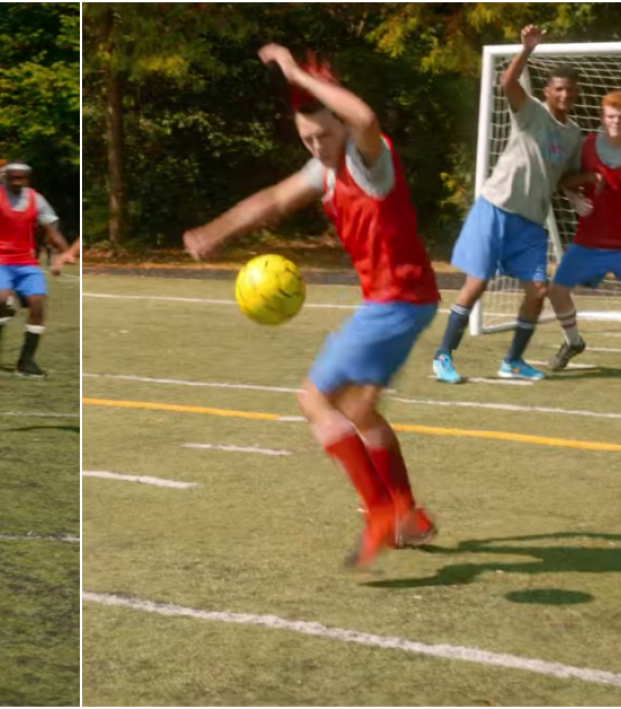 Cobra Kai is a ridiculously fantastic TV series. Based on the same characters from the beloved Karate Kid movies of the 1980s, the third season came out on Jan. 1 and I personally binged through it in just a couple of days. The over-the-top antics and rivalries wonderfully mirror the original films while also providing just enough nostalgia with old characters and cameos.

It’s been a couple of weeks since I finished watching Cobra Kai Season 3 and I can’t stop thinking about one scene in particular. It’s a soccer sequence that has to be one of the most WTF moments in sports film history — and it was kind of perfect.

“What’s a game of soccer without a little physical contact?” asked Samantha LaRusso to start one of the worst/best soccer scenes ever filmed for TV or movie.

In Cobra Kai Season 3, Episode 4 (The Right Path), tensions are heating up between members of Cobra Kai and Miyagi-Do. After the massive brawl that ended Season 2, teachers are keeping a close eye on those involved to keep the peace. But Sam sees an opportunity to attack Cobra Kai members while playing a game of soccer during high school PE class. It’s a cool callback to the soccer scenes in the original Karate Kid. Conveniently, the teams just so happen to be divided by the rival dojos.

Soccer has a long history of being portrayed on the big screen without any reverence to the beautiful game. Action sequences featuring soccer are rarely convincing — this was no different.

The insanity starts with Sam nutmegging an opponent, shoving him over and then — while ignoring the ball completely — going back over to stomp on the poor fellow she just pushed down. That’s an automatic red card in any match, but I guess VAR wasn’t in use at West Valley High.

Hawk, leading Cobra Kai FC, responds by scoring a goal without violence but whipping out the Cristiano Ronaldo “Siii” celebration. Hawk is the only one who shows one iota of soccer skill, but that’s not saying much.

As he’s running back after the goal, Hawk winks at his ex, who is uninterested. To make matters worse, his former best friend Demetri taunts him on the way back, eventually sweeping his leg for an unnecessary take-down away from the ball.

“I guess that’s why the Europeans call it foot-ball,” Demetri says to Hawk in one of the worst soccer-related quips you’ll ever hear.

At this point, Cobra Kai members realize they need to up their violence. Hawk headbutts Demetri going for a header, apparently unaware that a real soccer player would just throw an elbow in such a situation. Later, Hawk dribbles around an opponent only to flick the ball up to himself to kick the ball into the face of that same opponent (while a player on the opposing team posts up like it’s basketball).

Like Sam before, it was an incredibly pointless maneuver. Fortunately, Demetri cuts out the soccer portion and just kicks the ball straight at an opponent’s head a little bit later. We all know Demetri is the smartest character in the entire show.

The moment I hated most from the whole scene was when Sam is dribbling down the field — I use the term dribbling loosely, as she looks like she’s walking on stilts — and then stops the ball with all the grace of a baby deer learning to walk, causing two opponents to run into each other for some reason. Seconds later, Sam is smashing a flying kick to a dude’s face. If Sam can make a flying kick look convincing, why couldn’t she learn to make dribbling believable for a two-second clip?

At this point, the PE coach finally steps in to stop the madness, but any referee worth a damn would’ve called off the match long ago.

Here’s the entire sequence — all set to Moody Blues’ “Rock ‘N’ Roll Over You” — in case you don’t want to load up Netflix to watch it.

As you can see, it’s the most inane shit ever. To even call it a soccer scene is disingenuous to actual soccer. That said, it perfectly encapsulates the extravagant, melodramatic nature of the Cobra Kai series.

The entire series is just as absurd as the original Karate Kid movies, which I think is why both are so popular (remember when an old man beat the snot out of four kids dressed as skeletons?). Cobra Kai Season 3 builds off the ridiculous ending to Season 2 by ramping up the spectacle while simultaneously paying homage to the first movies. It’s impossible not to love. The appearance of Ali Mills near the end of Season 3 does a great job of highlighting how ludicrous the karate rivalry really is. (Let’s not forget the first appearance of soccer in Karate Kid was with Ali.)

When it comes to soccer scenes in Netflix shows, there is plenty to choose from (if you’re looking for actual soccer shows, they’ve got that too). It’s clear Cobra Kai’s creators focused more on making the karate look realistic than the soccer, but there is one thing Cobra Kai has gotten right with the beautiful game, on Twitter of all places.

The official Cobra Kai account tweeted out the above GIFs only to receive flak from asshats who demand the sport be called football instead of soccer. We’ve said it a million times and we’ll say it again: Soccer and football are the same damn thing. Americans don’t give a rat’s ass if you don’t like soccer, a British term to begin with. Cobra Kai’s Twitter account understands this and responded to one of the trolls in perfect Johnny Lawrence fashion.

can someone translate? we don't speak European.