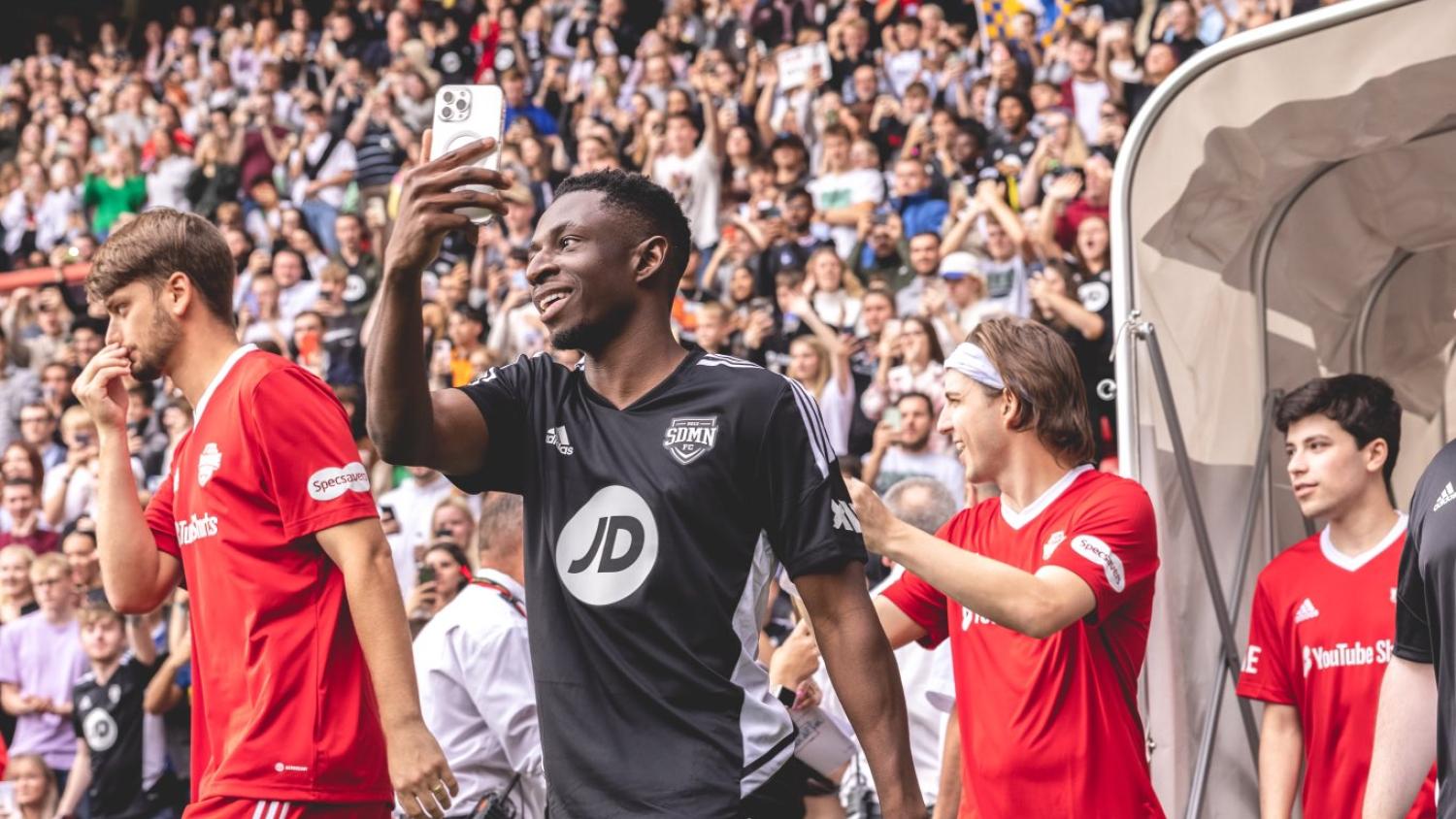 Who needs the Premier League when we have these guys?
@JDOfficial | Twitter

This was the fourth time the Sidemen have hosted a charity match and this year’s game helped raise money for Campaign Against Living Miserably, Teenage Cancer Trust, Rays of Sunshine and M7E.

Here were the starting lineups for Saturday’s game.

It only took 18 seconds for the entertainment to begin when one of the most flamboyant personalities, IShowSpeed, had a crunching tackle on KSI.

6th minute — YouTube All Stars Goal (1-0): It would be another tackle from Speed that set up the first goal from Chunkz. These might be amateurs but what a strike from the Beta Squad man.

9th minute — YouTube All Stars Goal (2-0): Niko scored a controversial goal where a fan ran on the field during the play but another classy finish. Yung Filly had great run to set up the goal drawing four defenders on him at one point.

12th minute — Sidemen FC Goal (2-1): An unlikely goal from Vikkstar123 brought the Sidemen within one. He’s scored from a penalty before in a charity match but this one from open play got the crowd going wild and the Sidemen back in it.

18th minute — Sidemen FC Goal (2-2): The main guys for the Sidemen linked up well for this goal. Manny showed great pace down the left wing, finding Simon in the middle who did a clean give and go to Tobi who smashed it by Cal the Dragon.

26th minute — YouTube All Stars Goal (3-2): An unbelievable strike from Yung Filly. About 20 yards out and roofed it to the top 90.

32nd minute — Sidemen FC Goal (3-3): Simon caught Cal the Dragon creeping out. Cal had been claiming crosses all first half but got too ambitious this time. This was the seventh Sidemen charity goal for Simon.

During the first half it became apparent that Speed doesn’t appear to know the offside rule.

PLEASE CAN SOMEONE EXPLAIN THE OFFSIDE RULE TO SPEED pic.twitter.com/ZM7DdlfYRp

— Has the Referee or VAR made a poor decision? (@PoorEPLreferees) September 24, 2022

41st minute — YouTube All Stars Goal (4-3): Theo Baker with some fancy footwork to get around KSI and to put the YouTube All Stars back in front. The assist came from American TikTok sensation Noah Beck who played solid game.

49th minute — Sidemen FC Goal (4-4): Tobi gets his second goal of the game after a quick restart and switch of field from Simon. Tobi calmly took the ball around Cal the Dragon.

64th minute — Offside Goal: Speed thought he had scored but he was offside but that didn’t stop the celebration. Wow did everyone watching want that goal to count for the American.

67th minute — Sidemen FC Goal (5-5): Cal the Dragon had back-to-back excellent saves but then had a howler as Simon got his second of the game to make it 5-5.

71st minute — Sidemen FC Goal (6-5): ChrisMD gets his goal courtesy of another disastrous moment from Cal the Dragon. ChrisMD had been frustrated and shut out for 70 minutes but finally got his moment to score his third ever goal in a Sidemen Charity match.

73rd minute — YouTube All Stars Goal (6-6): Niko ties things up at six while people were a little distracted at Speed standing over KSI. A shot from Chunkz was spilled and Niko cleaned it up.

85th minute — Sidemen FC Goal (7-7): This was one of the best goals of the game as Tobi found his brother Manny with a ridiculous outside of the foot cross that the younger brother smashed home with a header.

88th minute — Sidemen FC Goal (8-7): Simon completes his hat trick catching the goalkeeper out once again to score a sensation game-winner. The perfect end to a wildly entertaining affair.