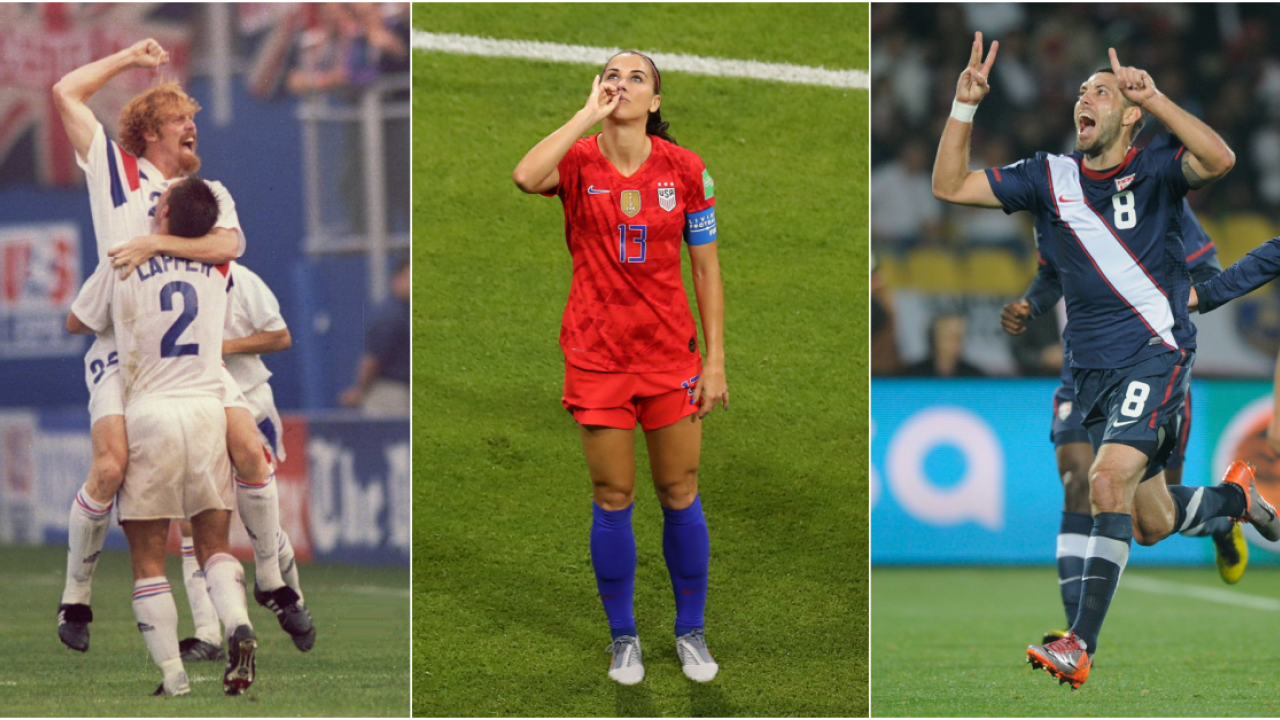 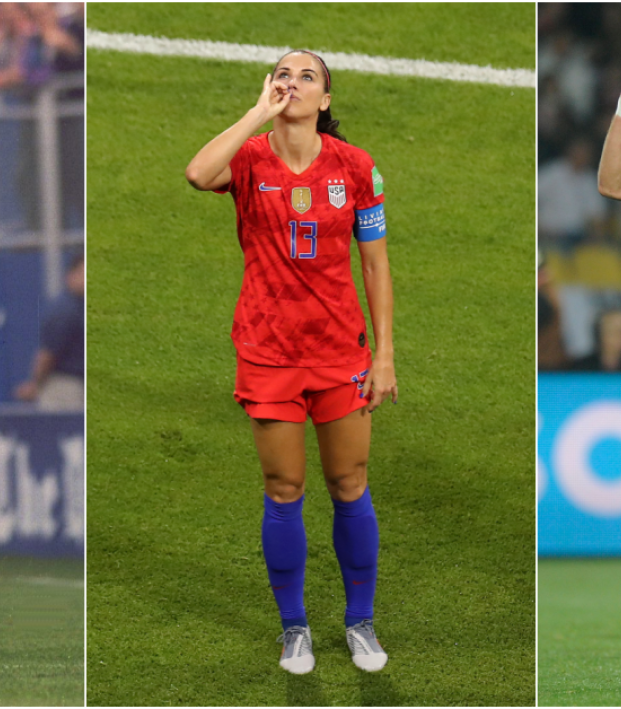 5 Times The U.S. Dunked On England In Soccer

There exists a Special Relationship between the United States and England. Though the American colonies rebelled and gained their freedom from British rule in 1776, the nations have long since become allies, their shared language and religion serving as salve.

These days, many Americans are obsessed with the British monarchy, while many Brits are equally obsessed with American culture. This Special Relationship with the UK extends through politics, economics, culture and religion.

It stops at soccer.

When it comes to the beautiful game, the U.S. and England have a strange relationship.

On the one hand, you’ve got a large subsection of American soccer fans who are Euro snobs, infatuated with British football. They insist on using words like football, pitch, boots and away match.

On the other, you’ve got American soccer fans who want the country to embrace its unique footballing culture, which features a melting pot of European, Mexican and South American characteristics.

Looking at the other side of the pond from the States, it appears the English look down upon us Americans and our silly soccer. Never mind the Brits invented the word, anyone who deigns to call the sport “soccer” must be excoriated as an oafish brute undeserving of being a fan of the world’s game.

Seattle Sounders slander is buried as deep into English culture as tea and crumpets pic.twitter.com/TmfPYCgbJD

Mostly, it’s all in fun. It’s a sport after all, regardless of whether you call it soccer or football. We can all have a good time with lighthearted trash talk.

England, of course, typically wins when it plays the U.S. in men’s international soccer. They basically invented the sport, so it’s not too much of a surprise the Three Lions have beaten the Yanks eight times in 11 meetings. Then again, the U.S. women’s national team holds a 12-4-2 record over the Three Lionesses. And the USMNT has never lost to its former colonizer in two previous men’s World Cup meetings. It’s a fun rivalry, and a stark contrast to the rivalry between the U.S. and Mexico, which strikes much closer to home.

On November 25, 2022, the Special Relationship rivalry will reach new levels as England and the U.S. face off in the group stage of the men’s World Cup for a third time.

With that in mind, and because we love to make fun of the UK, we’ve compiled a list of five times the U.S. dunked on England in soccer.

England and the U.S. met at the World Cup for the first time in the 1950 first-round group stage. After being too good to join the World Cup for its first three editions, this was England’s first World Cup. The Americans finished third in the inaugural competition in 1930, went one-and-done in 1934 and pulled out of the 1938 competition.

England was expected to win the whole tournament given its pedigree. The Three Lions beat Chile 2-0 in their opener while the Americans — with a team made up of dishwashers and mailmen — fell 3-1 to Spain, setting the stage for what some consider to be the biggest upset in World Cup history.

This match was so wacky a book and a movie were made out of it. England was clearly the better team, with six good looks at goal by the 12th minute, including two that struck the post. Against the run of play, a Haitian-born forward by the name of Joe Gaetjens scored a diving header in the 38th minute for the U.S. Despite piling on the pressure, England couldn’t find a way past keeper Frank Borghi and the Americans held on to win.

The stunning defeat proved England was not the superior soccer powerhouse it believed itself to be. Though a dominant force in the early days of international football, the world had passed it by. England lost to Spain 1-0 in the final match of the group stage and finished even with the U.S. on two points. Spain advanced out of the group into the final group stage (the four group winners played a round robin instead of a knockout round), where La Roja finished dead last and Uruguay claimed its second World Cup title.

The U.S., meanwhile, wouldn’t win another World Cup match until 1994, a match that resulted in the assassination of the opposition’s captain after he scored an own goal.

Though the USMNT has struggled against England, the USWNT has never had much trouble against the Three Lionesses. Outscoring England 40-13 in 18 meetings, the teams have met twice at the Women’s World Cup. The first was a 3-0 thrashing in the 2007 quarterfinals with goals from Abby Wambach, Shannon Boxx and Kristine Lilly. The second was an unforgettable meeting in the 2019 semifinals.

The U.S. dominated its group at the 2019 Women’s World Cup (18 goals for, none conceded) but squeaked by Spain and France 2-1. England likewise won its three group-stage matches before crushing Cameroon and Norway by 3-0 score lines. With the Americans coming off an emotional win over tournament favorite and host France, it looked like football might finally be coming home. What transpired that night in Lyon was one of the best matches of the tournament.

It took 10 minutes for the U.S. to score the opener, Kelley O’Hara’s cross finding the head of Christen Press. Nine minutes later, Ellen White was able to elude Abby Dahlkemper to equalize.

The winner came from Alex Morgan, teed up wonderfully by a chip into the box from Lindsey Horan. Morgan’s flying header was followed by the most epic celebration in USWNT history since Brandi Chastain ripped off her jersey in 1999. The No. 13 ran to the sideline, stuck out her pinky and took a sip of tea, drinking in English tears.

No. 3️⃣: @alexmorgan13 scores against England on her birthday, and celebrates with some tea. pic.twitter.com/qNodIZbQnF

The celebration immediately went viral. Some — mostly England fans and misogynists — hated Morgan for the jab, but most folks just loved it.

After the 2-1 win over England, the USWNT went on to beat the Netherlands 2-0 in the final for the nation’s fourth World Cup trophy. England remains without having ever reached the final of a major tournament.

The U.S. has an abysmal record against England outside of World Cup play. We’re talking one win and eight defeats in nine meetings bad. But let us not forget about that one.

Back in the early 90s, hopes were high England had turned a corner on the world stage. The Three Lions finished fourth at the 1990 World Cup, their second-best finish after winning it all on home soil in 1966. What followed instead was a shockingly poor period that included a shutout defeat to the USMNT.

England failed to win a single match at Euro 1992 then struggled in qualifying for the 1994 World Cup, which England fans felt they’d have a good time at given the shared language with the host nation. During qualifying, they made a quick stop to the U.S. for the United States Cup, an international competition the Americans put together to help create interest in the upcoming World Cup it would be hosting.

The USMNT had surprisingly won the 1992 edition of the tournament against Italy, Portugal and Ireland, but in 1993 Brazil, Germany and England came to the States. The U.S. lost 2-0 to Brazil and 4-3 to Germany, but things were different against England at Foxboro Stadium outside Boston. The Americans had themselves a second Boston Tea Party.

A diving header from Thomas Dooley and a towering header by Alexi Lalas saw the U.S. beat England 2-0. Lalas soared over all the England defenders who didn’t even seem interested in challenging the lanky redhead in the air. It was the soccer equivalent of a slam dunk.

England went on to finish last in the U.S. Open Cup (the Americans finished third). The Three Lions then failed to qualify for the 1994 World Cup, probably because they were too embarrassed to return to the country where they were beaten so badly the year before.

“Ted Lasso” has become a beloved series on both sides of the pond. The feel-good show requires no knowledge of soccer to enjoy, though it certainly helps to have a passing understanding of the game and the differences between English and American cultures.

In the first episode of Season 1, Ted Lasso is invited into his boss Rebecca Welton’s office where she offers him some tea.

Ted’s reaction to the hot brown water sets the tone for an entire series full of jokes at the expense of the English.

Seriously though, why would anyone drink hot tea over coffee in the morning? It’s a question Ted repeatedly asks throughout the series, at one point calling it pigeon sweat.

When the draw came out for the 2010 men’s World Cup, the British tabloids celebrated an EASY group (England, Algeria, Slovenia, Yanks). Maybe it wasn’t the strongest of groups, but the Three Lions couldn’t find a way to top it.

In the opening match of the group, England faced the U.S. in a World Cup for the first time since that disastrous 1950 match. It was clear the English players weren’t going to take the Yanks lightly this time around, and Steven Gerrard made a great run into the box to dink the ball past Tim Howard in the fourth minute.

Allowing such an early goal in the first match of the tournament could have caused some teams to fold, but not the Americans. While hardly dominant in the match, Clint Dempsey worked a bit of space for a shot in the 40th minute by turning Gerrard inside out. His shot from about 25 yards out was straight at keeper Rob Green, who proceeded to allow the ball to bounce off his palms and into the back of the net.

Thanks to a memorable 91st-minute winner over Algeria, the Americans topped the group while England finished second, though neither made it to the quarterfinals. Regardless, denying England a victory — and forcing the Three Lions to play Germany in the Round of 16, where they lost 4-1 — felt like a win for many Americans.

Americans will hope for one more win over their former colonizers on Nov. 25 in Qatar. Until then, we’ll continue relishing these times the U.S. beat the English in the game they invented — while also ignoring those 10-0, 8-1, 6-3 and 3-0 losses we conveniently left out of this story.