World Cup Day 2 Predictions: Group B And Uruguay Vs. Egypt

The18 June 14, 2018
Day 2 of our World Cup predictions sees us predicting Mo Salah's return as Egypt takes on Uruguay. Then we get some Group B action with Morocco vs Iran and Portugal vs Spain.

Day 2 of the World Cup has some tasty matchups and questions. How will Mohamed Salah fair in his first match back since Sergio Ramos put a hit on him in the Champions League final? Will Iran and Morocco live up to the hype as the most offensive match of the World Cup? Will Sergio Ramos continue his bad-boy mentality when he soars for headers against Real Madrid teammate Cristiano Ronaldo? The18's Connor Fleming (@conmanfleming), Bryce Badwan (@bbadss) and Travis Yoesting (@travisyoesting) give their takes on the day's action. 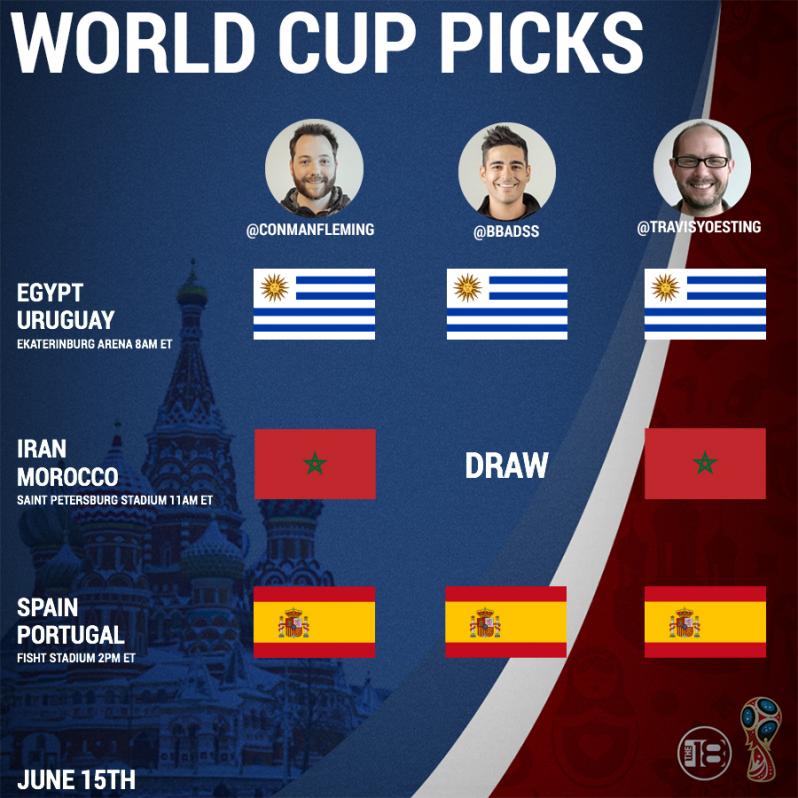 Connor Fleming: Uruguay - Egypt's defensive style will trouble other group opponents, but not the firepower of Uruguay.

Bryce Badwan: Uruguay - Expectation has never stewed well with Uruguay. They also haven't gotten 3 points in their opening match at the last 5 World Cups. They should buck the trend here.

Bryce Badwan: Draw - The defensive specialists. I don't see either team being able to break each other down. We're in store for a 0-0 snoozer.

Travis Yoesting: Morocco - In a defensive battle, Morocco just does enough to get a vital three points, 1-0.

Connor Fleming: Spain - There's no Julen Lopetegui but that's fine, you only need Isco for a proper disco.

Bryce Badwan: Spain - Yeah, they just fired their coach. But I don't see much out of Portugal. Limit Ronny and Bernardo Silva and Spain should squeeze out a big three points.

Travis Yoesting: Spain - Spain's defense shuts down Cristiano Ronaldo and the offense scores once and goes into possession mode, 1-0.