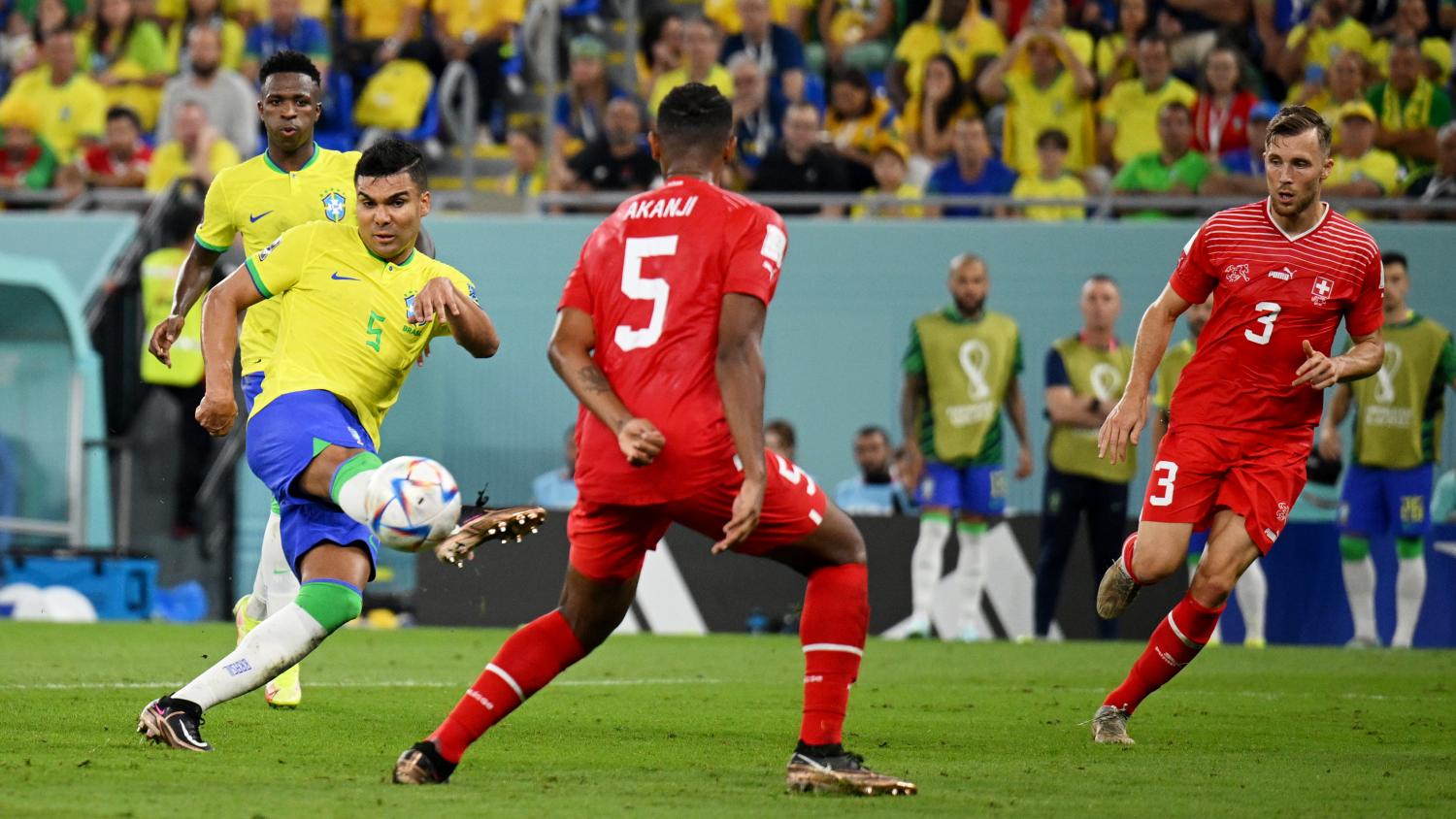 Brazil is trying to sweep the contenders for Goal of the Tournament.
Getty Images

DOHA - Doha’s Stadium 974 thrummed to the samba beat on Monday night as Brazilian fans brought Latin American swagger to this patch of Qatar and Casemiro fired Brazil into the knockout stages of the 2022 World Cup finals with a 1-0 victory over Switzerland.

The midfielder’s spectacular 83rd minute goal sent Brazil through with a game to spare and lit a touch paper to a contest that up to then had struggled to smolder.

But the sea of Brazilian fans won’t care about any of that as 80 or so minutes of sloppy passing and directionless play was forgotten in the hysteria of the final minutes.

This was too nice by Casemiro pic.twitter.com/Ahz1eqlLAq

Tens of thousands of yellow shirts had painted the inside of this quirky stadium bright yellow in a frieze of canary, broken up only by small pockets of local fans in traditional white robes and a smattering of red Swiss shirts. It was hard to believe this was a match being played on the Arabian Peninsula, for it had every setting of a home game for the Brazilians — from the thunderous roars accompanying every fancy move to the rhythmic beat drummed out throughout.

But if the supporters had planned for a party, the student of soccer might well have suspected otherwise. The two previous World Cup meetings between these two sides had ended in draws — 2-2 in 1950, and 1-1 in 2018. The Brazilians had only won three of their nine match-ups with Switzerland in total, with four drawn and two losses.

This Monday night clash looked to be heading for another stalemate before Casemiro’s moment of pure magic.

With Brazil increasingly desperate, half-time substitute Rodrygo played a first time ball to Casemiro who struck it with the outside of his foot and it glided — in time-honored Brazilian fashion — past Yann Sommer in goal, the Swiss watching in horror as it bulged the side of the inside of his goal.

This strike by Casemiro was pure pic.twitter.com/CpsVKtdzV0

While Rodrygo provided the assist, Casemiro and Brazil owe a huge debt of gratitude to Vinícius Jr for the goal – Brazil’s newest superstar had drawn three increasingly desperate defenders onto him which created space for the goal.

Winded by a cruel moment of Brazilian brilliance, the Swiss slumped and the match could well have ended two or 3-0, but that would have been unduly harsh on the Europeans who, for the most part, blunted their opponents. The Swiss, though, can take heart from their performance and a win against Serbia in their final group match will send them through along with Brazil, and a draw could even be enough.