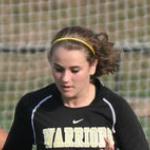 Samantha Harvitt October 13, 2016
The creepy clown craze has made its way to the soccer pitch.

We were all freaked out after hearing about people dressing up as clowns in their neighborhoods. Then, everyone’s worst nightmare got ten times worse after the news broke about clowns kidnapping children and bringing them into the woods. Halloween might be around the corner, but people are still strongly against clowns and the latest “creepy clown craze.” Let's hope that everyone avoids the clown costumes for this year's upcoming holiday…

Recently, there was a clown sighting at St. Francis High School in Minnesota. This clown sighting was not intended to be a threat, but it was interpreted differently. Ben Hildre, a volunteer coach for the junior varsity girl’s soccer team at St. Francis HS, wore a clown mask to the team’s last practice. Many of the girls laughed and posted pictures of the freaky clown on their social media accounts.

The pictures taken of Hildre at practice eventually spread through the school causing him to get fired hours before the team’s final game. The picture of Hildre dressed as a clown was posted on Twitter with the caption “Clown Sighting: St. Francis High School soccer fields.”

Several students did not laugh along with the girl’s soccer team once they encountered the tweet. Since other students were not included in the joke, the school received various reports about students feeling scared and threatened.

“The issue is that the timing was terrible, to them, it was all in good fun…but for someone else, seeing that could be very disturbing. I think it was an irresponsible decision,” said superintendent Troy Ferguson.

Ben Hildre has been removed as the coach, forcing him to miss his team’s final games. Ferguson is open to the idea of having Hildre return in the future, but for now nothing has changed.

Moral of the story: don’t dress up as a clown, not now, not ever.