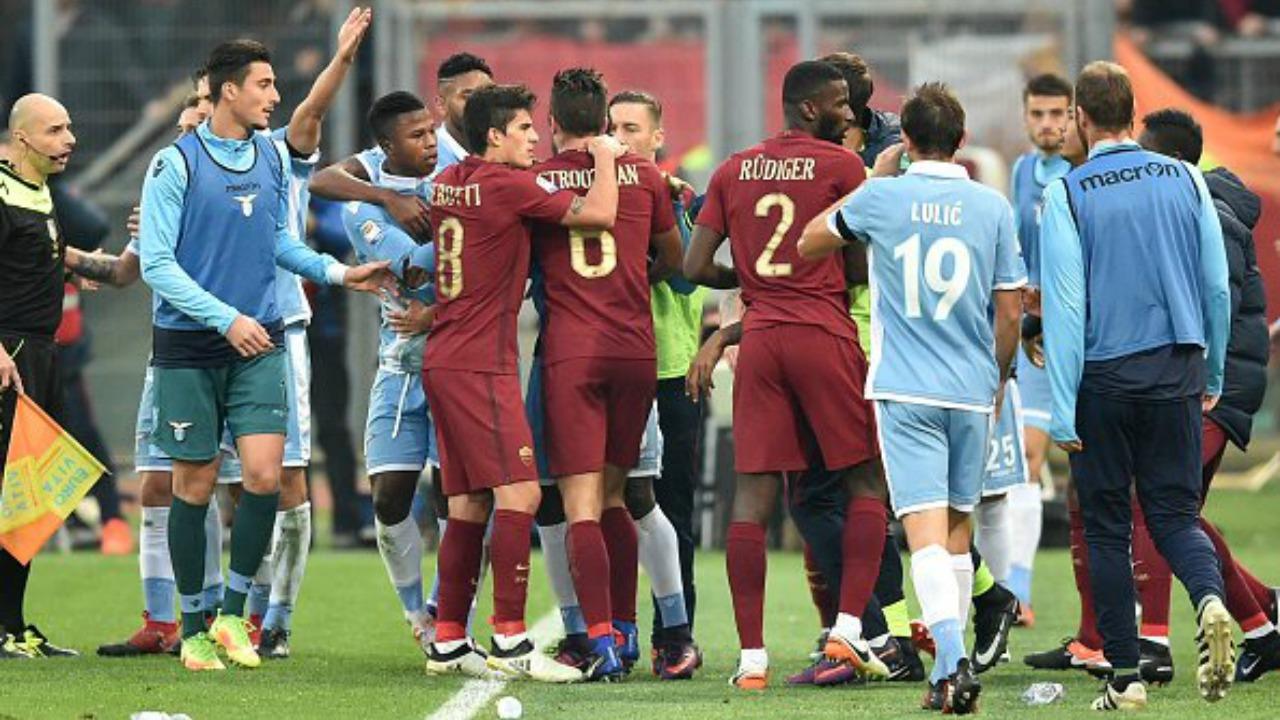 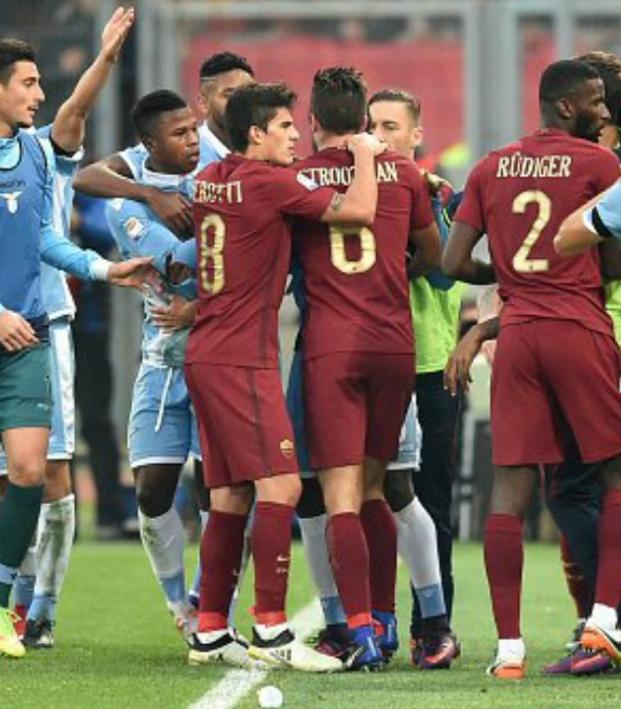 Italian Football Once Again Plagued By Racism And Bigotry

Huw Thomas December 6, 2016
The Rome derby was rife with controversy, the worst of which should dominate headlines.

The Derby della Capitale was drenched in narrative. In a sporting context, the word narrative might well be overused to the point of meaninglessness, but there’s not many other ways in which to focus on the 90-minute battle between Lazio and Roma that took place on Sunday.

In purely sporting terms, it was a fascinating game. Roma, second in the league and easily fulfilling their role as perpetual also-rans, came up against arch-rivals Lazio, who were themselves only a point behind.

An expensively assembled and often-faltering team, Roma were missing one of their key players in Mohamed Salah. Lazio, a more workmanlike but well-oiled machine, featured a skilled front three who were endeavoring to fly under the radar.

A victory here would increase Roma’s lead or allow Lazio to leapfrog their eternal enemies. As many of the top sides continue to stutter, it was an important match for those entertaining hopes of a fight for the title.

It was made all the more important due to the perplexing situation with the fans. Though both sides share a stadium, this was classified as a Lazio home game. But the hard-core, dedicated sections of both supporters – the ultras – were unhappy.

The Stadio Olimpico has recently been fitted with Plexiglas screens along each side of the curvas, the bookends of the stadium favored by the most vocal Italian fans. This move was designed to prevent trouble between sets of supporters but has proved almost universally unpopular. For months, the battle between ultras, owners and footballing authorities has raged on.

In a derby, especially in one as renowned as the Rome derby, the interplay between the opposing fans is an attractive draw for the neutral spectator. Over the years, this match in particular has drawn more than its fair share of negative attention. But this year, with the disagreements still looming and the Plexiglas still present, the stadium was sapped of supporters. Many Roma fans simply did not turn up. There was a strange atmosphere inside the cavernous ground.

But there was no doubt about the importance of the game. Rather than showing their support on the day, the ultras had gone to the training camps for both sides and impressed on the players their desire that the rival team should not only be beaten, but that they should be crushed.

Indeed, there was a quickly-spread quote emerging from the Lazio fans that, for them, this was not just a football match, but it was “ethnic war.” It would be a sentiment which would become increasingly telling as the dust settled.

The atmosphere inside the Stadio Olimpico, half-filled and ghostly quiet, likely favored the away side, Roma. Over the years, the venomous environment has been intimidating, part and parcel of the adversity the visiting side must overcome. If the away side can shrug off the screams of the home fans, they stand a good chance of winning.

With so many fans absent, the players could almost hear everything in the ground. The sting was taken out of the tail. One of the biggest factors in the derby was neutralized before a ball had even been kicked.

Perhaps this reflected in the nervous way Lazio started the game. Almost immediately, Lucas Biglia gave away a free kick for a clumsy challenge. Though Lazio seemed the better side in the first half, it was a scrappy, ugly game. Neither side seemed able to find their rhythm, perhaps in part to the odd atmosphere, perhaps because they had been forcibly told the consequences of losing.

After halftime, Roma began to settle quicker. Edin Dzeko spurned two decent openings. But it was a Lazio error that proved the catalyst for the calamity which followed. Wallace, the young Brazilian center back, tried to dribble the ball out of the Lazio defense. He was dispossessed by Kevin Strootman, who then promptly slotted home to open the scoring. Had there been many Roma fans inside the stadium, they would have erupted.

Over the past two years, Strootman has been plagued by injury. Once a burgeoning talent of world football, the Dutchman has barely played in the last 24 months. Here, he seemed almost back to his best. But for all the glory and plaudits he earned with the goal, he threw them away seconds later. As he strolled back along the pitch, passing the Lazio bench, he seemed to flick water across a substitute, Danilo Cataldi. It was clearly calculated, cunning and petty.

Cataldi erupted in fury, lunging for Strootman. The Roma player fell to the ground theatrically. It was the cue for both sides to go wild. Both teams flew into one another, the type of brawl which is always bubbling away in derby matches, threatening to burst. Strootman received a yellow card and Cataldi received a red. Of course, being as he was only a substitute, Lazio kept eleven men on the field. But the damage was done. Everyone was angry.

Navigating the tensions, Roma doubled their advantage. Radja Nainggolan’s long range shot managed to beat the Lazio keeper. The game continued to simmer but the score remained two nil to Roma, who extended their league and took a big away victory against their fierce rivals. The story should have ended there, but it didn’t.

Senad Lulic is no stranger to the derby. He was the man who scored the winning goal the last time Lazio beat Roma, in the 2013 Coppa Italia Final. Following the end of the game, he was being interviewed on television and was asked about the pre-game comments of Antonio Rudiger.

Rudiger had downplayed the threat of Lazio, claiming that the Roma players didn’t have much of an idea about Lazio’s players or manager. The comments were inflammatory, certainly, but were easily lost amid the din of the derby. Not so Lulic’s response.

Rudiger, the Bosnian said, “was selling socks and belts” in Stuttgart two years ago and was now “playing the phenomenon.”

Immediately, Lulic fought back against accusations that his remarks were racist, that they painted Rudiger as a crude stereotype of the African street sellers which have so negatively typified the discussion of immigration in Italy in recent years. Lulic, as a response, suggested that “white people also sell socks.” It was a pathetic response. Either the comments were demonstrably racist, profoundly ignorant or both.

Quite rightly, Lulic will be fined for his comments. But rather than taking the comments in isolation, they serve to peel back the scab which never seems to heal in Italian football. Though many national newspapers were quick to condemn the comments, as well as the weak apology offered by the club (Lulic himself did not apologise), these condemnations do little to address the institutional racism present in Italian football.

Though they can fine and ban Lulic as much as they please, the Italian FA is rife with its own issues of prejudice. Carlo Tavecchio, the federation’s own president, has delivered spectacularly prejudiced, racist and stupid comments in the past. He remains in office. Every year there are racist incidents which are half-heartedly dealt with. That the FA would take a moral high ground without addressing their own flaws prevents Italian football from becoming a progressive institution.

The Derby della Capitale is one of the finest matches in the Italian footballing calendar. It is a match right out of history, a brilliant fixture which will justifiably attract attention the world over. Even Strootman and Cataldi’s actions, stupid as they were, can be considered relatively harmless. They’re part of the derby day theater.

But the post-match comments from Senad Lulic and the weak condemnation from the Italian federation are informative. Until Italian football is ready to address these issues, to look inwards and combat its own bigotry, Serie A will be a relic. As rich and fascinating as Italian football is, this week’s biggest match has demonstrated the issues which continue to hold it back. The derby told us a lot about the state of the league but for all the wrong reasons.