Cristiano Ronaldo, Real Madrid Remind Us Who The Champions Are Against PSG

Travis Yoesting February 14, 2018
Ronaldo and Real Madrid overcame an early deficit to score a 3-1 win in the first leg against PSG.

What crisis in Madrid? All’s well for Zinedine Zidane, Cristiano Ronaldo and Real Madrid after an impressive 3-1 victory over Paris Saint-Germain in the first leg of their Champions League Round of 16 tie on Wednesday. While there’s still a second leg to play in Paris, the Real Madrid vs PSG fixture is now the defending champions’ to lose.

Perhaps the most highly anticipated Champions League Round of 16 match of all time started out fantastically for PSG, whose fans were running rampant in Madrid before kickoff. The French champions took a lead in the 33rd minute through, of all people, Adrien Rabiot. It was an important away goal for PSG, but Unai Emery’s side couldn’t hold on against the fourth-place team from La Liga.

Real Madrid came storming back thanks to Ronaldo and substitute Marco Asensio, who set up two goals in his 11 minutes on the pitch. Ronaldo scored two goals, taking his tally to 101 in the Champions League with Real Madrid, 116 in total. Marcelo, who was the star of the first half with his blood-curdling screams and insane passes, added one more goal late to give Los Blancos a bit of a cushion heading to the return leg. 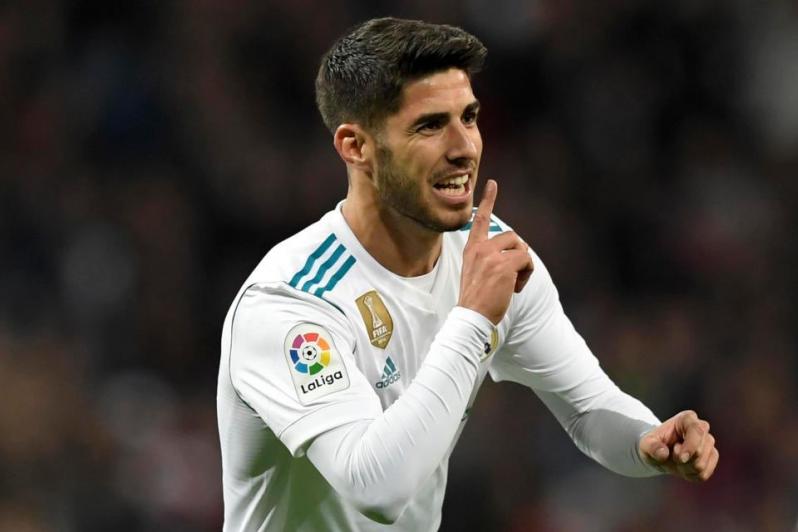 Paris Saint-Germain might complain that Real Madrid was awarded a soft penalty while Sergio Ramos got away with a clear handball in the box, but on the bright side they don’t have to defend a four-goal lead in the second leg against a Spanish side this year.

The match started off with both sides playing physically. Neymar, Isco and Giovani Lo Celso were all booked before Rabiot opened the scoring.

While some might try to give Neymar a clever assist on the goal, it clearly went off the defender.

The Real Madrid vs PSG match began shifting toward the home side late in the first half, when Toni Kroos went down easily under pressure from Lo Celso to earn a penalty kick that Ronaldo was always going to take. Despite the ball taking a weird bounce from Ronaldo’s plant foot, the Portuguese winger still smashed it into the back of the net.

With that strike, Ronaldo became the first player to score 100 goals for a single team in Champions League play. (Lionel Messi has 97 for Barcelona.)

Most of the second half played out in a deadlock, with both sides wanting to take an advantage into the second leg but unable to find a go-ahead goal.

Both managers made interesting moves with about 25 minutes to play. First, Emery took central striker Edinson Cavani off for right back Thomas Meunier, pushing Dani Alves up to midfield. Not long after, Zinedine Zidane brought in winger Gareth Bale, who many were surprised started on the bench, for striker Karim Benzema. For PSG, the move meant they were shifting to a more defensive posture with the threat of a killer counterattack. For Real Madrid, it meant adding speed and power against tiring legs.

But it was the substitution Zidane made in the 79th minute that really changed the match, with Marco Asensio providing the spark Real Madrid needed when came on for Isco.

Asensio set up the match-winning goal in the 83rd minute. The Spaniard ignored an overlap from Bale and fired in a cross that deflected off goalkeeper Alphonse Areola and into the path of Ronaldo, who kneed the ball into the back of the net like he was practicing it all last night. Areola had a good match, but he could’ve done more to keep the ball away from Ronaldo.

Three minutes later, Asensio picked out Marcelo from the corner and the Brazilian finished impressively to give Los Blancos a two-goal advantage heading into the second leg.

Neymar with the shot boy pic.twitter.com/lAVRYk5aHV

The second leg of Real Madrid vs PSG is March 6.