Travis Yoesting July 7, 2022
Megan Rapinoe was among 17 recipients of the medal on Thursday at the White House.

Megan Rapinoe became the first soccer player to receive the Presidential Medal of Freedom, President Joe Biden bestowing the highest civilian award in the country on the USWNT star on Thursday at the White House. Biden also explained why Rapinoe was given Presidential Medal Of Freedom honors.

Rapinoe first learned she would be receiving the medal while in Denver on national team duty last month. She traveled to Washington, D.C., to receive the award despite having to miss the USWNT’s match against Jamaica on Thursday evening in Mexico.

Three years after saying she’s “not going to the fucking White House” in response to a Twitter feud with former President Donald Trump, Rapinoe arrived at the White House in a marvelous white suit with a special message stitched into the lapel (more on that later).

Biden and the White House held a ceremony that lasted just under an hour to honor Rapinoe and 16 other recipients of the Presidential Medal of Freedom (three were given posthumously). Simone Biles was the only other athlete receiving the honor, becoming the youngest-ever recipient at 25.

Why Rapinoe Was Given Presidential Medal Of Freedom

President Biden spoke about each of the recipients and elucidated why Rapinoe was given the Presidential Medal of Freedom, which is awarded to those who have made “an especially meritorious contribution to the security or national interests of the United States, world peace, cultural or other significant public or private endeavors.”

“Beyond the World Cup titles and the Olympic medals, Megan is a champion for (an) essential American truth that everyone — everyone — is entitled to be treated with dignity and respect,” Biden said in prepared remarks, though he ad libbed plenty. “Megan did something really consequential, she helped lead the change for perhaps the most important victory for anyone on her soccer team, or any soccer team: equal pay for women.”

As Biden highlighted, Rapinoe’s on-the-field accomplishments are great: two Women’s World Cup titles, one Olympic gold medal, 2019 Ballon d’Or. What makes Rapinoe special is her accomplishments off the field, where she’s helped the USWNT win equal pay while also being a strong advocate for LGBTQI+ rights and racial justice.

“Megan, like Simone (Biles), I hope there is room for this medal between all the other awards you and Sue have received during your remarkable careers,” Biden said, referring to Rapinoe’s fiancée Sue Bird.

Don’t mind us, just something in our eye…

So proud of you, @mPinoe

Before flying to D.C., Rapinoe spoke about becoming the first soccer player to receive the award.

“I’m not one you guys know to talk about haters and all that. It’s not really about the haters, it’s more about validating this push for equality and the rights and freedoms for everyone.”

Even while receiving the award on Thursday, Rapinoe was making a statement. Stitched into her lapel were the letters BG, a message of solidarity for Brittney Griner, the WNBA superstar who has been imprisoned in Russia since February. On Thursday, Griner pleaded guilty to drug charges in a Russian court for a small amount of cannabis oil in her luggage when she arrived in Russia to play basketball.

Rapinoe posted on Instagram that the message to BG was the most important part of the day. Many have pointed out that had the NBA equivalent of Griner, LeBron James, been imprisoned in Russia, he’d have been home months ago. 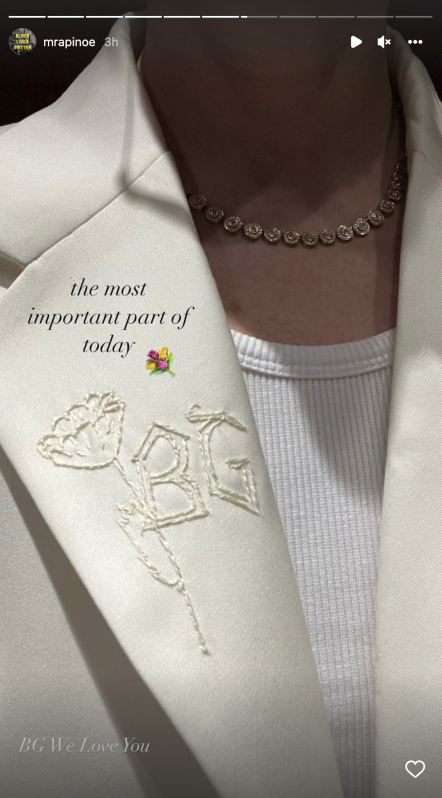 The fight for equality never stops, even while receiving the highest civilian honor in the country.

While Rapinoe is Stateside, the rest of the USWNT was scheduled to play on Jamaica on Thursday night in the Concacaf W Championship in Mexico. The tournament serves as qualifying for the 2023 Women’s World Cup and 2024 Olympics. Rapinoe will join back up with the squad for the match against Mexico on July 11.