Patrice Evra’s Punishment For Kicking A Fan Was Depressingly Light

Travis Yoesting November 10, 2017
Evra was banned from UEFA club competitions and his contract with Marseille terminated after assaulting a fan before a match.

The Patrice Evra punishment for kicking a fan has been handed down and it’s not good for the former French international defender, but it could have been much worse. Evra was banned from UEFA club competitions through June 30, 2018. Soon after, Marseille announced Evra’s contract had been terminated by mutual consent.

“By mutual agreement, Olympique de Marseille and Patrice Evra decided to end their collaboration,” a statement on the Marseille website read. “The player's contract is officially terminated with immediate effect.”

Of course, anyone who’s ever been in a relationship knows it’s never really mutual. Regardless, it’s hard to see Evra’s career continuing anytime soon. The 36-year-old former Manchester United and Juventus left back will have a hard time finding a club wanting to sign an aging player who attacked his own fans.

But that’s not to say it’s impossible. The UEFA ban only applies to European club competitions so Evra could conceivably sign with another team and compete domestically. He could also go to another continent; nothing is stopping Evra from making a big-money move to China. 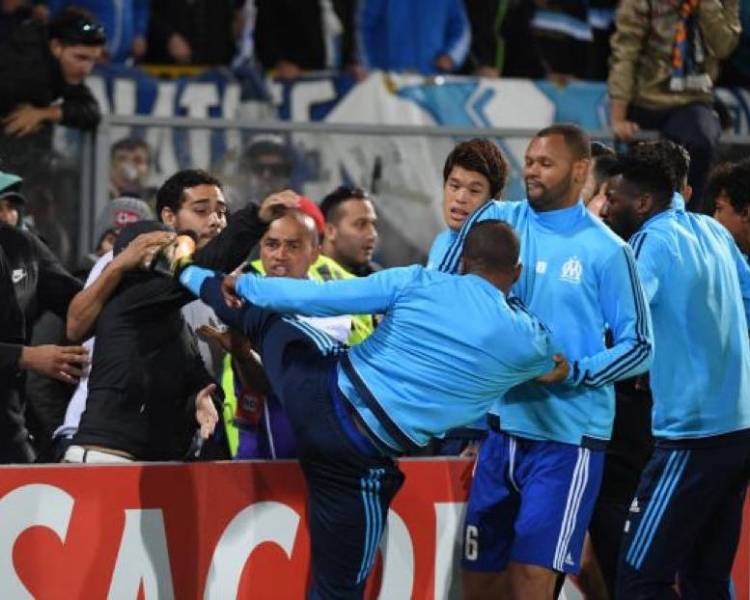 The interesting thing is the severity of the punishment — a ban from a cup competition equating to, at most, 11 matches.

I think most level-headed people would agree assaulting a fan is much worse than harming another player during the run of play. Yet the Patrice Evra punishment pales in comparison to that of Luis Suarez when he chomped down on Giorgio Chiellini during the 2014 World Cup. Suarez was banned from all football-related activities for four months, plus additional international matches and a fine more than five times as much as Evra’s.

Suarez’s bite was more public and not his first infraction, but trying to get an edge during a game is nothing compared to trying to knock the head off of a paying fan. Former EPL hard man and current actor Vinnie Jones was once banned for six months just for commentating on a video that glorified violent tackles on the pitch.

If you want to find a similar incident, look no further than Manchester United’s Eric Cantona kung-fu kicking a Crystal Palace fan in 1995. Cantona was given a nine-month ban from the sport and forced to do 120 hours of community service.

So the Patrice Evra punishment doesn’t seem to stack up to all the others. At most 11 matches and more likely closer to four or six is a slap on the wrist from UEFA. Evra and Marseille have said fans were behaving inappropriately — Marseille was fined for allowing the fan to get onto the pitch — but physically attacking someone is never appropriate, ever.

Realistically, Evra's career should be over. But it's not. He could be playing as soon as any club wants to sign him.

It will be interesting to see if any clubs are willing to sign Evra at this point. Will he be ostracized like Colin Kaepernick or given more chances like Greg Hardy?