The One Exercise Program Reducing ACL Injuries By 90 Percent In Women.

A lot of amazing athletes have torn their ACLs. Derrick Rose, Adrian Peterson and Tom Brady just to name a few. It’s probably the biggest fear for any athlete who relies on their legs, as the recovery can take up to 10 months – and that doesn’t even include the psychological aspect of the injury.

That’s what makes new research done by the Centers for Disease Control and Prevention so shocking. Doctor Stephanie L. Silerberg said female soccer players are up to eight times more likely to suffer an ACL injury than male athletes in any other sport. FIFA also conducted research on the topic and said that female footballers are two to six times more likely to suffer this injury due to physiological differences.

Since the start of the WSL (Women’s Super League) in 2011 in England, there has been a steep increase in the number of ACL injuries. Most injuries come without any contact, as simple movements such as jumping, cutting, landing and even shooting can cause harm to the ligament. The ACL is a rubber band-like ligament that goes through the middle of the knee joint which attaches the femur to your shin bone.

Their is no specific reason for this increase, but there are factors. One of which is when starting high school, athletes are asked to train harder than they ever have and females bodies aren’t as equipped for that rigor based on developmental differences. Specifically, high school is around the time that both sexes hit puberty and, as boys testosterone levels increase, they naturally add muscle and get stronger. As girl’s estrogen levels increase, they add more fat than muscle while ligaments also weaken.

Another factor is that women have wider hips than men. Here is a great graphic from BBC Sport explaining the difference. 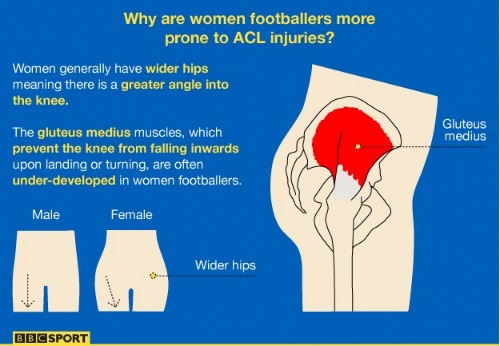 Dr. Letha Griddin of the Peachtree OrthoPaedic Clinin in Atlanta said that “ACL tears happen to girls that are in good physical shape and they happen because their movement patterns are not ideal.” She goes on to say that girls play more upright instead of playing with their hips and knees bent.

Despite these physical differences, there are exercises to prevent ACL injuries from happening in female athletes. Strengthening hamstrings, quadriceps and gluteal muscles regularly will go a long way, while simultaneously training neuromuscular tendencies. A program created to address all of these factors has been created and it is called the “PEP Program.” Results showed that two girls suffered ACL injuries in the PEP program while 32 girls suffered ACL injuries in groups where coaches declined to participate.

Here is the program below created by the Santa Monica Sports Medicine Foundation that was shot/edited by Marc Browne: