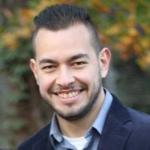 Juan Pimiento November 3, 2015
At 16 years of age, Norwegian midfielder Martin Ødegaard is regarded as the fastest rising star in soccer. Having already featured for his national team, Ødegaard currently awaits his opportunity at Real Madrid.

July 14, 2012 marked the first-team debut of a 13-year-old kid from Drammen, Norway. Since then, the world has been witness to the record-breaking career of one of soccer’s fastest rising stars: Martin Ødegaard.

Ødegaard was born on December 17, 1998 in Drammen, the son of Hans Erik Ødegaard, a former professional player himself. He began his youth career at Drammen Strong, created and coached by his father, until he joined the youth ranks of Tippeligaen (Norway’s top-flight league) outfit Strømsgodset in 2009, at age 13. 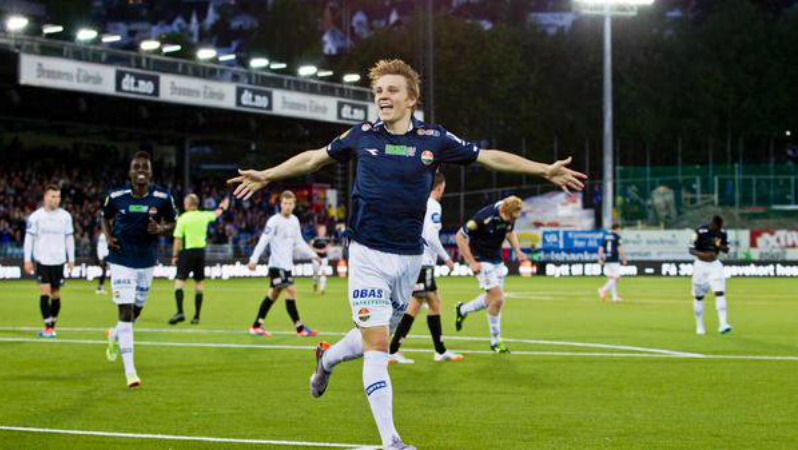 Ødegaard made his first-team debut in a mid-season friendly against Mjøndalen IF. At the start of the 2014 season, Strømsgodset included Ødegaard in the first-team squad, despite being forbidden from signing a professional contract due to his age. On April 13, Ødegaard became the youngest player ever to play in the Tippeligaen at 15 years and 118 days old. Nearly a month later, he also became the youngest goal scorer in league history after scoring the fourth goal in Strømsgodset’s victory against Sarpsborg. He also made his European debut for Strømsgodset on July 17, coming in as a substitute in a UEFA Europa League first qualifying round match against Steaua Bucharest.

During his stint with Strømsgodset, Ødegaard was already garnering the attention of Europe’s biggest clubs, receiving invitations for training sessions with clubs such as Manchester United, Manchester City, and Real Madrid. It was the Spanish capital team where Ødegaard would continue his young career. After only one season at Strømsgodset, Ødegaard joined Real Madrid during the winter transfer window for a reported 3 million euros. Ødegaard finished his Tippeligaen career with five goals and seven assists in 23 official appearances. 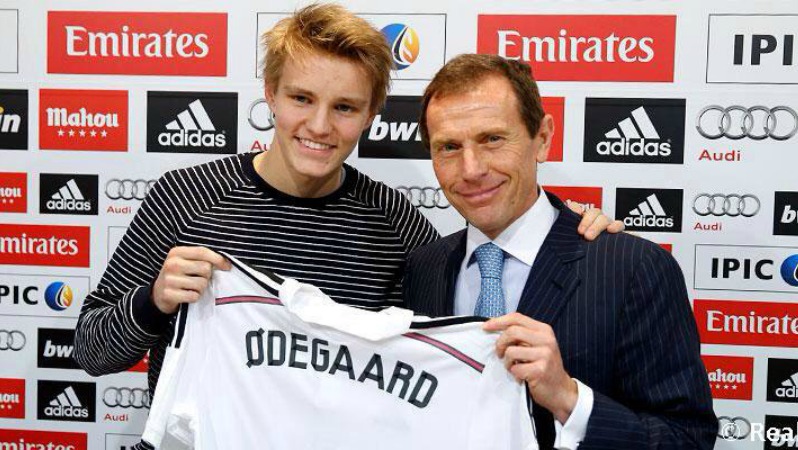 Ødegaard was assigned to primarily play for Zinedine Zidane’s Real Madrid Castilla, Real Madrid’s reserve team, though he splits training time between the reserves and the first team. He made his Castilla debut on February 8 against Ahtletic Bilbao’s reserves in Spain third-tier league Segunda Division B. Two week later, he scored his first goal in the seventh minute of Castilla’s 4-0 victory versus Barakaldo. It has been Ødegaard’s only score so far in his Real Madrid Castilla career.

Ødegaard’s Real Madrid stint has not gone without controversy. He received much criticism for not training with the Castilla squad in favor of playing with the first-team. After his goal-scoring performance versus Barakaldo, Ødegaard was demoted to the bench by manager Zinedine Zidane, and Spanish media came down with criticism on Ødegaard. Frederic Hermel of Spanish website AS.com wrote the Castilla players were complaining that Ødegaard “can’t be bothered with his Castilla teammates and is only interested in being alongside Cristiano Ronaldo.” Hermel added that “it’s clear that his integration at Madrid would be much easier and far smoother with player of his own age. That’s something which Ødegaard should think about.”

Ødegaard was called up to the first team for the first time for the April 29 matchup against Almeria, without appearing in the game. He would make his Real Madrid debut on May 23 in the 7-3 victory against Getafe, coming in as a substitute replacing Cristiano Ronaldo. 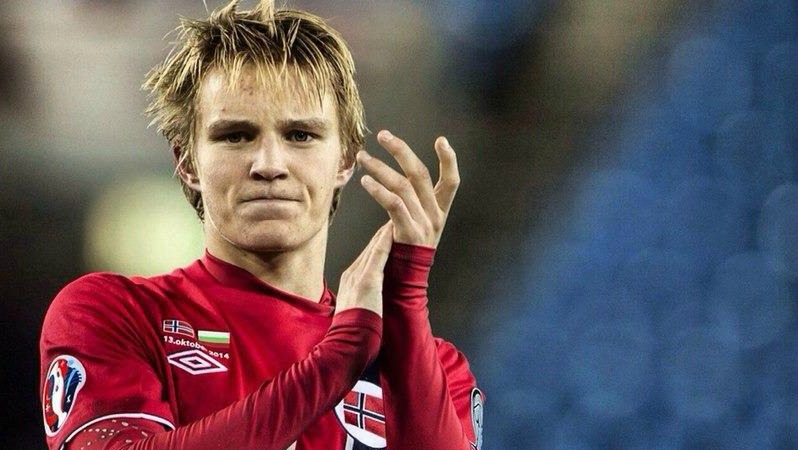 Despite his young age, Ødegaard has already featured internationally for Norway. While still playing for Strømsgodset, Ødegaard was called up for the first time by coach for the August 27, 2014 friendly against the United Arab Emirates Per-Matias Hogmo. He played the entire game, becoming the youngest player to play for the national senior team at age 15 and 253 days, a record that had stood since 1910. Nearly a month later, Ødegaard also became the youngest player to appear in an European Championship qualifier after coming as a substitute in Norway’s win against Bulgaria, and the youngest player to start an Euro qualifier in the 5-1 loss to Croatia in March. 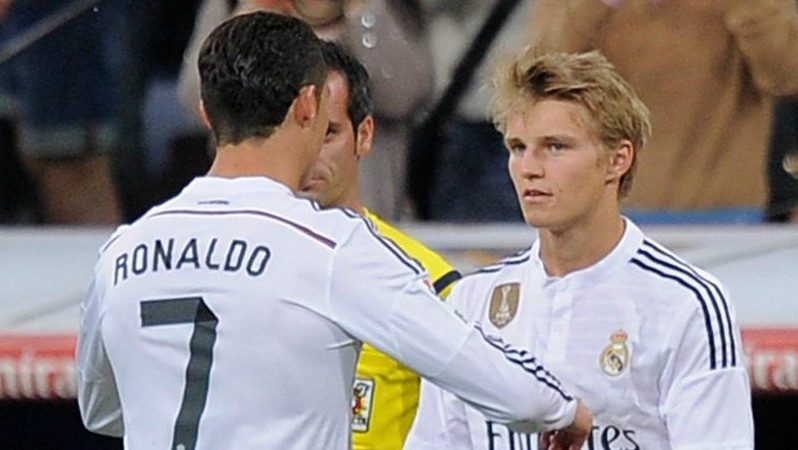 Ødegaard has been compared to the game’s best like Cristiano Ronaldo and Lionel Messi in terms of ability. NBC Sports’s scouting report reads:

“He’s a very good feel for the game. He has a good eye for slipping the right pass. He is left footed and is clever with how he moves and sees openings. He finds the right way to put passes through to people and he sees the game in a really good way. In terms of his vision and his understanding of the game, those are things which catch you right away. In that respect he’s a really talented young player with a really good idea of how to do things. As a young player he was capable of being a key player at Stromsgodset and he made key plays, set up goals and scored a few. But that’s still something that we will wait and see how that part of it develops. At the same time, clearly in terms of his understanding of the game and the way he moves with the ball, that part is pretty special.”

Positionally, Ødegaard has primarily played an attacking midfielder or as a second striker behind the center forward, having the freedom to operate off the right and left sides. With Norway, he operated as a right winger with the ability to cut inside with his left foot to create opportunities.