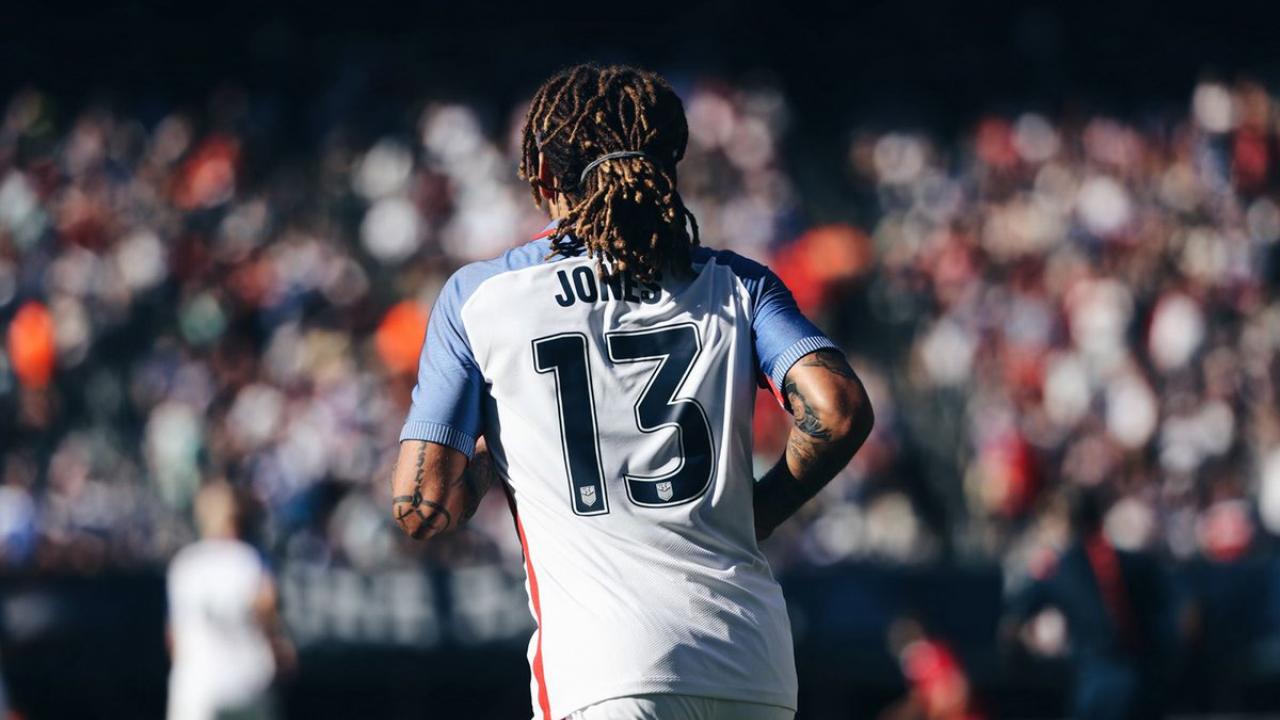 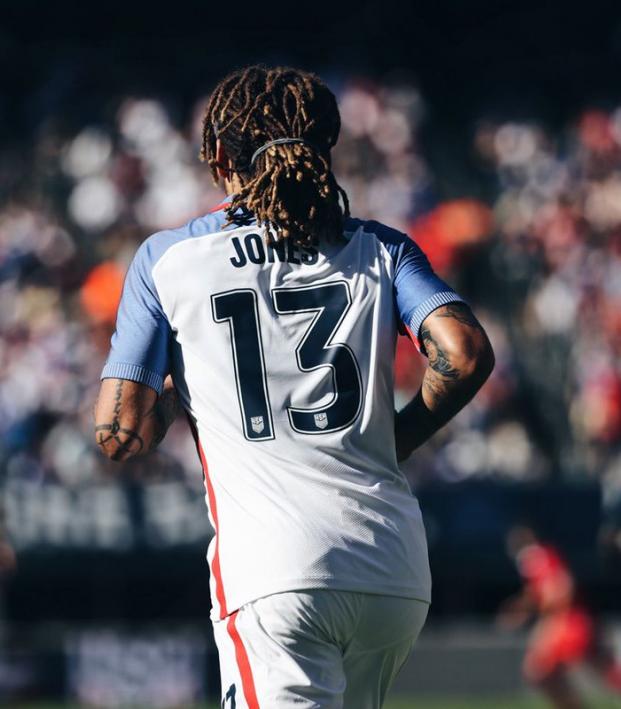 Jermaine Jones Challenged Us To Find Someone Better In His Position, So We Did

Connor Fleming April 6, 2017
Jermaine Jones deserves the respect he craves, but he’s no longer an untouchable on the USMNT.

Jermaine Jones came out firing in his latest interview with ESPN FC. His soundbites ranged from how he sees himself as Tom Brady and how he’s “always the best player on the field for this country” in big tournaments to the ever-growing criticism of the midfield combination of Michael Bradley and himself.

In a not so subtle shot at Bradley, Jones said, “The criticism is always on me. If we lose a game, they always try to find the next guy who can play for Jermaine. It’s never somebody else — it’s always me."

Agree or disagree with Jones, he’s certainly not shying away from the exact critiques that are now continuously leveled at him. This seems like a player who reads the papers and online material written about him — he’s well-versed in the Jermaine Jones debate.

Jones is right with regards to his awesome performance at the 2014 World Cup. He was immense for the United States, and his goal against Portugal earned him more than respect in the eyes of most USMNT supporters. At the Copa America Centenario, Jones played well against Costa Rica and Paraguay before being stupidly sent off against Ecuador in the quarterfinals.

Every time I hear the name Jermaine Jones... pic.twitter.com/EXLoOg9mY1

He’s cited having had the highest rating of any USMNT player at that tournament, but that’s largely because he was suspended for the semifinal against Argentina. Overall, Jones has had a great career with the national team, but nowhere near as good as, say, Landon Donovan, and how did that work out for him during Klinsmann’s selection process for the 2014 World Cup? My point being, you shouldn't have a guaranteed place in the USMNT squad based off past glories anymore.

Call it The Landon Donovan Rule.

The call to drop Bradley and retain Jones in the starting XI is never given serious thought because when Jones says there’s nobody better than him in his position, that same sentiment is exponentially truer for Bradley.

Bradley is the best holding midfielder this country has, and it’s a role he needs to play. Jones does not play the holding midfield role — anyone who thinks you can simply swap parts in the midfield has been playing too much FIFA. When he’s lined up “alongside” Bradley as the two midfielders shielding the defense, his role is to push further up the field and win the battle in the middle of the park as opposed to deeper in the U.S. third.

There was a time, a few years ago, when this worked better. They both boasted engines and dynamism that made the balance between the two players look coherent and provided a shifting and battling spine to the national team.

That time is over. I cannot express how diabolically shambles this pairing was in the 4-0 defeat to Costa Rica. The performance in Panama, while celebrated because we desperately needed to not lose, was no more inspiring. The idea that this was some cliche CONCACAF battle, our brave boys using their experience to defend a miracle point just baffles me. The battle? We were outshot, out-possessed and out-tackled.

Here's how the tried and true pairing of Bradley and Jones worked.

Bradley’s passing: 51/60 (85%) - Three key passes going forward, and three passes given away in our own half. You can see his range and his threat from deeper positions. He's really only guilty of one poor pass within our own half. Other than that, he's recycling the ball and making a few things happen further forward. 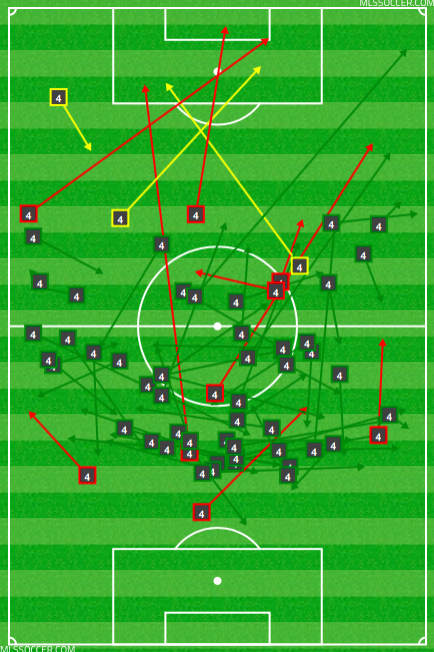 Jones’ passing: 16/22 (72%) - Zero key passes and three passes given away in our own half. Jones gave the ball away cheaply in dangerous positions, but, if he did do one thing right, it was to quickly give it to Christian Pulisic. He just didn't create — Bradley did more from a much deeper role. 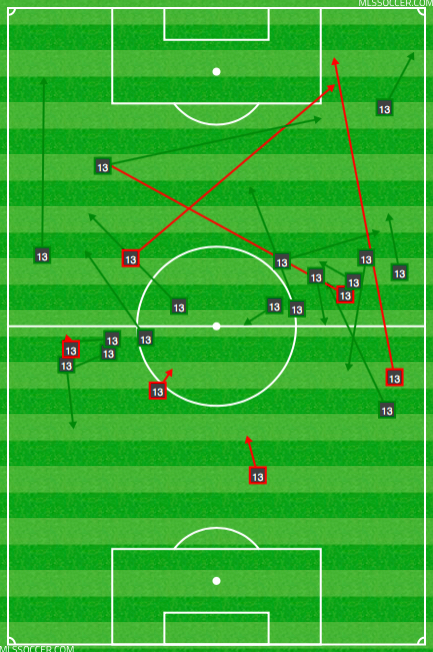 Bradley’s defensive contribution: One key tackle in the defensive third, one block just outside the area, two clearances in our own box and eight recoveries — all in our own half. That's a shift. 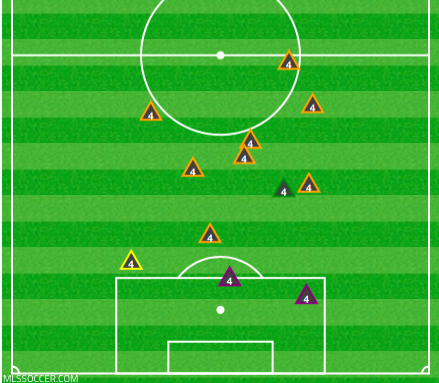 Jones’ defensive contribution: Two tackles and one recovery on the left-hand side of midfield, one clearance and two fouls committed. He was also absolutely destroyed by a cut from Alberto Quintero that allowed Quintero to lash a shot at Tim Howard, and he was one of the three or four defenders that couldn't deal with Panama's goal from a long throw. 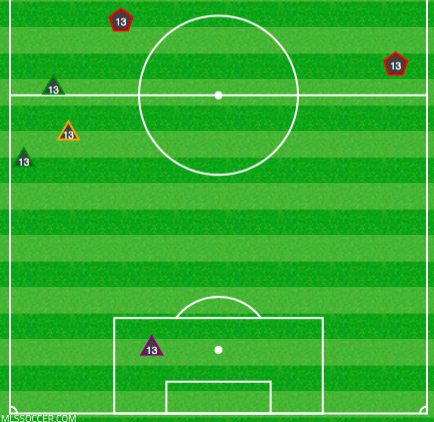 What it comes down to, and this is exactly what Jones realizes, is that it’s simply a matter of finding someone who does it better. We know what we’ll get with the Bradley/Jones axis. We’ll grind out some results, we’ll qualify for the World Cup and we’ll try to scrape through the group stage by the skin of our teeth while playing pragmatic and reactive football.

“Bring me the guy who is better in [my] position,” Jones said, “and show that week to week in the league, against me, against other teams, I respect it and I will say, ‘If he is better I will step away.’

Jones feels like he doesn’t enjoy the legendary status of Tim Howard and Clint Dempsey. I would argue that he does, it’s just that he isn't untouchable like those two. We haven’t had a ‘keeper that’s come close to matching Howard’s level (Bill Hamid now deserves an opportunity), and Dempsey is just in a league of his own.

Jones knows that he has the most experience of anyone in the pool, that he's excelled in the Bundesliga with FC Schalke and appeared in over 30 Champions League matches between 2007-14, never mind the fact that he’s spent the last three seasons bouncing around MLS and dealing with injuries. So who could possibly unseat the battle-hardened Jones in the center of midfield, offering both an attacking threat and steel in defense.

Who’s a better American box-to-box midfielder than him? Who won't shit themselves playing soccer in Costa Rica?

We saw exactly who in the 75th-minute of the Panama game with a substitution involving the ineffective Jones and 21-year-old FC Dallas talent Kellyn Acosta. Acosta didn’t do much in his 15-minute cameo, completing three of four passes but also attempting to dribble by a defender at the top of Panama’s box, a feat that Jones hasn’t tried in years.

So, to pursue Jones’ challenge of finding somebody better than him, let’s look at two recent matches from both players.

Real Salt Lake are a club that looks destined to be among the worst in MLS following a winless start to play after five matches. This is a match peak Jermaine Jones would utterly devastate.

Attacking statistics: 35/44 (79%) - RSL had Kyle Beckermen sent off in the 44th-minute of this match, so this game should belong to Jones. He’s clearly making more of a difference in and around the midfield, and he's trying to get the ball wide once play enters their third. RSL, down to 10 men, tried to play compactly.

But he's not finding any joy with his play near the RSL area, although that one key pass was a rare unlocking of the defense. He loses the ball on his only attempted dribble. He's given it away a couple times in his own half, but Jones does have a header that looks like a certain goal only for Nick Rimando to deny him. 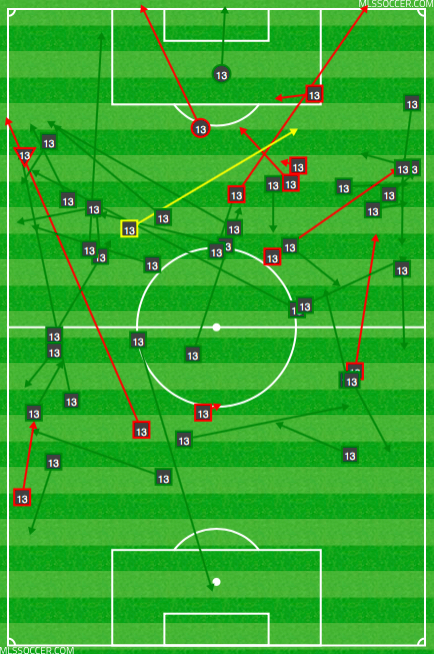 Defensive contribution: Two tackles on the left touchline, two interceptions near midfield and three recoveries. He’s drawn three fouls, including two in his own box, and he’s committed two of his own. Beckerman's sending off amounted to RSL lumping the ball forward as their means of attack, hence the strange look of this one. 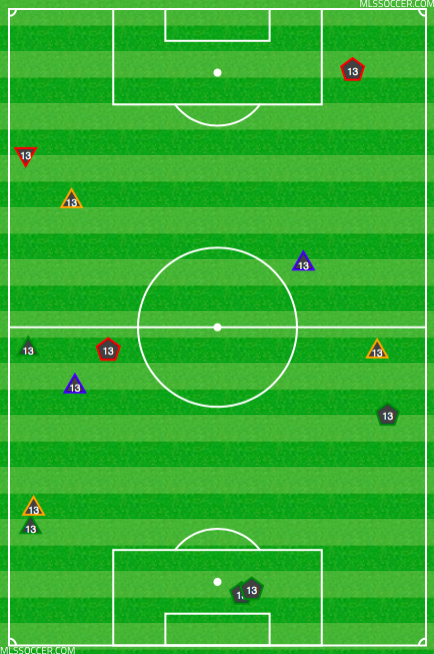 Attacking contribution: 31/43 (72%) - One beautiful goal from a free kick, two shots on target and one key pass. In a match where Pachuca held 60% of possession, you can tell that whenever Acosta got on the ball he wanted to go forward quickly. However, his passing in Pachuca’s attacking third (four completed passes and one key pass) shows his composure. Never lost the ball in a dangerous area. 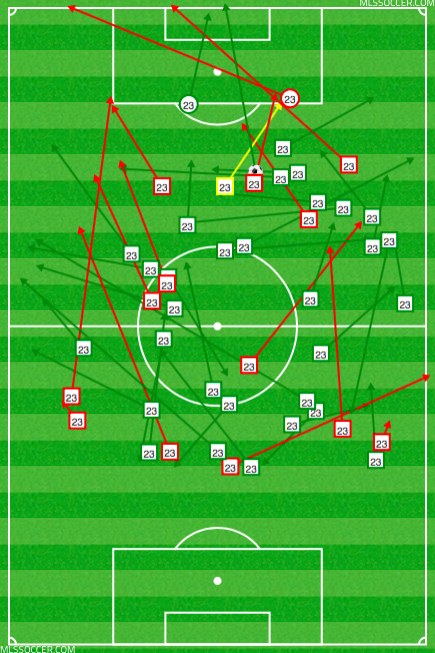 Defensive contribution: Two tackles and two interceptions in the FC Dallas half, two clearances and 10 recoveries all over the pitch. Two fouls committed and one foul suffered. He's simply all over the middle of the park. 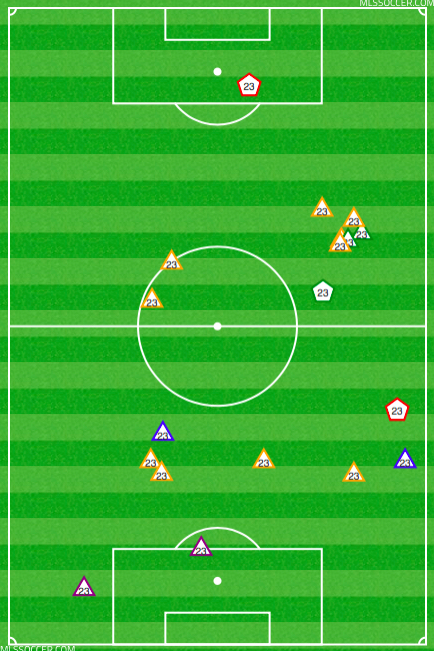 The next match we’ll look at for Jones is last weekend’s trip to Vancouver, a match that was a disaster for the Galaxy.

Attacking contribution: 35/50 (70%) - In a classic helter-skelter MLS match that Vancouver would win 4-2, Jones found some room to operate on top of the box. He was constantly showing for the ball, and his movement troubled Vancouver all match. He also put a great chance well wide. 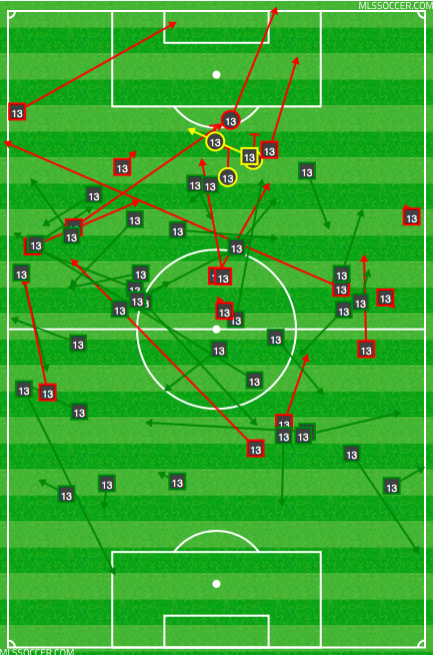 Defensive contribution: Why don't Bradley and Jones work well together? Here you go. These aren't just some subtleties that can be smoothed over in practice this week, this is evidence of how overpowering Vancouver's attack was. Jones had one tackle, missed a tackle in the LA half, blocked a shot and made only two recoveries. He made five clearances inside and around his own area, but that just speaks volumes about how much pressure LA were under.

There's no midfield battle. Juxtapose this with Jones' attacking contribution and you'll see that the midfield was just the space where attackers strode through. Is Jermaine Jones providing any more balance than Steven Gerrard did last year? 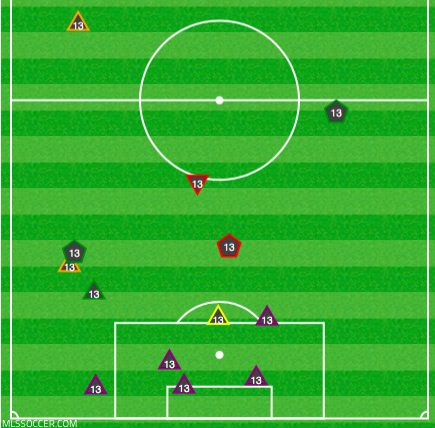 Attacking contribution: 27/35 (77%) - The only pass Acosta misplaced in the Dallas half was essentially a clearance. He had one shot, and he also put in a dangerous cross from a set piece that isn’t included here. Acosta also completed a successful dribble, turning his marker before making that key pass near the goal line that his teammate failed to tap in. He kept possession excellently in his own half and was extremely positive in Pachuca's. 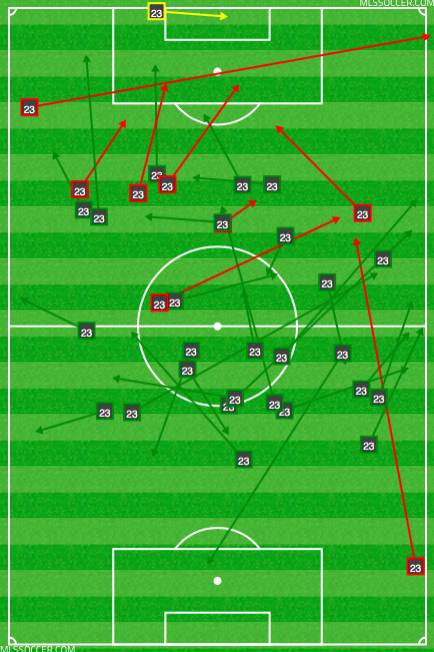 Defensive contribution: Acosta made eight recoveries, seven in his own half, one interception and one tackle just outside the Dallas area. He committed three fouls and suffered one, but this was actually a battle against a superior team, and he was fantastic. 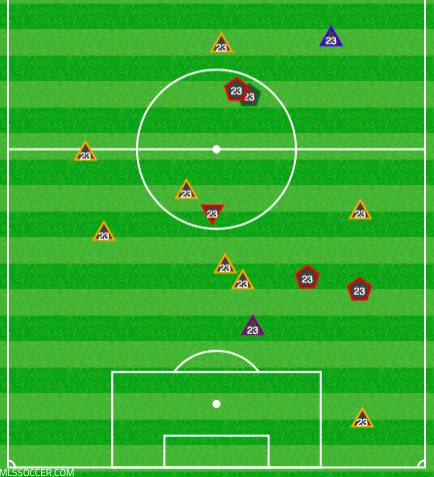 There you have it. Kellyn Acosta played brilliantly against Pachuca, a team that's much better than the Panama national team. But we stick with the tired cliche of needing grit and experience, which is even more dumbfounding when watching what Christian Pulisic is doing for us. On the other hand, Jermaine Jones had his struggles against 10 man Real Salt Lake and was completely overrun by the Vancouver Whitecaps — I'm sure he'll battle away against Brazil though.

There is someone better than Jones out there right now, and there's absolutely no reason not to believe he's ready. As a bonus, he's also good at taking corners, and a new corner taker is something we can all get behind.