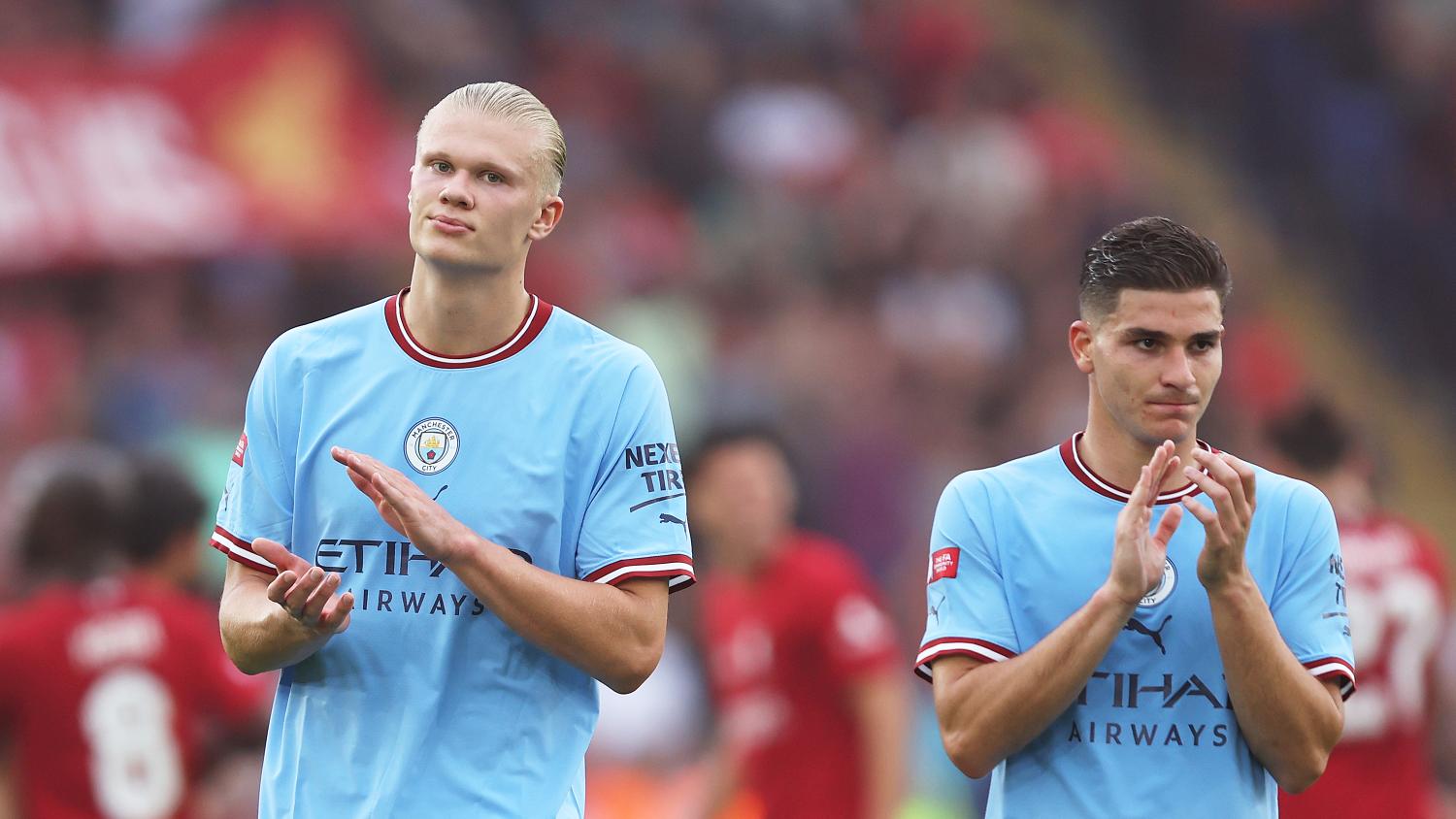 It was a rough day at the park for new the Manchester City signing.
Getty Images

One game into the 2022-23 season, a pair of South American newcomers have had a bigger impact for the Premier League’s top two teams than the summer’s biggest blockbuster signing. Liverpool’s Darwin Núñez and Manchester City’s Julián Álvarez were on the score sheet while City’s Erling Haaland struggled as Liverpool edged its rival 3-1 in the FA Community Shield on Saturday at King Power Stadium. A Haaland miss vs Liverpool was the biggest shock of the day.

Often seen as a glorified preseason friendly, Saturday’s Community Shield match was anything but, with both sides looking to assert their dominance over their primary Premier League competition. Mohamed Salah converted an 83rd-minute penalty that proved to be the match winner as the Reds claimed the Community Shield for the first time in 16 years.

SALAH CONVERTS THE PENALTY TO GIVE LIVERPOOL THE LEAD pic.twitter.com/k5jHEyk0QP

Goals from Salah and Trent Alexander-Arnold are nothing new, and much of the focus in the match was on newcomers on both clubs: Núñez, Álvarez and, of course, Haaland, arguably the most coveted striker to make a move this summer (thanks to Kylian Mbappé staying in Paris).

Haaland, who signed from Borussia Dortmund for $66 million, played the full 90 in his first meaningful match for Pep Guardiola’s side but failed to make an impact. The Norwegian striker managed three shots, two woefully off target, including blasting a sitter over the crossbar late in the match.

Though Haaland, 22, scored 12 minutes into his City debut against Bayern Munich in a friendly in the U.S., he was largely ineffective against Liverpool’s strong center back pairing of Virgil van Dijk and Joël Matip. He had two back-to-back opportunities in the first half but failed to convert. (Oddly, ESPN cut out Haaland’s first attempt seconds earlier in the video below, one that forced a strong save from Adrián.) Haaland put the ball in the back of the net after an audacious backheel from Phil Foden, but the ball had clearly gone out of bounds first and did not count.

Liverpool had Haaland’s number this time. Fortunately for City fans, 95 percent of Premier League clubs don’t have the same quality in defense as the Reds; Haaland will likely find his groove in Manchester sooner rather than later.

Instead of Haaland, it was City’s less heralded forward signing Álvarez — a 22-year-old Argentine center forward bought from River Plate for $25.3 million — who scored the Citizens’ lone goal, cleaning up a spilled save by keeper Adrián.

The goal was confirmed after VAR had a look. pic.twitter.com/TUUIoxr28j

Meanwhile, Liverpool’s big summer signing — the $82.5 million Uruguayan striker Núñez — made a strong first impression. The former Benfica man, 23, came on for Roberto Firmino in the 59th minute and nearly scored four minutes later but for a face save from Ederson. A header from Núñez caromed off the hand of Rúben Dias to earn the penalty Salah ripped past Ederson for the winner.

In about a third of the time on the pitch, Núñez had one more shot than Haaland, including one that found the back of the net in the 94th minute to seal the win.

Though City had its moments of superiority, Liverpool was the better side on the day and deserved the win. The penalty was a bit fortunate and Alexander-Arnold’s goal (below) took a slight deflection, but there can be no doubts who the Community Shield belongs to this year.

TRENT SCORES TO GIVE LIVERPOOL THE LEAD AGAINST MAN CITY pic.twitter.com/PlfvOxqJnQ