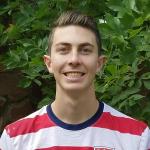 Jack Ramos November 21, 2016
Eden Hazard was just named Premier League Player of the Month, but he has his sights set much higher.

Eden Hazard keeps getting linked with bigger clubs, but the Chelsea attacker is happy where he's at right now.

In an interview with the Guardian, Hazard made his intentions clear: “If I ever leave, it’ll be after winning a championship.”

And this isn’t unrealistic. Through 11 games played, Chelsea has found themselves leading the Premier League. In the midst of a humiliating 3-0 loss to Arsenal early in the season, the Blues changed things up and dropped their 4-2-3-1 formation, initially just to stop the bleeding, and adopted the 3-4-3.

Surprisingly, the 3-4-3 formation became their salvation. The beauty of Antonio Conte’s 3-4-3 is that it when defending, it essentially turns into a five back formation. With Marcos Alonso running the left flank with Gary Cahill supporting him from the left center back formation, it frees up Hazard to play in a more attacking role.

Although he is listed as a winger, Hazard has spent even more time forward than Diego Costa since the adoption of the new system, and he has become nearly unstoppable. in 12 games this season, Hazard has scored seven times and been named man of the match six times.

As a result of his electric form, he won premier league player of the month for the first time in his career:

Congratulations Eden Hazard! The @ChelseaFC star is the @EASPORTSFIFA Player of the Month for October pic.twitter.com/vu3wCiccsx

Hazard is so confident in his new role, that after winning play of the month he added “see you next month for the same award”. If that isn’t confidence, I don’t know what is as Hazard didn’t even win the award during the 2014-2015 season when he became the premier league player of the year. And now he is confident enough to basically guarantee another award!

So has Hazard finally reached his potential? He is scoring like never before, and has played a more central role in Chelsea’s attack than ever before, but Conte thinks he has a ways to go still. “He has all the potential to do great things in his career. But, for now, it's important he's putting himself in the team. That's the best situation for us.” The fact that he thinks he still can improve is remarkable in and of itself, especially given how good he already is.

If Conte is right, we are in for a treat as we might be witnessing the arrival of a great.