USMNT and Newcastle United defender DeAndre Yedlin has penned a message of solidarity with George Floyd and the Black Lives Matter movement while revealing a gut wrenching text he received from his grandfather.

The 26-year-old has been in England since January of 2015 and with Newcastle for the past four seasons, and his grandfather said he’s glad that he’s “not living in the U.S. right now because he would fear for (his) life as a young black man.”

Yedlin has represented his country 62 times, including at the 2014 World Cup. Yedlin’s great-grandfather, Irving Schaffer, undertook 65 combat missions in a B-25 medium bomber during the Second World War. Yedlin’s grandfather was born in 1946, lived through the civil rights movement and raised Yedlin in Seattle.

Yedlin wrote the following message on Twitter on Tuesday: "A couple days after George Floyd's death, my grandfather texted me and told me he's glad that I am not living in the U.S. right now because he would fear for my life as a young black man. As days have passed, this text from my grandfather has not been able to leave my mind.

"In no way are we asking black lives to matter more than white lives, all we're asking is we are seen as equal, as more than 3/5 of a man, as humans.

"My heart goes out in solidarity to George Floyd, his family, and all of the countless number of victims that have had their lives taken at the hands of meaningless police brutality."

That message of solidarity was repeated at Newcastle’s training ground this morning.

Other clubs in the Premier League, including Liverpool and Chelsea, have also shown their support.

Before training at Cobham this morning, the Chelsea players and coaching staff formed the letter H, for humans, and knelt in a show of support for the #BlackLivesMatter movement. pic.twitter.com/yI6kAywa93

Many are also participating in Black Out Tuesday — “a one-day moratorium on business as usual” — including West Brom. 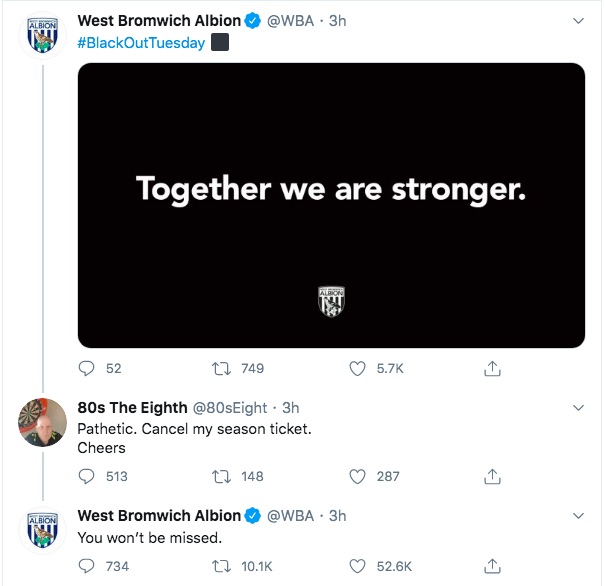