Pulisic Removes Chelsea From Instagram Bio — What Does It Mean?

Travis Yoesting May 23, 2022
Did Christian Pulisic hint he’ll be leaving Chelsea this summer or is everyone reading too much into his Instagram bio?

Christian Pulisic might be done with Chelsea, at least if we go by his Instagram bio. Pulisic transfer rumors are spiking after the American winger seemed to hint he’s on his way out after removing Chelsea from his bio and profile pic.

Pulisic is the most popular USMNT player in the world thanks to his big-money move to Chelsea in 2019. But the native of Hershey, Pennsylvania, hasn’t received the playing time he or his fans would prefer.

The result is a slew of Pulisic transfer rumors, including Barcelona in November and Juventus earlier this month.

With Chelsea’s season concluding on Sunday — a match in which Pulisic was an unused sub for the eighth time all season — sharp-eyed fans noticed a change in the American’s Instagram bio on Monday.

All references to Chelsea were removed, including in his bio and profile photo.

Obviously, this means Pulisic hates Chelsea and is never coming back! Or we’re reading too much into a 23-year-old’s social media page, as his Twitter profile still includes Chelsea. 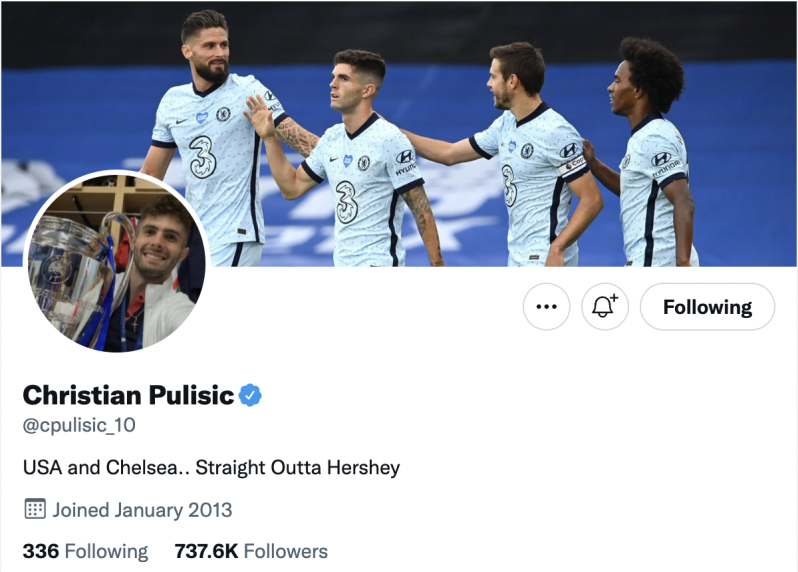 It should be noted Pulisic does not use his Twitter often. His last tweet was a sponsored post with Chipotle after the U.S. qualified for the 2022 World Cup in late March.

Qualified ✅ No better way to celebrate than with @ChipotleTweets . Try my go-to order in the Chipotle app/online #ChipotlePartner https://t.co/Vn1b4MhvuQ pic.twitter.com/D6JJbfB2fz

Pulisic’s TikTok bio is currently empty, which obviously means he is a man without a home.

The truth is likely somewhere in between Pulisic hating Chelsea and wanting to stay. It seems obvious Pulisic wants to be at a club that will give him more playing time. He was scheduled to meet with Chelsea on Monday — as most every player meets with their club after a season — to discuss his future.

None of this has stopped Pulisic transfer rumors from swirling around the internet.

This past season, Pulisic played in 22 of 38 Premier League fixtures, though he missed 10 matches through illness or injury. He scored six goals and added two assists in league play, plus another two goals in seven Champions League appearances. It’s a decent return, but one limited by his own limited opportunities.

Chelsea is a club whose transfer strategy is to buy as many ingredients as possible in hopes of finding a recipe that works while letting the extraneous elements go to waste in the pantry. More often than not, Pulisic has been deemed superfluous to Thomas Tuchel’s desires, adding a sprinkling of flavor here and there but never the main dish.

It doesn’t help that Tuchel’s narrative around Pulisic is always changing and rarely gives him the benefit of the doubt. For every strong run of form in which he regularly starts, Pulisic finds himself on the bench for a similarly long period. When Pulisic misses a chance in a meaningless match against Leicester, Tuchel criticizes him. When Mason Mount, an English midfielder often competing with Pulisic for playing time, misses, it’s bad luck and can happen to anyone. It seems clear Tuchel does not trust Pulisic.

in a final vs in a dead rubber game pic.twitter.com/TRvAH5V2K4

But that’s how things go when you’re an American in the Premier League, as Jesse Marsch has found out. Which might be why a move would be beneficial to Pulisic.

With the World Cup six months away, every player on a team that qualified is trying to obtain a transfer to a club that will allow them to reach top form ahead of the bizarre mid-season Qatar World Cup. Pulisic is the same. As one of Gregg Berhalter’s most potent offensive weapons, Americans will want Pulisic playing next fall, not riding the pine at Stamford Bridge.

Where Pulisic lands is anyone’s guess at this point. Barcelona doesn’t seem like the best option given how that club has plenty of wingers already. Juventus too is not lacking in attacking players, though Paulo Dybala’s impending departure could make way for Pulisic.

At Juventus, Pulisic could team up with fellow USMNT star Weston McKennie, who hasn’t had too much problem proving Americans can play in Italy. (Just don’t ask him about ranch dressing.)

Or maybe Pulisic could join Marsch’s rebuild at Leeds, though rumors suggest Brenden Aaronson could be making the move instead, and Lasso-forbid if one English team had three Americans on it — I think the entire country by spontaneously combust. Better yet: add oxygen to the combustion and let’s have Pulisic, Aaronson, Sergiño Dest, Zack Steffen, Tyler Adams and any other American in search of more playing time all join newly promoted Fulham to fully recreate the Fulhamerica team we all make every year on FIFA Career Mode.

Unfortunately, all that exists in Pulisic transfer stories right now are rumors. And internet sleuths thinking way too much about a change in Instagram bios.