After 13 Months In A Coma, Ajax’s Appie Nouri Is Awake And Communicating With Family

Hannah Lichtenstein August 21, 2018
The 21-year-old is showing signs of improvement after suffering cardiac arrhythmia on the field last summer.

The football world was stunned and heartbroken last summer when promising Dutch midfielder Abdelhak “Appie” Nouri collapsed on the pitch during a preseason game for Ajax against Werder Bremen. Despite efforts by team medical staff and doctors at Innsbruck hospital, the 20-year-old Nouri slipped into a coma, with Ajax later confirming that he had been left with “serious and permanent brain damage” after suffering a cardiac arrhythmia. 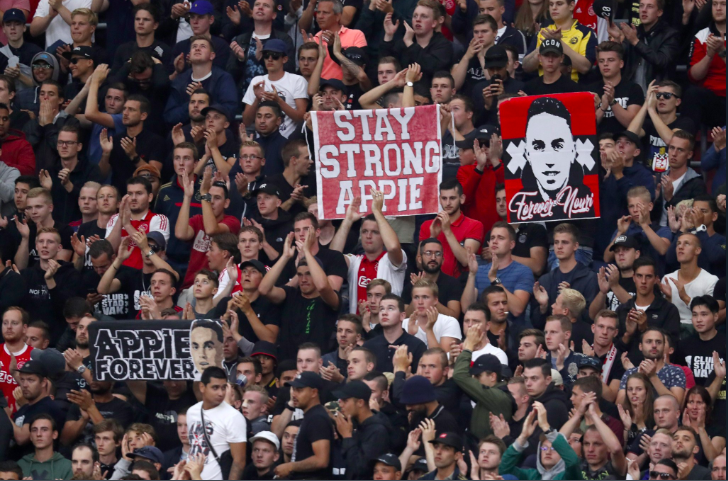 Fans have shown an outpour of support for Nouri. Photo: @TheFootyStands | Twitter

For over a year, Nouri’s family has been living its worst nightmare as the youngster has needed round-the-clock care and it has been uncertain how much, if ever, his condition would improve. In late June, one critical albeit painful chapter in this story came to a close, with Ajax finally admitting liability and accepting full responsibility for what happened to Nouri.

Ajax general manager Edwin Van Der Sar admitted that the player was not given adequate help when he collapsed on the field. Specialists revealed not enough had been done to measure his heart rate, circulation and to reanimate him. Earlier this year, it came to light that Ajax was aware of Nouri’s heart defect in 2014 after a routine screening by the Dutch football association. The club determined that the defect did not pose a serious risk to his health and did not inform the family.

Just recently, after several grim months, things seem to be looking up in a major way for Nouri and his family. His brother Abderrahim released an update Tuesday revealing positive news — his brother, who has slowly been able to function without assistance from a breathing device, is awake from his coma and has been communicating with members of his family. According to Abderrahim, Nouri woke up on August 5 and “recognized his family immediately.” Since then, he has been communicating using gestures of his head.

While no doubt there were will be tough times ahead, here is to hoping this is a sign of overall continued improvement of health and happiness for a footballer and his family struck by unimaginable tragedy.