A Tribute To Nat Phillips And Rhys Williams: The Center Back Pairing That Was Never Supposed To Be 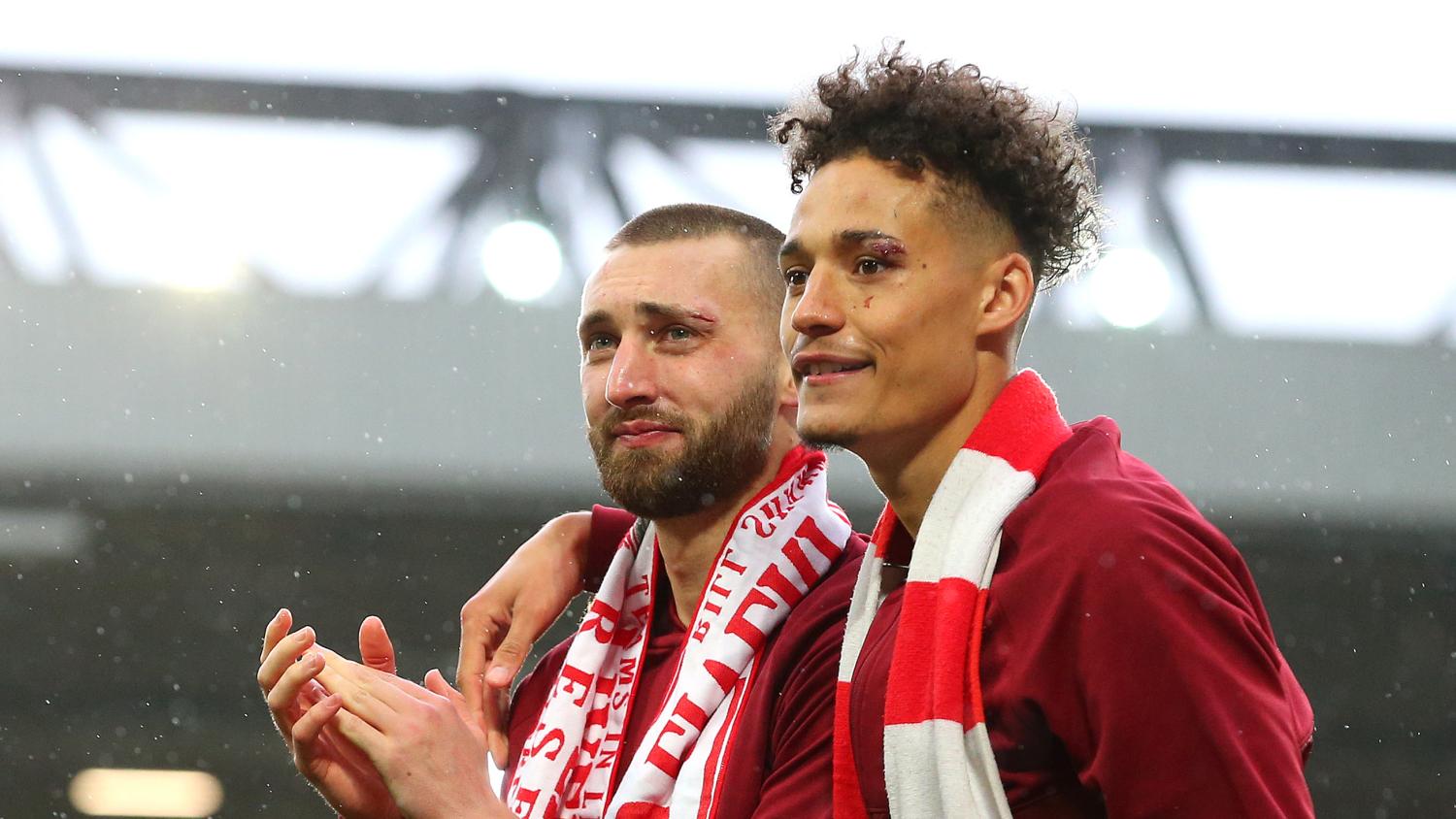 Liverpool was at a critical point in its season, and its two least-experienced players stepped up to the challenge.
Getty Images

After Virgil van Dijk and Joe Gomez both suffered season-ending injuries within the span of two weeks this past fall, Liverpool's title defense appeared to be over.

Joel Matip was left as the only healthy first-team center back, but soon the Cameroonian — who himself battled his share of injuries in the first half of the campaign — succumbed to a season-ending groin injury in January.

Yet after van Dijk and Gomez were lost for the season, Liverpool went undefeated for its next eight matches, including a 7-0 victory over Crystal Palace. This stretch did include four draws, but Fabinho settled in well at the back, allowing only four goals during this stretch despite a number of different center-back pairings.

But then the injuries started to pile up. Matip was lost for the season and Fabinho suffered a muscle injury, forcing Jürgen Klopp to field center midfielder Jordan Henderson as a deputy center back.

Henderson was paired with Fabinho, Ozan Kabak — a winter loan signing from Schalke — and former Bolton U-23 defender Nat Phillips, that is, before both Henderson and Fabinho missed extended time

Liverpool went through a stretch where it lost six of seven league matches, dropping from third to eighth, the club's lowest league position since 2017. Forget the top four, the Reds were struggling to even stay in the top half of the league.

Klopp needed a miracle to turn his season around, and it came in the form of a pair of players who had never made a senior appearance for the club in the EPL prior to this season.

Prior to this season, Rhys Williams' most significant senior experience came with Kidderminster Harries — the fifth-tier side where he made 26 appearances while on loan last year. As for Nat Phillips, he spent time out on loan with 2. Bundesliga side Stuttgart last season, and he made a single start for Liverpool in an FA Cup third-round victory over Everton.

Phillips' first league start came in a 2-1 win over West Ham on Halloween, but he would not become a regular until the end of January. Williams made his EPL debut in December in a 2-1 victory over then-first-place Tottenham, but did not start back-to-back games until May.

In total, Phillips made 15 EPL starts and Williams made seven, with the duo starting together six times over the course of the campaign. But when Phillips and Williams were on the pitch, they defended as well as any pair of center backs in the Premier League. 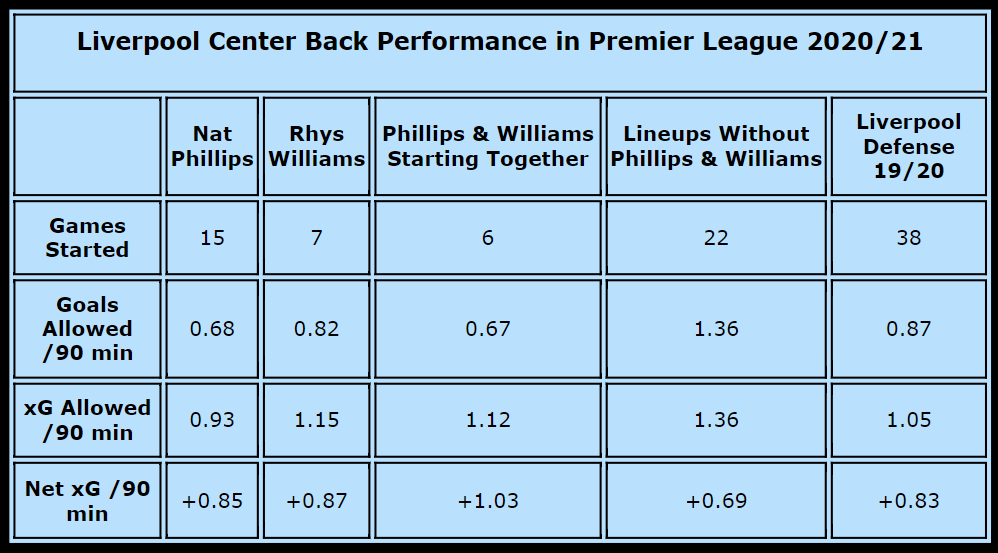 While there is a bit of a disparity between expected goals and the actual number of goals conceded by the duo of Phillips and Williams, they still had a better xG against than Liverpool's other center-back combos this season (which includes Virgil van Dijk, Joe Gomez and Joel Matip, among others).

Even if the actual number of goals conceded by Phillips and Williams was equal to their xG allowed, they would still be a top-five defense in the Premier League on a goals-conceded-per-game basis.

While Williams performed admirably, Phillips was the real stalwart of the two. The 24-year-old was a menace in the air, winning the fourth-most aerial duels per match in the league. His 7.29/10 WhoScored? rating in the EPL this season was second best on the team and 11th highest in the league. He also won three WhoScored? man of the match awards, the same number as Mohamed Salah.

Phillips was not just an elite performer among English defenders, he also ranked among the best in Europe. The former Bolton man ranked in the 99th percentile among European center backs when it came to both clearances and aerials won, and in the 90th percentile in interceptions.

His offensive contributions cannot be overlooked either. Phillips fell in the 87th percentile in progressive passes, and he was a major threat on set pieces — where he recorded a goal against Burnley and an assist against Manchester United, both near the end of the season.

Nat Phillips' quality showings even earned him the nickname "Bolton Baresi," a tribute to former Italy and AC Milan center back Franco Baresi — widely considered to be one of the best liberos of all time.

As for Rhys Williams, the 20-year-old was not quite the offensive threat that Phillips was (seventh percentile in progressive carries, no goals or assists), nor was he quite as cerebral as his center back counterpart (just 20th percentile in interceptions), but the Liverpool youth product was equally stout defensively.

Williams, who presided over three shutouts in his seven EPL starts, was in the 94th percentile or higher in clearances and aerials won.

Liverpool won the last seven games started by one of these two, with Phillips and Williams starting together in each of the last five games of the season.

Just two of Liverpool's nine defeats came with Phillips or Williams in the lineup, which made for a 11-2-3 record overall for the young center backs as they helped the club earn an unlikely third-place finish.

The Reds averaged 2.25 points per game with Phillips and/or Williams in the lineup, versus just 1.5 PPG with both of them on the bench.

Yet despite their impressive performances over the past couple of months, it is increasingly possible that Phillips and Williams will never play together again, or for Liverpool at all.

Liverpool is likely to loan out Rhys Williams this coming season, with interest coming in from lower-table Premier League sides and Championship clubs.

Of the two, Phillips has a slightly better chance of staying with the team for next season, but with Virgil van Dijk, Joe Gomez and Joel Matip all returning to full health come the fall — plus the addition of the highly-touted Ibrahima Konaté from RB Leipzig — Phillips would drop to fifth on the depth chart.

Like Williams, Phillips also has interest from numerous Premier League clubs, although a move for the 24-year-old would likely be permanent given his valuation is at its peak right now.

With his physical presence and aerial prowess, Burnley is a good fit for Phillips, especially considering that Ben Mee turns 32 in September and James Tarkowski is eyeing a move from Lancashire once his contract expires in 2022.

This would be a bittersweet ending for the center back duo, which won over the hearts of Liverpool fans through its courageous play at the back.

Perhaps nothing defines them better than the final game of the Premier League campaign, a match in which the young pair limited Crystal Palace to five shots to cap off the season with a 2-0 shutout victory.

Both Phillips and Williams suffered nearly identical cuts above their left eyes — which meant that they ended the season bleeding for their club.

Eight months ago, neither Nat Phillips nor Rhys Williams could have dreamed of the impact they would have on Liverpool this season, and even if they never put on the Liverpool jersey again, they will be remembered by Liverpool fans everywhere.