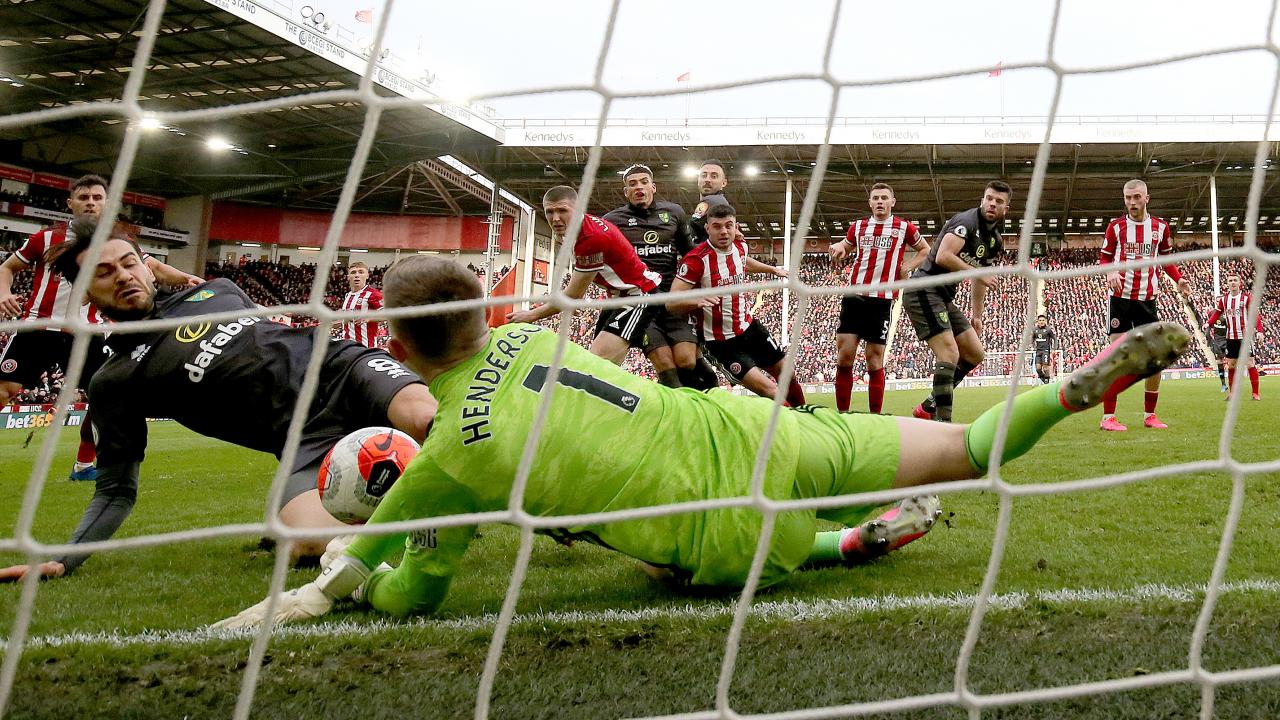 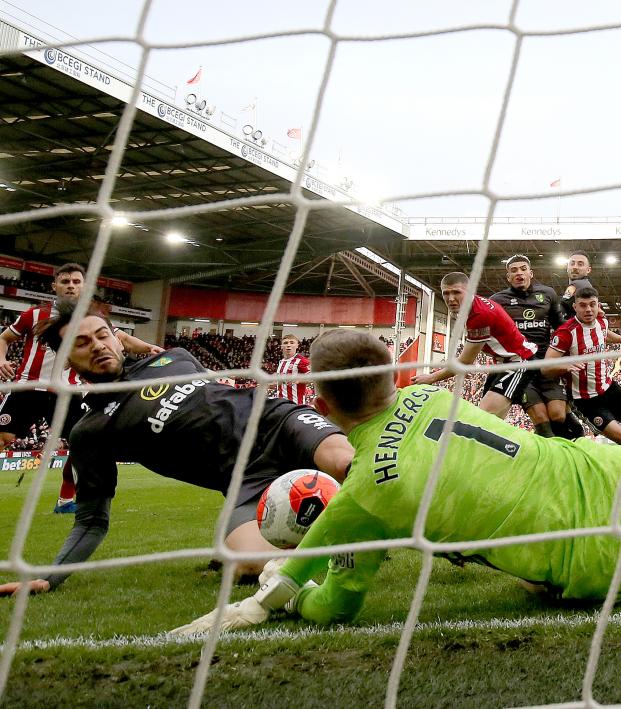 Let's Check In On The Premier League's Promoted Sides

The English Premier League is set to return June 17 and there's still a great deal to play for at both ends of the table.

The EPL's three promoted sides — Sheffield United, Norwich City and Aston Villa — find themselves at each end of the standings. The Blades are remarkably eyeing a spot in Europe, while Norwich and Villa are fighting for EPL survival.

These teams provide three unique models on how to avoid relegation. Each club took a distinct approach last summer to transfer spending and squad retainment as they hoped to achieve Premier League sucess.

With the season entering its final stretch, let's examine how these approaches paid off.

Sheffield United is on track to achieve what Wolverhampton Wanderers attained in 2018-19: Europa League qualification the season after earning promotion. The club currently sits in seventh place in the EPL, tied for sixth and just two points out of fifth.

Unlike Wolves though, who spent over $100 million each of the past two seasons, the Blades approached the transfer market with a more cautious mindset. During the summer 2019 transfer window they spent only $52 million.

Their biggest purchase was a $21 million fee for Scottish international Oli McBurnie from Swansea City. The striker has found the net just four times for United in the Premier League, but he's a tall, physical player who has provided solid performances for the Blades thus far and is third in the league in aerials won per game.

This consistency can be seen throughout the entire squad. The team has countless veteran starters with international experience who have been with the club since their lower league years. Center back John Egan and wing back Enda Stevens are both regulars for the Republic of Ireland, while midfielders Oliver Norwood and John Fleck are consistent representatives for Northern Ireland and Scotland, respectively.

In their last match before the coronavirus postponement, a 1-0 victory against Norwich, 10 of the 11 Sheffield United starters were holdovers from the previous campaign. The team uses this chemistry to make up for its lack of Premier League experience.

"We don’t disperse after training; it’s terribly tight-knit, we’re very close,” midfielder John Lundstram asserts, who has been with the club since 2017. "There’s not a lot of teams like that."

"We don't have the players that other teams have got," Wilder says. "But we have boys who want to track back, put a tackle in and stop a cross."

This work rate and desire is what Wilder believes sets his group apart from other Premier League sides.

On the pitch, the Blades play a 3-5-2 formation that relies heavily on their attacking width; 81 percent of their attacking play this season has come from wide areas, most in the league, and they average the second most crosses per game (per WhoScored).

This is reflected in the team's training sessions.

"We do a lot of work on the shape," Lundstram says. “A lot of drills focused on getting the ball wide, on overlapping, on creating overloads and getting the triangles right. We work a lot on the strikers’ movement and getting midfielders into the box."

During the January transfer window they splurged $23 million on highly rated central midfielder Sander Berge to acquire him from Belgian club Genk. The 21-year-old Norwegian international has Champions League experience and was sought after by top clubs such as Liverpool and Chelsea. This purchase strengthens the club's push for a European spot while also investing in a young talent for the future.

The question now is whether the Blades can maintain their form for the rest of the season, especially as the pressure to win increases.

Before the season started, Norwich City Sporting Director Stuart Webber guarded against excessive spending: "We're custodians of this place and we have to make sure we leave it in a better place than we found it. We've got to do it our way and trust that."

Webber pointed to the situation that played out at Fulham last year, where the club spent $128 million and still managed to get relegated.

"I don't know the ins and outs at Fulham this past year but it is a great reminder for clubs like ourselves that you can spend £100m and look what happens," Webber said.

The club spent under $10 million on signing players this season, but they signed 15 players to new contracts and extended the deal of manager Daniel Farke. Under Farke, the Canaries have played attack-minded football while building a young, talented squad. Their creativeness is spearheaded by wingers Todd Cantwell and Emiliano Buendia.

Cantwell's six goals and Buendia's seven assists are matched by striker Teemu Pukki's 11 goals. This trio showcased its abilities in a 3-2 victory over Manchester City on September 14, combining for two goals and three assists against last season's champion.

Despite his double-digit total, Pukki has often underwhelmed in front of goal this season, missing numerous chances he normally would have scored. Expectations were high for him following his unconscious goal-scoring form a year ago. In 2018-19, he netted 29 times to lead Norwich to the Championship title, while also boasting a phenomenal 10 goals in 10 games to help Finland qualify for its first-ever European Championship.

Despite their attacking talent, the Canaries have the fewest goals scored in the league, as Pukki and Cantwell are the only players with multiple goals in the Premier League. Experienced striker Josip Drmic was wisely brought in on a free transfer prior to the season, but he has found the net just once in 14 substitute appearances. Buendia, despite his promise, has also struggled in front of goal, failing to register on the score sheet in the league.

The lack of quality finishing is also matched by their defensive struggles. The back line trio of Max Aarons, Jamal Lewis and Ben Godfrey, all under the age of 23, show promise but have been out of their depth at times in the top division.

Norwich currently sits in last place with nine matches to go, six points adrift from safety. But even if they are relegated, they will be far better off than previously relegated clubs who spent recklessly (sorry Sunderland). The club has learned from previous Premier League spending blunders. It is now financially stable after minimizing summer spending and re-signing its gifted core of players.

With their talent, the Canaries are unlikely to face mid-table obscurity in the Championship, like Stoke City, Hull City or Huddersfield Town have experienced the past few seasons.

"We're still paying for some of the mistakes of times gone by and some of the expensive signings," Webber says. "This allows us to clear all of that out and realign ourselves as a club."

Aston Villa began the 2019-20 Premier League campaign with a message: It was going to spend its way to Premier League safety. The club doled out $175 million in transfer fees to purchase 16 players this season.

The squad is almost unrecognizable from the one that defeated Derby County in the Championship playoff final. Gone are lumbering Irish midfielder Glenn Whelan, Chelsea-loanee striker Tammy Abraham (who scored 26 league goals) and a host of other players.

Of Villa's regular starters, only midfielders Jack Grealish and Conor Hourihane have been with the club more than two seasons. Grealish is the star for Villa. The Englishman leads the team in nearly every offensive category and is third in the league with 2.7 key passes per game.

Center back Tyrone Mings was purchased from Bournemouth for $24 million to shore up the defense. The often-injured Englishman made just 14 Premier League appearances over four seasons with the Cherries. Mings has proved his worth this year, but is often faced with the daunting task of leading a back line composed entirely of new signings.

It is no surprise then that Villa has the worst defensive record in the league. Signing former Liverpool shot-stopper Pepe Reina on loan from AC Milan to replace the injured Tom Heaton was a smart piece of business but does not help a defense that allows nearly 20 shots per game, most in the league.

Unlike Sheffield United, which names a near-identical lineup every week, Villa manager Dean Smith has spent the entire season tinkering with his tactics. Signing 16 talented players seems sound, but with that comes the challenge of developing chemistry between an unfamiliar set of players.

Villa is one of the biggest clubs in England and faces enormous pressure from the fan base to avoid another relegation. The club had been in the Premier League for 29 straight years before a last-place finish in 2016. Since then, the club has spent considerable resources to regain promotion, and near misses in 2017 and 2018 only heightened anxieties.

While Sheffield United and Norwich can say they are pleased just to be in the Premier League, Aston Villa has much higher expectations.

When asked about a victory parade after last year's promotion success, chief executive Christian Purslow said: "We had an identical reaction, which was: 'We’re Aston Villa, we have parades when we win cups, when we win leagues, not when we get promoted effectively in third.'"

In 1981 the club won the English First Division and proceeded to win the European Cup the following year. Just a decade ago, the club was a consistent challenger for a Europa League spot under manager Martin O'Neill. Since then Villa has encountered financial difficulties, been sold twice and sacked more than its fair share of managers. The club spent a record amount this past summer because, according to Purslow, it has, "no interest in flirting with the catastrophe of relegation."

But with Villa in 19th place and just a quarter of the season left, the team will have to call upon its big signings to get results, because no more money can be spent to save Villa now.