Is Beyoncé more popular than Cristiano Ronaldo and Messi? 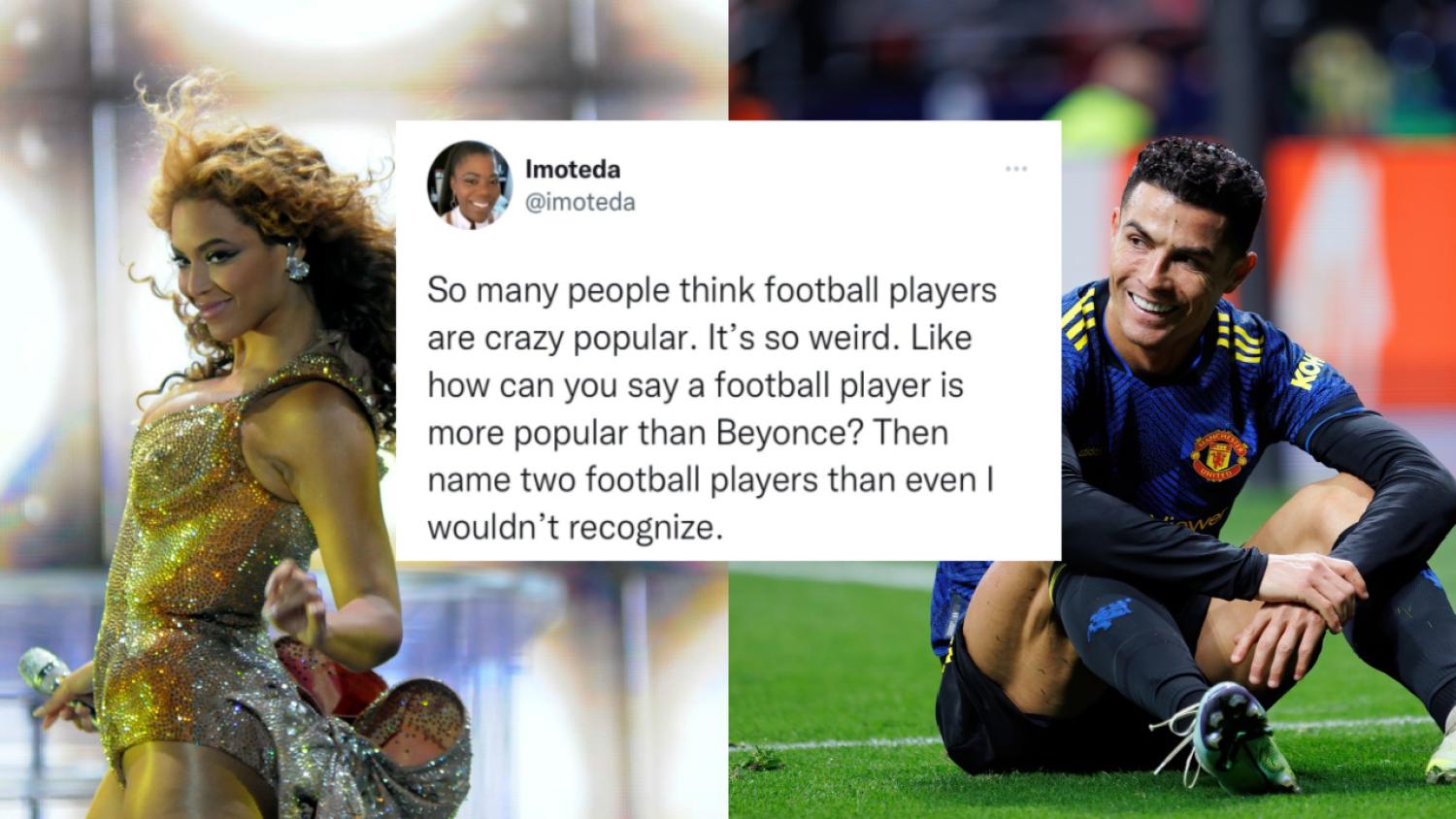 "Beyoncé" is trending on Twitter. Care to know why?

Over the weekend, a tweet claiming that no football player alive is more popular than Beyoncé riled up the whole of Twitter.

As of Monday, the original tweet had gained over 24,000 interactions and is now filled with replies and quote tweets from accounts defending the notion and with others denying it.

Micheal jackson sold 750 000 tickets in 4 hours , no football team , not even world cup can sell that much tickets in 4 hours .Over 50k people once pulled to his hotel just to look at him even with social media no single footballer can pull such crowd pic.twitter.com/jC9CQinDnI

Are you satisfied now? pic.twitter.com/ltUocOwjpz

Remove players like ronaldo,messi,neymar out,no player is going head to head with Justin Bieber in terms of global popularity apart from those three

The removal of two Coca-Cola bottles by Cristiano Ronaldo during the Euro 2020 press conference corresponded with a $4 billion decline in the company's market value.

Beyonce can never pull such !

It's a Twitter battle for the ages between the Beyhive and soccer fans.

Where does Beyoncé stand against the world’s most famous soccer players?

There’s no denying the level of stardom of Beyoncé — one of the most popular music artists in the U.S., the world and of all-time.

Beyoncé, as of Sept. 2022, has over 275 million followers on Instagram, 15.7 million Twitter followers, 44.4 million monthly listeners on Spotify, over 200 million records sold, has had five world tours, performed in the Super Bowl and is married to one of the most famous rappers in the world, Jay-Z.

She’s the boss in the music business.

Additionally, Beyoncé was the 25th most searched person on Google in 2022 with over 1.6 million searches, putting her ahead of celebrities like Tom Brady, Kanye West and Donald Trump.

However, is this enough to put her past the fame of any soccer player in the world? Not exactly.

Lionel Messi was the 10th most searched person on Google in 2022 with over 3.1 million searches — almost double that of Beyoncé's.

Historic: Lionel Messi reached the maximum number of searches on Google. 100%. Until the news of Covid passed.#LionelMessi
pic.twitter.com/EHUGo6c7ME

Messi, as of Sept. 2022, has over 362 million followers on Instagram, has won four Champions Leagues, seven Ballon d’Ors, has played for two of the most famous clubs in the world (Barcelona and PSG) and will play in his fifth World Cup in November.

After signing with PSG in 2021 as a 34-year-old, the club reported one million jerseys sold with Messi’s No. 30 printed on the back.

|BREAKING: The ranking of the footballers who sold the most shirts in 2021-22 was recently published. According to the data revealed by the Euromericas agency, Lionel Messi and PSG are largely at the top of sales! pic.twitter.com/IyDmBH6Ziu

Pretty impressive numbers, right? Well, what if I told you he still wasn’t the most followed player in the world?

Cristiano Ronaldo, as of Sept. 2022, has over 483 million followers on Instagram, 103.6 million Twitter followers, has won five UEFA Champions Leagues, five Ballon d’Ors, has played for two of the biggest soccer clubs in the world (Manchester United and Real Madrid) and will play his fifth World Cup in November.

Cristiano Ronaldo has been named as the most influential footballer on Instagram who will feature at this year's World Cup.

The 37-year-old has over 481 million IG followers. Each individual post is valued at an incredible £3.1million - the most by any player. pic.twitter.com/N5RnOD3V8W

Ronaldo is also known for being a fan favorite in the jersey market.

As a 24-year-old, when he signed for Real Madrid in 2009, Los Blancos sold a reported one million jerseys with Ronaldo’s No. 9 printed on the back.

ANOTHER RECORD FOR CRISTIANO RONALDO

Are these fair comparisons?

In reality, there’s really no point of comparison between professional athletes and music stars.

Artists like Beyoncé could sell out stadiums all over the world because she performs and makes music, whereas players like Ronaldo and Messi (by themselves and in normal instances) wouldn’t be able to.

Soccer players like Messi and Ronaldo can sell millions of $100 jerseys because they use them in games every week, whereas if Beyoncé released a line of merchandise, her numbers wouldn’t come close to that of these players.

It’s difficult to compare the fame of the two.

Now, in retrospect and in conclusion to the tweet, although Beyoncé is clearly more famous than most professional athletes and soccer players, there’s definitely some players — including and aside from Ronaldo and Messi — that could give the American singer’s fame a run for her money.

The funniest memes that came out of the Beyoncé soccer tweet

As always and with our usual personal preference, we end on a lighter note with some of funniest memes and replies that came out of the conversation on Twitter.

Maguire is popular than Beyonce https://t.co/4WCfZVTX9i

Beyoncé can never have this juice, never pic.twitter.com/Uy6CYlo9Vy