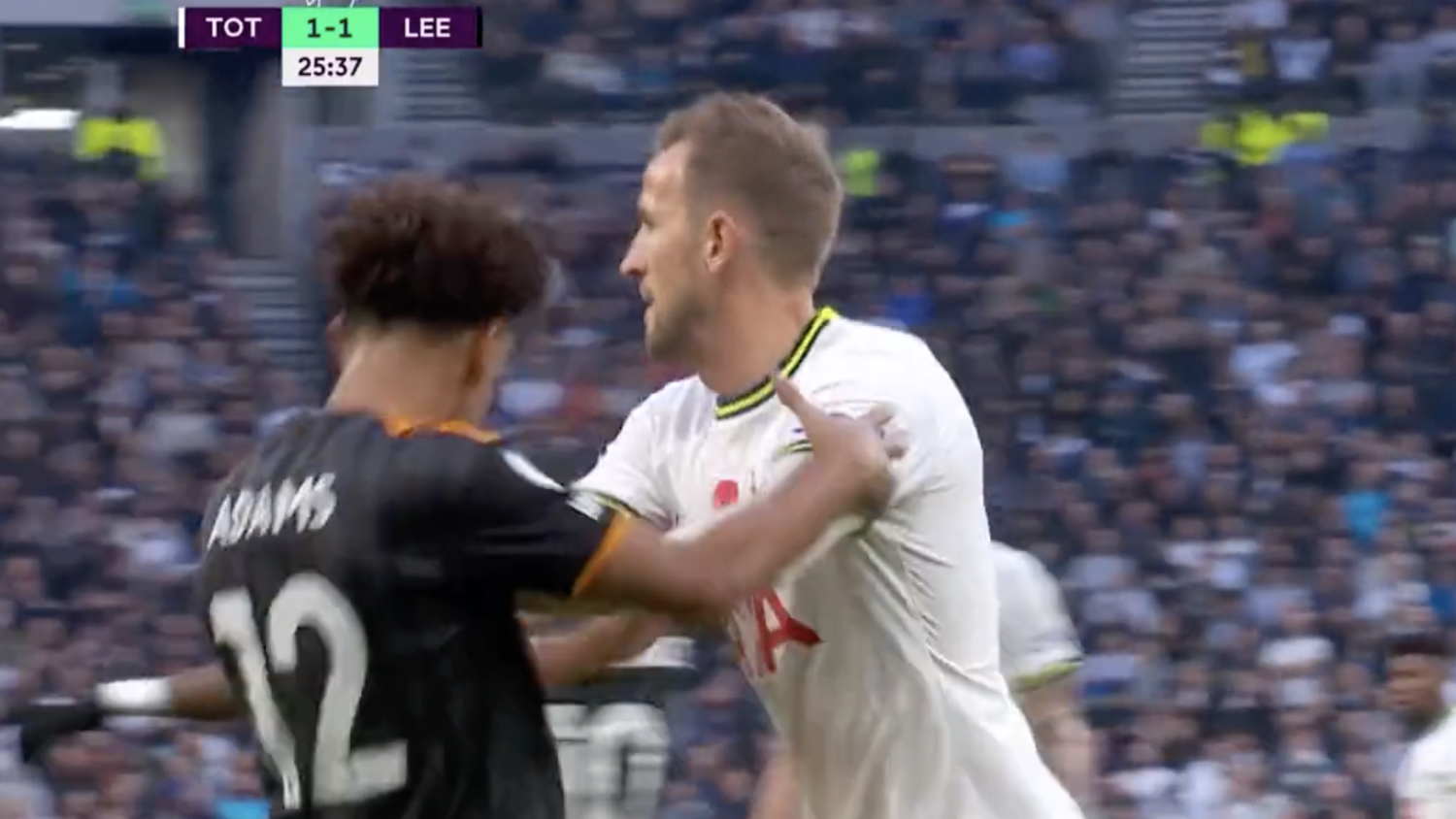 Leeds United had a horrific collapse vs. Spurs on Saturday with a 4-3 loss at Tottenham Hotspur Stadium after leading 3-2 as late as the 80th minute. For Tottenham’s first goal U.S. fans discovered what would happen if Tyler Adams marked Harry Kane during a corner kick.

With Leeds leading 1-0, Tottenham scored a controversial equalizer through Kane in the 25th minute. Clément Lenglet appeared to foul Leeds goalkeeper Illan Meslier when the cross was delivered.

What American fans noticed was England striker Kane absolutely bullying Adams in the lead up to the goal. Not sure who decided that 5-foot-9 Adams should mark 6-foot-2 Kane on set pieces, but it ended predictably.

Harry Kane with the equalizer!

Was this a foul on Illan Meslier before Harry Kane scored?

How about we don’t have Tyler Adams mark Harry Kane on corners in a couple of Fridays?!

When the USMNT plays England on Black Friday, Nov. 25, let’s be sure that Walker Zimmerman is guarding Kane and not Adams.

Adams’ game was much like how the day went for Leeds. A roller coaster. He had plenty of great interceptions and times he won possession back including helping Leeds’ third goal. His lowest moment came in the 87th minute when he halted Yves Bissouma’s counterattack which resulted in a second yellow card.

Tyler Adams receives a second yellow card and he has been sent off late in the match.

This was the first red card in Adams’ career.

The rest of the game was textbook Leeds. A heart-pounding, high scoring affair that you couldn’t take your eyes off of.

It may be the fall, but Summerville is HEATING UP!

The lead lasted for 15 minutes until the controversial corner kick equalizer for Spurs.

Aaronson had one of his better performances for Leeds on Saturday. Near the end of halftime, he cleverly nutmegged Eric Dier near the end line which would end up with Dier having to concede a corner kick.

Leeds equalized on the ensuing corner kick with Rodrigo scoring his first of two goals on the day.

Rodrigoal is back on the menu! Leeds are back on top.

American manager Jesse Marsch went into the half with a 2-1 lead, but not even he could have foreseen how the second half would go.

In the 51st minute a chaotic sequence in Leeds’ box eventually fell to the foot of Ben Davies who smashed in a shot from 20 yards to level things at 2-2.

The game would calm down for the next 25 minutes as both sides saw large spells of possession. All hell would break loose for the final 15 minutes of the game.

Rodrigo scored his second of the game in the 76th minute to give Leeds a 3-2 lead and what looked like a decisive goal.

It's a brace for Rodrigo and Leeds lead once again!

Remember, this is Leeds we’re talking about so nothing is decisive until the final whistle blows. Marsch’s jubilation would last all of five minutes before Tottenham’s Rodrigo Bentancur crushed the Leeds celebration.

Bentancur is experiencing his highest scoring season and he denied Leeds from gaining any points with two goals in two minutes. His first goal came in the 81st minute and he would get the winner moments later.

So many goals.. But this time it's Bentancur with his second goal in 2:16 to give Tottenham the lead!

Sheesh. That Leeds defense is rough. Marsch's side has conceded 26 goals in 14 games. Only Nottingham Forest and Bournemouth have been scored on more.

At one moment it looked like Leeds were going to get their first-ever away victory vs. Tottenham in the Premier League, the next they were losing 4-3 and down a man.