In 2019, Concacaf held the largest-ever Gold Cup, with 16 teams creating an event that was actually pretty exciting. For the 2021 Gold Cup format, Concacaf is doubling down on the 16-team field but adding some weird new spice to the tournament — and for some reason an odd choice for its first guest participant in over a decade.

The 2021 Gold Cup format was announced on Wednesday and includes a few new features, namely a play-in round, a slightly enhanced knockout phase and everyone’s favorite confederation champion as a guest team — no, not Brazil, or Portugal, or Algeria, or New Zealand. We’re talking Qatar!

“The Concacaf Gold Cup is a prestigious tournament and we’re thrilled Qatar has been invited to compete in the 2021 and 2023 editions,” said Qatar Football Association president H.E. Sheikh Hamad bin Khalifa bin Ahmed Al Thani, not that anyone asked. “Qatar’s participation in the tournament next year takes place just 17 months before the FIFA World Cup Qatar 2022 kicks off so it will be a great opportunity to help further prepare the national team ahead of their opening World Cup match on 21 November 2022. Winning the 2019 AFC Asian Cup marked an important milestone in our development plan, and so we head into the Gold Cup confident that we can compete with Concacaf’s best teams. We look forward to the competition.”

“We also welcome a new guest in the Qatar national team,” said Concacaf president and FIFA vice president Victor Montagliani. “As the AFC Asian Champions, they will provide stern opposition for Concacaf teams. The partnership we have entered into with the QFA and SC will be game-changing for the development of football at all levels in our region.”

The 2021 Gold Cup format is mostly the same as 2019, with 16 teams divided into four groups of four and the top eight advancing to the single-elimination knockout rounds. Those structures mostly remain, although there will be more cross-bracket variation to the knockout rounds. This means a Mexico-U.S. final, always the goal of Concacaf’s Gold Cups, is even less likely, but considering the last four Gold Cups have failed to produce the desired Mexico-U.S. final despite the bracket trying to create one, that’s probably fine.

What will really make the 2021 Gold Cup different is the play-in rounds, where 12 teams compete over five days to fill out the final three teams in the group stage.

The 13 teams to qualify immediately for the group stage are based on the inaugural Concacaf Nations League. The countries that finished first in League A (U.S., Mexico, Honduras, Costa Rica), first in League B (Grenada, El Salvador, Jamaica, Suriname) and second in League A (Canada, Panama, Martinique Curaçao) all go straight to the 2021 Gold Cup group stage, alongside Qatar.

The 12 teams fighting for the final three spots are those who finished third in League A (Cuba, Bermuda, Trinidad and Tobago, Haiti), second-place teams from League B (French Guiana, Montserrat, Guyana, Saint Vincent and the Grenadines) and the first-place teams from League C (Barbados, Bahamas, Guatemala, Guadeloupe). Those teams will play one-off, single-elimination matches until three remain to be slotted into the 2021 Gold Cup group stage. 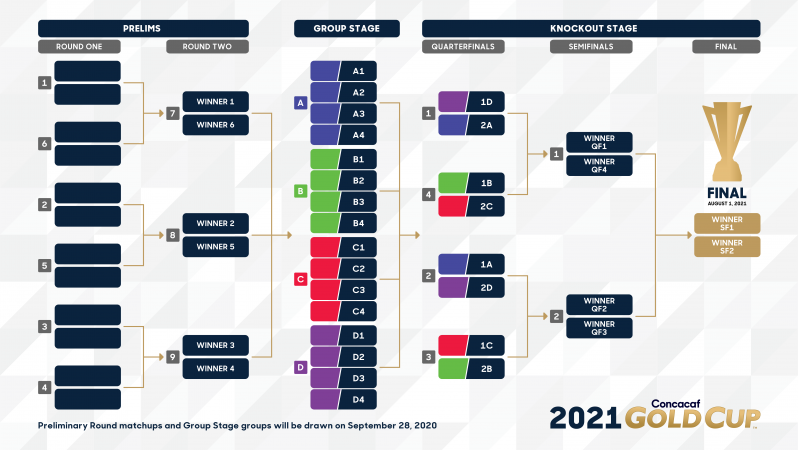 The draw for the 2021 Gold Cup, which for some reason Concacaf is bragging about being the first-ever draw for a Gold Cup, will be held on Sept. 28. This will determine both the preliminary round matches and the makeup of the four groups in the group stage.

Allowing more Concacaf teams a chance to participate is great, but if the federation is going to invite teams, why not invite teams that will actually get fans excited? (Oh, right, money.) I fondly remember going to one of the more bizarre sporting events of my life in 2005, when there was a Gold Cup quarterfinal doubleheader featuring South Africa against Panama in the first match and Mexico losing to Colombia in the second. (Somewhat surprisingly, of those four teams it was Panama that advanced the furthest, losing to the U.S. on PKs in the final.) Concacaf stopped inviting teams from outside the federation after that 2005 tournament and bragged about the depth of the federation following the 16-team 2019 Gold Cup, so we have to assume the only reason it invited Qatar was financial.

Anyway, here are the key dates for the 2021 Gold Cup format, so you can put them in your calendar and then forget them until a week before.