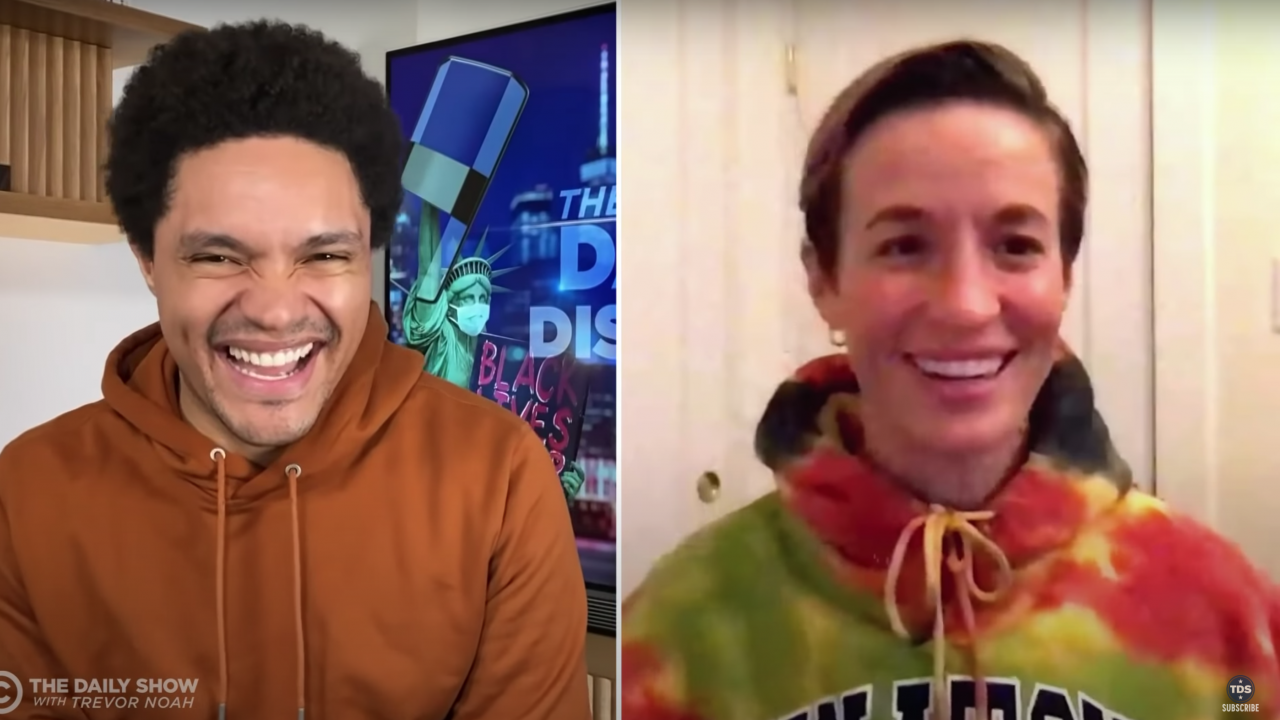 Few have been as outspoken against the 45th president of the United States as Megan Rapinoe. Asked if she’d go to the White House if the USWNT won the 2019 World Cup, she responded: “I’m not going to the fucking White House.”

On Thursday, the 2019 Ballon d’Or winner spoke about having a dad who actually supported the man who lost the 2020 presidential election.

Appearing on The Daily Social Distancing Show With Trevor Noah to promote her new book as part of a media blitz this week, Rapinoe first exchanged compliments with the host on their shared love for hoodies (who doesn’t love hoodies?). Noah also congratulated Rapinoe on her recent engagement to WNBA legend Sue Bird.

Rapinoe joked that when she started dating Bird, Rapinoe’s mom said: “I Googled Sue and you’re really not impressive anymore.”

After dispelling some myths about equal pay and telling a story about inspiring her aunt, Rapinoe answered a question about her dad being a supporter of the outgoing president and how to deal with family members who support politicians who actively fight against human rights for anyone but straight white men.

“I just try to keep talking,” Rapinoe said. “I still obviously have this relationship, I love him, and while it’s painful, of course, and it was painful to know he would’ve voted for someone like that and supported for him for a lot of years — I don’t think he voted for him this year, which I’m thankful for.

“But we can’t just not talk to each other. It’s obviously a tough time for everyone right now, knowing that 71 million people voted for someone whose just spewed hatred and chaos and disaster and we have approaching 250,000 people dead from Covid and all these things to know that someone supports that. Clearly there’s much more to it that I think we need to dig into and have more conversation with just as family, as friends, as a nation, as everybody.”

Like Rapinoe said, it’s important to keep talking to these people who feel their best hope in a politician is to support a racist, sexist, xenophobic, homophobic, Islamophobic, anti-Semitic, transphobic, misogynistic white man. Hopefully open and honest conversations can overcome years of disinformation spread by hate groups online.

(Watch the interview of Rapinoe on the Daily Show in the video at the top of the page.)