David Moore December 2, 2020
Pulisic saw 66 minutes of action in his first start since October, but Giroud stole the show.

Chelsea flexed its superiority with a comfortable 4-0 victory against Sevilla on Wednesday in the Champions League to claim Group E’s top spot. Four top-class Olivier Giroud goals vs Sevilla got the job done for the Blues.

The London club came into the fixture on a 14-game unbeaten streak in all competitions and immediately put the pressure on Sevilla after the first whistle. In the eighth minute Kai Havertz found open space to dribble before laying the ball off to Giroud, who finished the chance beautifully.

Chelsea are off to a great start thanks to Oliver Giroud pic.twitter.com/8c1zpvGyBH

The Frenchman scored the game-winner against Rennes last week and showed no signs of slowing. This sublime left-footed finish in the first half was only the start for Giroud.

Chelsea went into the half with a one-goal lead, and Giroud would save his best for the second half. Less than 10 minutes into the second half he bagged his second goal with one of the most delicate chip shots you will ever see.

The Frenchman’s first goal was on his left foot and the second on his right. It was only right that Giroud ensured he would receive the match ball by scoring with his head in the 74th minute. A perfect hat-trick.

What a performance from Olivier Giroud pic.twitter.com/HtOHrCGEbQ

The last Chelsea player to score a perfect hat trick was Christian Pulisic during his superb performance against Burnley in October 2019. Giroud is also the second-ever Chelsea player to record a Champions League hat trick. Didier Drogba was the first when he scored three against Levski Sofia in 2006.

Giroud would add the icing on the cake in the 83rd minute after being dragged down in the penalty area and converting the ensuing penalty.

Giroud became the first Chelsea player in a decade to score four goals in a single match. The last player to do so? His manager Frank Lampard in 2010 against Aston Villa.

4 - Olivier Giroud is the first Chelsea player to score four goals in a game since Frank Lampard in March 2010 vs Aston Villa, while he's the first to net four for Chelsea in a European Cup/Champions League game. Incredible. pic.twitter.com/p3k9sdCz9k

A truly incredible performance from the man who many thought was written off and expected to leave in the upcoming winter transfer window.

How Did Pulisic Do?

Pulisic started his first game since October after dealing with a hamstring injury. The American showed some signs of promise and had USMNT fans squealing when he left Jesus Navas in the dust with some fancy footwork.

Pulisic had several opportunities and four shots in the game but failed to convert any of his chances. Fans and critics agreed that Pulisic looked rusty and even a little greedy at times. At one point in time “Pulisic greedy” was trending on Twitter. 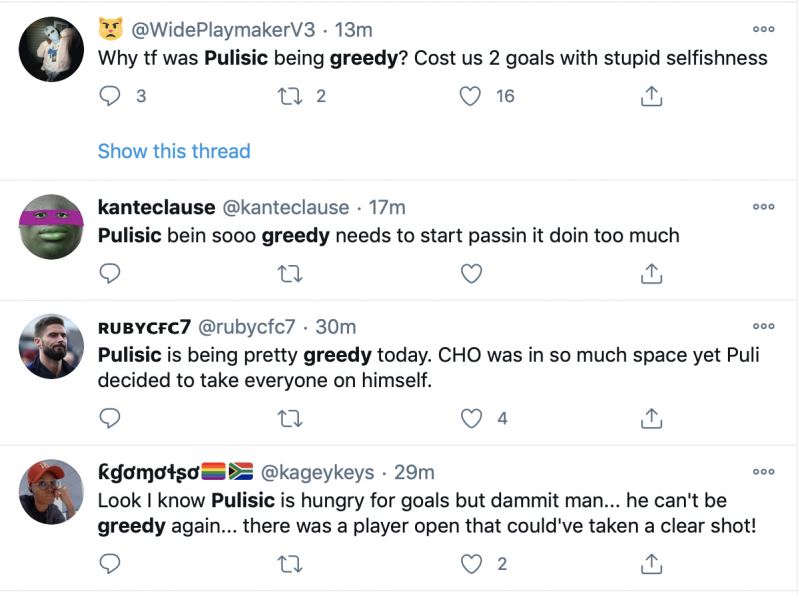 The good news for the American is that he isn’t the only player on Chelsea able to create and score opportunities. He will have more chances in the future and fans should be thankful he's healthy again.