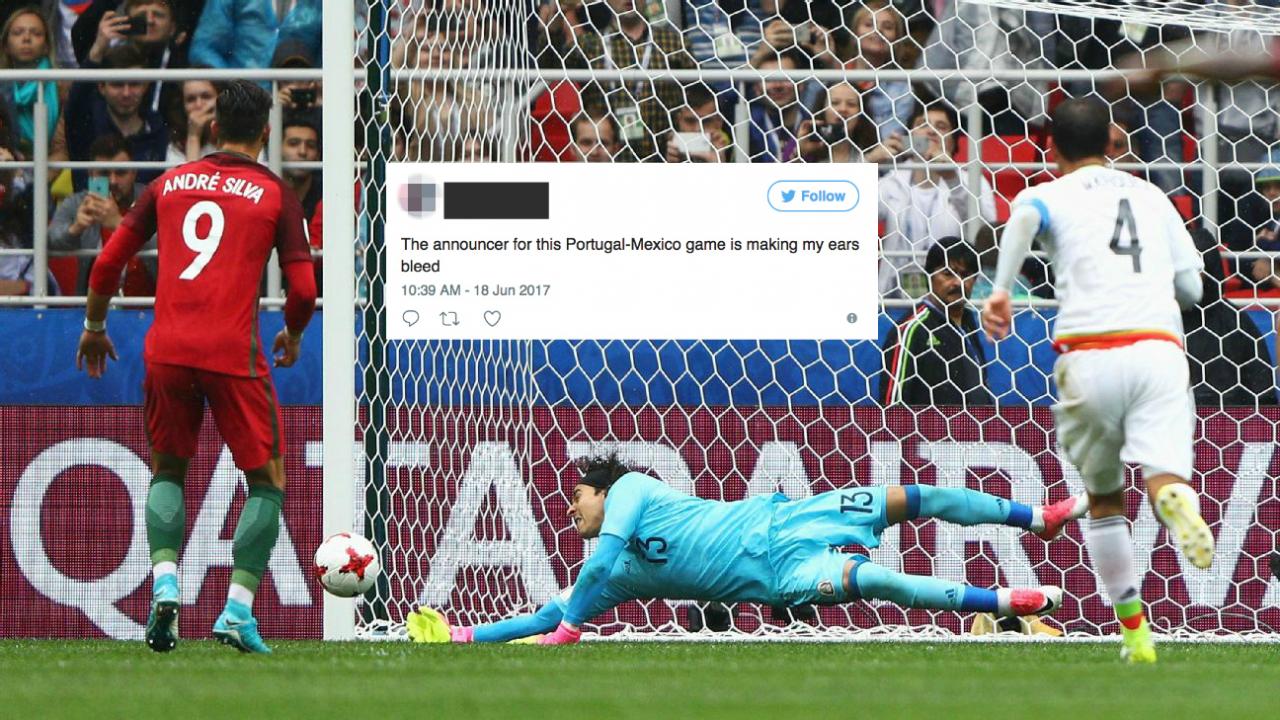 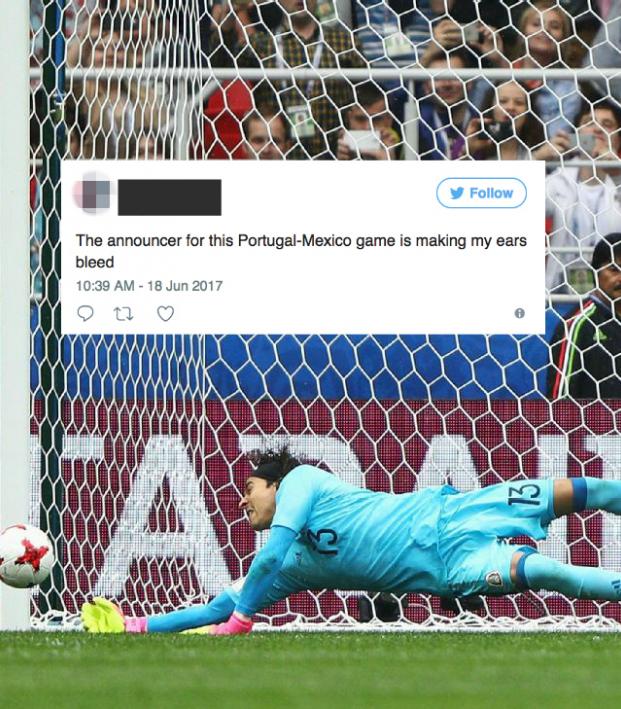 You likely know by now the outcome of the third-place match between Mexico and Portugal in the 2017 FIFA Confederations Cup. If you don't, let us catch you up.

After a series of impressive saves (including a penalty) from Man of the Match Guillermo Ochoa, Mexico were just three minutes away from a third place finish. Then Pepe got ahold of a cross from Ricardo Quaresma to send the game into extra time.

The goal was exciting. It led to an eventual win for Portugal when Miguel Layún conceded a handball, which resulted in a penalty kick that even Ochoa couldn't save. But even more exciting than the goal itself was the call from Mexico-Portugal announcer Jorge Pérez-Navarro. Just listen.

Mexico were just 3 minutes away from a 3rd-place finish at #ConfedCup.

Those of you who have watched any amount of soccer will know that voice. Pérez-Navarro has called a wide variety of sports events, including FIFA World Cups, Copa América championships, Copa MX tournaments and several CONCACAF qualifiers. He's even earned the title of "The Spanish Voice of Soccer in the United States."

But it turns out viewers don't know what they think of "The Spanish Voice." The reactions on Twitter throughout the Confederatons Cup have been swift, confused and sometimes vengeful.

Take for instance, "Matt," who apparently headed straight to urgent care after the group-stage match between Portugal-Mexico to have his bleeding ears repaired. (This is a wise choice. Kids...should your ears bleed, it is a bad sign. Have them inspected immediately.) We are starting a GoFundMe page to cover the cost of Matt's ear repairs. OK...no we're not. But someone should.

On the other hand, "Steve J" was so excited by Pérez-Navarro's announcing that his grasp of grammar and the need for subject-verb pairings broke down immediately.

@FOXSoccer whoever this announcer is on the Portugal vs Mexico game is great. My is watching just because of him.

Conspiracy theorist "Austin" made a connection so obvious it's hard to believe anyone else missed it.

Meanwhile, "DieselCane," who we can only believe is Vin Diesel's older, less popular brother, joined "Matt" at urgent care to have his ears checked out. (Someone update that GoFundMe page.)

This announcer for Mexico Portugal is ear cancer

"Burton" recorded the Mexico-Portugal group-stage match, only to have his entire experience ruined by Jorge Pérez-Navarro's incessant need to announce the "goallllls" in the match, which clearly should be honored with a moment of silence and perhaps a golf whisper. (Also "Burton," good catch with your correct use of onomatopoeia in this instance.)

Tried watching recording of Portugal v Mexico but the announcer is completely unlistenable. Why do they have to say goalllll, etc. Stupid!

And then there was "Matt R.," who broke down the whole situation accurately and eloquently with the aplomb of that mid-level manager at work who likes to "tell it like it is" in your annual review.

@FOXSports Thank you for making Mexico unwatchable with the most annoying announcer of all time. What the actual fuck were you guys thinkin?

I want what Jorge Perez-Navarro eats for breakfast.

Whatever the case, we like what you're doing Jorge Pérez-Navarro. Don't let the haters get you down.