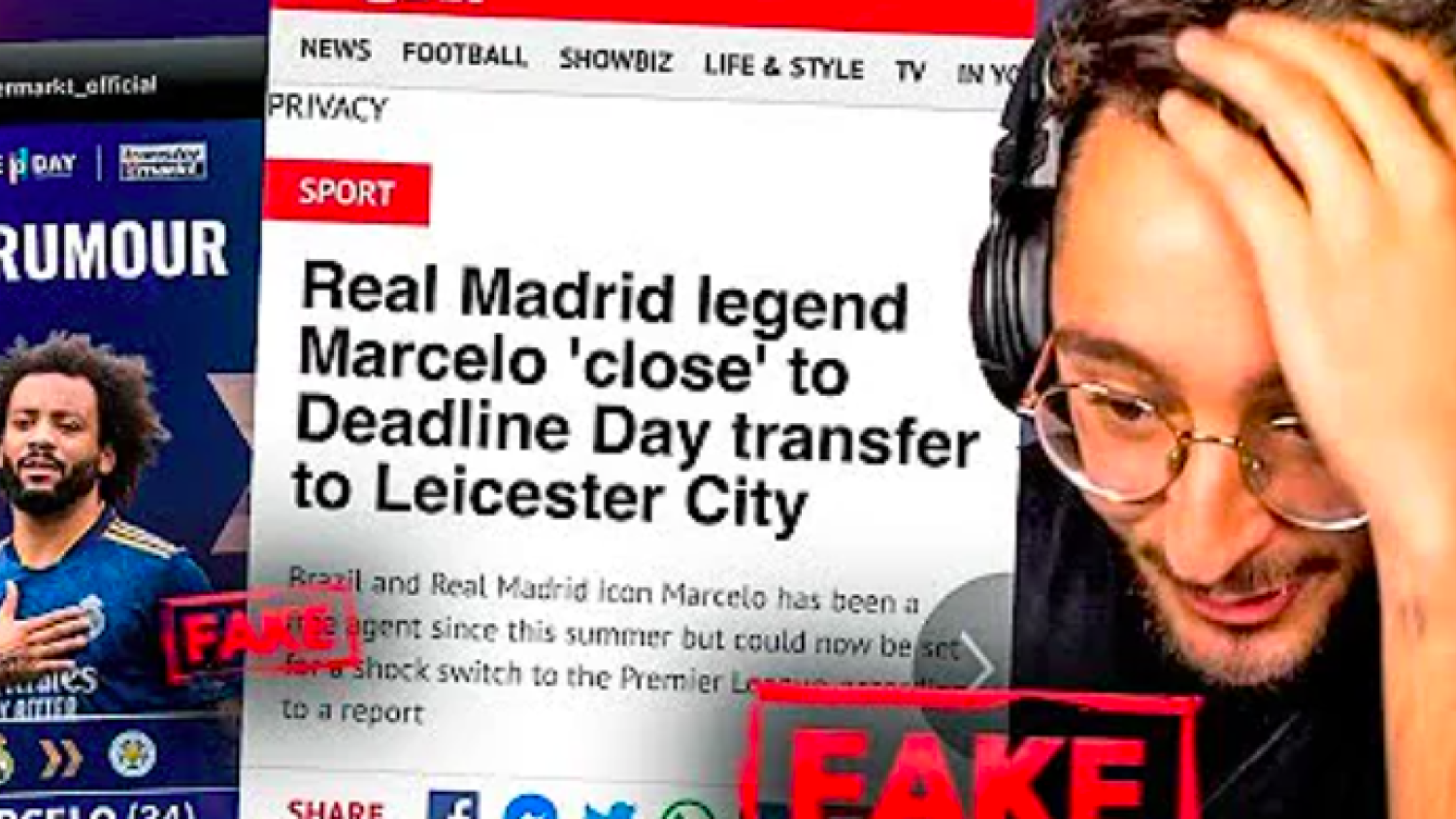 Even Fabrizio Romano fell for it.
Spursito El Mejor | YouTube

If you saw anything about Marcelo being linked to Leicester City in the last day of the transfer window, it was probably fake, and you can thank Spursito for that.

The transfer window is, as we know, filled with an absurd amount of rumors and leaks of potential signings in the world of soccer. We’re thrown stories and "exclusives" that unfold transfer fees, contract sizes, talks, meetings, you name it. Yet, are they true?

Spursito, for one, showed us that we are often catered stories and rumors for the sake of clicks rather than for their validity.

Spursito is a Spanish YouTuber, Twitch streamer and FIFA gamer who has over 300K followers on Twitter.

He often records his live reactions to soccer games in Europe, especially those of Barcelona, his favorite club.

As a means for content, Spursito figured the last day of the European transfer window, or Deadline Day, as the perfect opportunity for him to use his platform and following to prank journalists and the media across the world with a fake transfer rumor, something he has already done in the past.

The YouTuber has, along with his viewers, pranked Twitter with fake rumors about Zlatan Ibrahimović transferring to Barcelona in 2019 and Ben Brereton to Barcelona earlier this year.

On this ocassion, Spursito began his master plan by teasing a transfer rumor of a Brazilian with emojis.

Twenty minutes later, the Spaniard dropped the “bomb.” He tweeted out the "exclusive" story that Marcelo was joining Leicester City and that he was bound to complete his medical with the club.

This, as expected, gained a lot of traction and shares — racking up over 20,000 likes and close to 5,000 retweets on the platform.

Soon enough, the fake story made its way to basically every media outlet you can think of.

Marcelo is on the verge of signing for Leicester City on a one-year contract.

Subject to a medical.

| Marcelo has been approached by Leicester City, but it's not a done deal. Still open. @FabrizioRomano #rmalive

BREAKING: Marcelo is on the verge of signing for Leicester City on a one-year contract.

You can go on Spursito’s Twitter and see how many more accounts and outlets fed into the story. Absurd.

Fabrizio Romano Falls For The Rumor

Like we said, the story’s traction across Twitter was huge, and it spread so quickly that even Fabrizio Romano — the most trusted transfer source in world soccer — fed into the fake rumor.

In Romano’s Deadline Day livestream, the journalist reported that he was told there was an indeed an approach by Leicester.

Not you Fabrizio, not you.

Don’t Trust Everything You See, Folks

Spursito exposed media outlets and accounts for constantly reporting or sharing information about transfer rumors they clearly have no idea about.

Although it was probably the last thing on people’s minds that he had made up the rumor, considering Spursito is infamously known for making up rumors about transfers, half of Twitter still chose to cover the rumor.

It’s eye opening to think about how many other rumors we’ve been catered in the past that were untrue or made up and we didn’t even know it.

That's modern-day news for you.