Bayern’s Trip To Snowy Kyiv Was Full Of Beauty, Pain 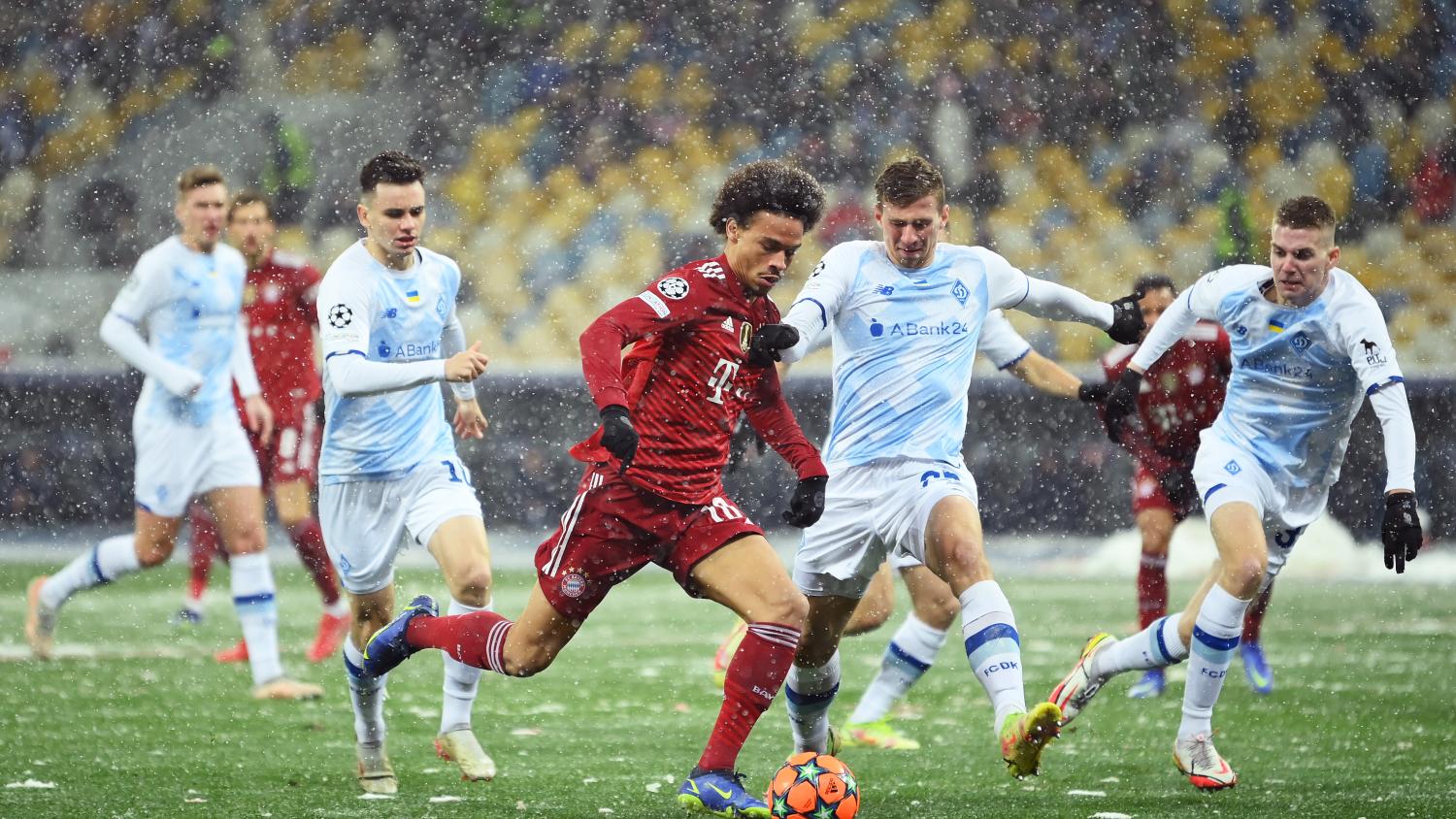 From a bicycle kick to a shot to the crotch, relive the splendor and agony of Bayern Munich’s win over Dynamo Kyiv.
Getty Images

With 30-degree temperatures and steady snowfall, Bayern Munich beat Dynamo Kyiv 2-1 in the Champions League on Tuesday at Kyiv Olympic Stadium. It was a match of beauty and pain, though fortunately the beauty will last longer than the pain, as Bayern clinched top spot in Group E thanks to a pair of gorgeous goals from Robert Lewandowski and Kingsley Coman.

The playing conditions in Kyiv on Tuesday were far from ideal, unless you’re Bayern’s Alphonso Davies. The fullback went from a wind chill in the single digits as Canada beat Mexico in Edmonton last Tuesday to the 98 percent humidity of Kyiv’s cold. Canadians are just built different; if that were me, I’d have pretended to have Covid-19 to avoid those matches. In fact, six Bayern players were missing Tuesday because they conveniently came into contact with Covid-19.

Bayern played just fine in the sub-freezing temps, but it won’t have made what happened to Corentin Tolisso any less painful. Early in the match he was drilled by teammate Leon Goretzka’s shot in a place that’s sensitive at anytime, especially when it’s as frigid as it was Tuesday.

It nearly got more painful for Bayern when goalkeeper Manuel Neuer, one of the most sure-footed keepers in the world, whiffed on a back-pass. He turned and watched while horror turned to relief when the ball struck off the post and was cleared by Benjamin Pavard, the lone Bayern player who opted against wearing sleeves.

But there was beauty on the pitch as well, at least from a German perspective.

With eight goals already in Champions League play, Lewandowski entered Match Day 5 with more goals than the entire rest of Group E combined. It took him less than 15 minutes to add to that tally, and in some style. The Lewandowski bicycle kick goal vs. Dynamo Kyiv was the perfect cup of hot chocolate and peppermint schnapps to go with the frigid weather.

Bayern’s second wasn’t quite as spectacular, but it was still a joy to watch. Thomas Müller sprung Coman with a clever (and a bit silly) dummy run before the Frenchman rifled a shot into the upper 90, bringing down a lovely cascade of snow from the crossbar and net.

He scores his first Champions League goal of the season. pic.twitter.com/rCqeFAjV3f

By the start of the second half, the snow stopped falling and the grounds crew did well to return the pitch to its natural green hue. The result, oddly enough, was Dynamo Kyiv immediately growing into the game, creating its best chance moments after the second half kicked off.

Then Kyiv scored its first goal of the group stage, a well-worked move that ended with Denys Garmash going five-hole on Neuer.

Dynamo get their first goal of the UCL season. pic.twitter.com/9Owfqfy1NV

Dynamo pushed for an equalizer, but the German giants held firm, ensuring Barcelona will at least qualify for the Europa League parachute should Xavi’s side not reach the Champions League knockout rounds. Barça (6 points) and Benfica (4) kicked off later on Tuesday in Barcelona.