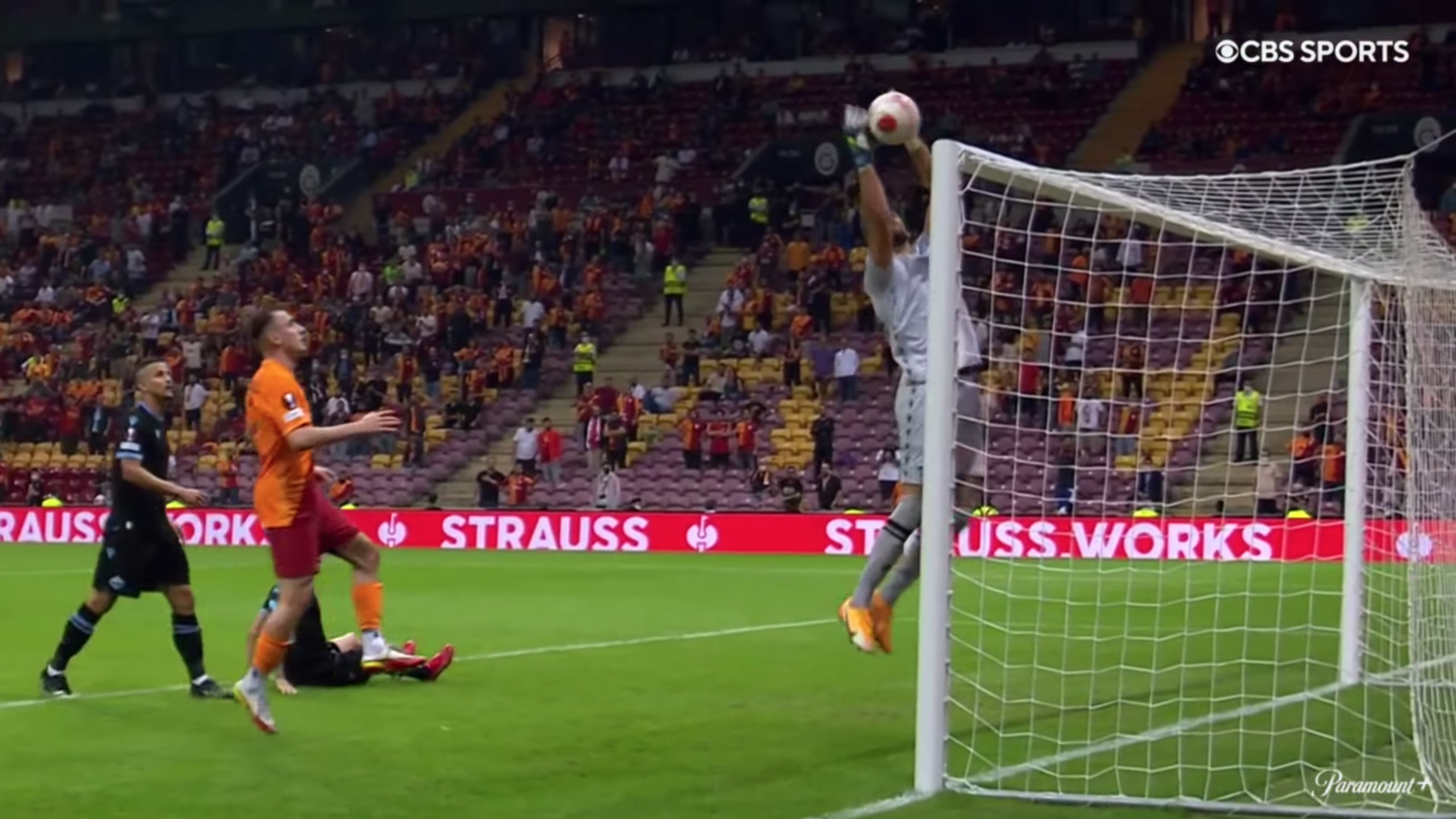 Thomas Strakosha committed one of the most bizarre own goals we’ve ever seen.
CBS Sports Golazo - Europe | YouTube

When people ask me why I love soccer, I usually talk about how no sport allows players the freedom of creativity like the beautiful game. Maestros can move the ball around the pitch the way an artist moves her paint brush. Registas can pull the strings the way a master violinist plays a solo. Finishers can bring a crowd to its feet faster than the Pope.

But also, I just love all the wacky shit that happens, like the bizarre own goal that proved to be the difference in Galatasaray’s 1-0 win over Lazio in the Europa League on Thursday.

For years Thursdays have been the day for dumb soccer stuff to occur. With the addition of the Europa Conference League this year, there is no shortage of weird matchups across the continent. In all, 29 matches were played on Thursday, including Lazio’s trip to Istanbul.

It was the match in Turkey that drew my attention above all others on Thursday because of the Lazio own goal vs Galatasaray, one of the wackiest goals of the season, if not ever.

We’ve seen our share of own goals this year, especially at the Euros. But I don’t know if you’ll find a weirder one than this.

Lazio Own Goal vs Galatasaray

OWN GOAL OF THE WEEK?! pic.twitter.com/TVssBbS7h5

On an attack started by American fullback DeAndre Yedlin, Olimpiu Vasile Moruțan dashed toward the box before lobbing a hopeless cross into the area toward no one in particular. Despite no Galatasaray players in the 18, fullback Manuel Lazzari made a lunging attempted clearance, looping the ball nearly straight up.

Thomas Strakosha, one of the better keepers in Serie A, then channeled his inner LeBron James — or Martin Dúbravka? — and dunked the ball into his own net. He actually fumbled the ball off the post, and it then bounced off him again and into his own net.

Strakosha was, ultimately, credited with the own goal, though Lazzari certainly deserves some of the blame. Either way, Yedlin couldn’t contain his smile. Just look how happy he is!

The goal proved to be the winner, only making the own goal feel worse for Strakosha.

At least when Dúbravka dunked on his own net, his Slovakia team ended up losing to Spain 5-0, so the own goal could be partially forgotten.

DUBRAVKA PUNCHES IT INTO HIS OWN NET pic.twitter.com/gL7OTrIi1v

Here are the full-match highlights from the game, and in case you want to just skip to the own goal, you can find it at 3:57.

Was the Lazio own goal vs Galatasaray the worst own goal of 2021? That’s hard to say.

It was certainly weirder than Dúbravka’s dunk because Strakosha’s teammate kicked the ball up instead of it bouncing off the crossbar. But it’s hard to top this Haiti own goal vs. Canada in World Cup qualifying.

An own goal from Josue Duverger gives @CanadaSoccerEN the lead pic.twitter.com/qHEWFcmcc0

But you know what? We don’t have to pick the best/worst — we can just enjoy the fun that soccer brings us, especially on Thursdays.