NEW YORK — Los Angeles, Toronto and Mexico City have been named among the host cities for the 2026 World Cup in the United States, Canada and Mexico, marking the first time the tournament will be shared by three different countries.

World soccer governing body FIFA announced the 16 cities — 11 in the United States, three in Mexico and two in Canada — that were successful from the 22 bids put forward in a special event at the Rockefeller Center in New York on Thursday. However, there was no indication where the opening game or the final would be played.

The United States will host games in Seattle, San Francisco, Los Angeles, Kansas City, Dallas, Atlanta, Houston, Boston, Philadelphia, Miami and New York/New Jersey. Mexico, who hosted the World Cup in 1970 and 1986, will stage games in Mexico City, Guadalajara and Monterrey, while Canada, which is hosting the men's event for the first time, will do so in Vancouver and Toronto. For a full look at the 16 stadiums, click here. 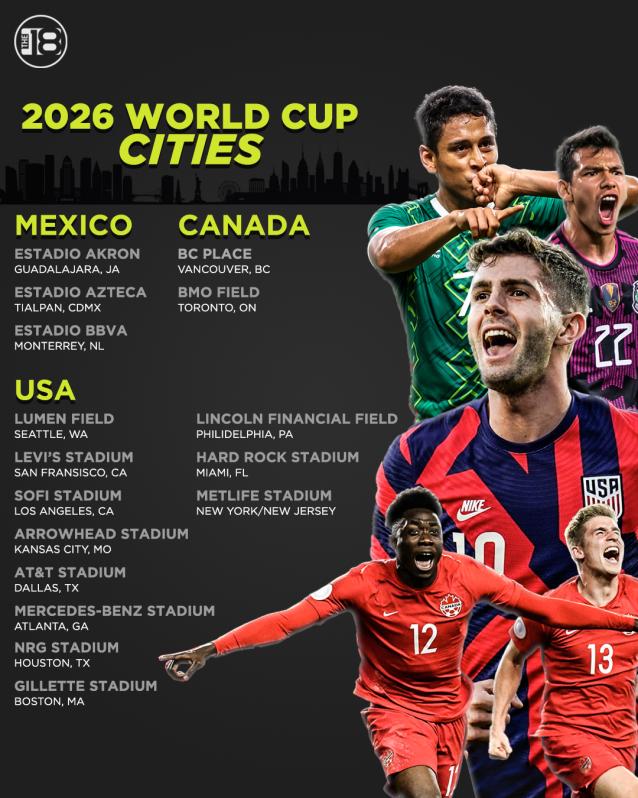 "It was the most competitive process for a FIFA World Cup, we'll have the world coming here, we'll have an exciting tournament," FIFA president Gianni Infantino said.

He added that no decision had been taken on where the final would be played. Cincinnati, Denver, Nashville, Orlando, Washington DC/Baltimore and Edmonton were the cities that missed out.

Cheering fans waving American, Canadian and Mexican flags gathered outside the venue, with U.S. national team member and 23-year-old Chelsea forward Christian Pulisic among those in attendance for the announcement.

The 2026 tournament is expected to smash World Cup attendance records, which peaked at 3.6 million when it was held in the United States in 1994. It will also be the first time 48 teams will feature in the tournament, an increase from the 32 that will contest this year's event in Qatar.