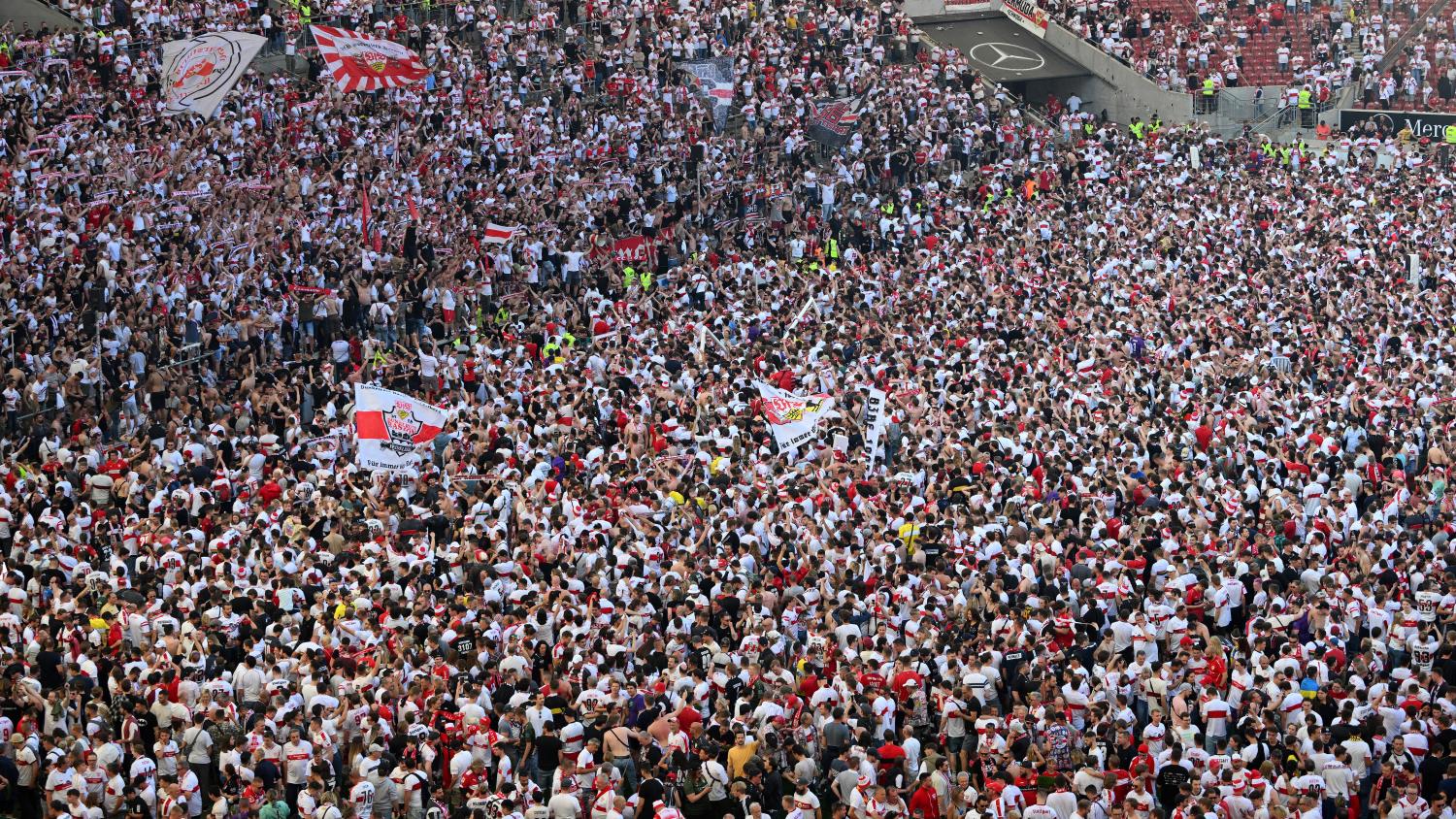 The final day of the Bundesliga brought a few epic moments to close out the season.
Getty Images

There’s something about simultaneous kickoffs on the final day of the season that makes for must-watch viewing. The Bundesliga season came to a close on Saturday with all nine matches kicking off at the same time. While the title was long ago clinched by Bayern Munich (as usual), there was drama around the European places and relegation zone on the final day.

Most dramatically, Wataru Endo scored a 92nd-minute winner to beat Cologne and confirm Stuttgart will be back in the Bundesliga next season. Die Roten needed a win over Cologne and Hertha Berlin to lose to Dortmund to ensure survival, and Dortmund eked out a 2-1 win over Hertha thanks to a late goal from 17-year-old Youssoufa Moukoko.

When the final whistle blew and Stuttgart avoided relegation, fans stormed the field in celebration.

STUTTGART SCORE A 92ND MINUTE WINNER TO STAY IN THE BUNDESLIGA!!! pic.twitter.com/MSCfun2LSg

Arminia Bielefeld and Greuther Fürth were relegated to the second tier, but Hertha Berlin isn’t confirmed going down just yet.

The 16th-place team in the Bundesliga goes to the relegation playoff against the third-place team from the 2. Bundesliga. Currently, Schalke has confirmed promotion back to the Bundesliga, while Werder Bremen (60), Hamburger (57) and Darmstadt (57) have realistic chances to finish second or third. The 2. Bundesliga campaign ends with simultaneous kickoffs on Sunday.

At the top of the Bundesliga, Bayern Munich won its 10th straight title and 31st overall. Dortmund, Leverkusen and RB Leipzig secured the other three Champions League spots, Leipzig needing a late equalizer from Willi Orbán against Arminia Bielefeld to ensure its place.

For a while, it looked like Freiburg might jump up into fourth place ahead of Leipzig after a late equalizer from Janik Haberer while Leipzig still trailed. Another Freiburg goal would have sent the club to the Champions League, but instead Exequiel Palacios scored from midfield with keeper Mark Flekken having come up in search of that winner. In the end, Orbán’s goal was enough for Leipzig to finish fourth, while Union Berlin beat Bochum thanks to an 88th-minute goal from Taiwo Awoniyi to ensure its place in the Europa League, sending Freiburg to the Europa Conference League.

The final day of the Bundesliga season was also a time for farewells, particularly to two of the league’s best strikers.

Erling Haaland’s impending move to Manchester City has been widely reported, and he scored a penalty in his final appearance for the Black and Yellows.

Of course Erling Haaland scores in his final game for Dortmund! pic.twitter.com/gHIdTg1LZH

Similarly, Robert Lewandowski has been rumored to want out of Munich, which was confirmed on Saturday by the Bayern sporting director. As Lewa has done his entire career in Munich, he scored again on Saturday in a 2-2 draw with Wolfsburg, whose American center back John Brooks could only watch.

50 GOALS FOR LEWI THIS SEASON!

The Polish superstar completed another remarkable season in Bavaria. A year after breaking Gerd Müller’s single-season Bundesliga goals record, Lewandowski scored his 50th goal on Saturday across all competitions, including 35 in league play, another 13 in 10 Champions League matches and two in the DFL Supercup.

Lewandowski is rumored to want to go to Barcelona, though Bayern has said it doesn’t want to sell with a year left on his contract. Wherever he is next season, you can expect another incredible goal return from the 33-year-old.

Now Hertha awaits its opponent in the promotion/relegation playoff in the final game of the German season.