Travis Yoesting November 17, 2021
Édouard Mendy is a Chelsea goalkeeper with no rape charges to his name, but some media outlets have been unable to figure that out.

It’s not uncommon, watching a European soccer match, to hear a British announcer repeatedly misname a Black footballer. It happens so often now I’m surprised EA Sports hasn’t decided to add the mistakes to its FIFA video games. After all, if it’s in the game, it’s in the game, right?

But what’s happening now with British and French media goes far beyond a broadcaster being unable to quickly discern a player on the pitch. What’s happening now is journalists being unwilling to take the time to discern who is in a photo before publishing it as an accused rapist.

Chelsea goalkeeper Édouard Mendy and his cousin Ferland Mendy, a Real Madrid left back, called out media outlets who have repeatedly used their likenesses in stories about someone not even related to them: Manchester City left back Benjamin Mendy, who awaits trial after being charged with six counts of rape. Despite the fact none of them play for the same team, British and French media have been unable to figure out who is the accused rapist and who is a Black man just trying to do his job. 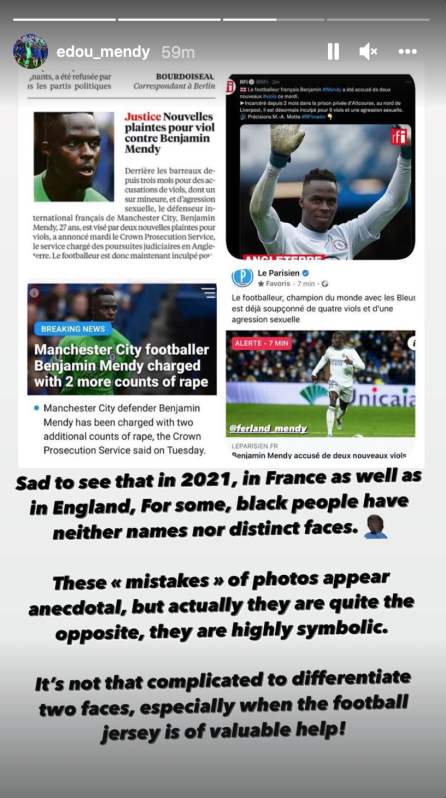 “Sad to see that in 2021, in France as well as in England, For some, black people have neither names nor distinct faces,” Édouard Mendy wrote. “These ‘mistakes’ of photos appear anecdotal, but actually they are quite the opposite, they are highly symbolic. It’s not that complicated to differentiate two faces, especially when the football jersey is of valuable help!”

The post shows four different instances of media using Édouard or Ferland Mendy’s image in a story about Benjamin Mendy. As a journalist who once designed newspaper pages, it is unconscionable to run the wrong photo like this, especially in a rape case.

To make it even worse, these athletes are wearing uniforms, with numbers and logos. If you can’t figure out the difference between a Chelsea goalkeeper uniform and a Manchester City uniform, you probably shouldn’t be involved in publishing stories about rape. Édouard Mendy even has his goalkeeping gloves visible in one of them.

As Édouard Mendy points out, this is yet another case of racism in football.

Before you get up in arms and start shouting about CRT or some nonsense, I’m not saying whoever published the incorrect images is definitely a member of the KKK. It’s possible for racial prejudice to happen without an actual racist.

These errors happen far too often for them to be written off as simple mistakes; they’re the result of generations of systemic racism, wherein Black names and faces are not deemed important enough to remember or discern.

I had to ask myself how such a horrible gaffe could be made. Whoever found these images must have been too lazy to spell out “Benjamin” in the search function of whichever photo service was being used. Even then, they would have had to ignore the cutline explaining it was Édouard Mendy and not Benjamin Mendy. And finally, they would have had to completely ignore what was actually in the image, including the face of the athlete and the jersey being worn. The number of fuckups that had to take place are staggering when you think about how often it happened.

Hopefully by Édouard and Ferland Mendy calling attention to this, more members of the media will double and triple check the images they publish. Better yet, media outlets need to hire more people of color to help prevent oversights in a white-dominated profession. And maybe a few people need to be fired, or at the very least suspended.