Cristiano Ronaldo Cries Over Being Benched During 3-1 Win 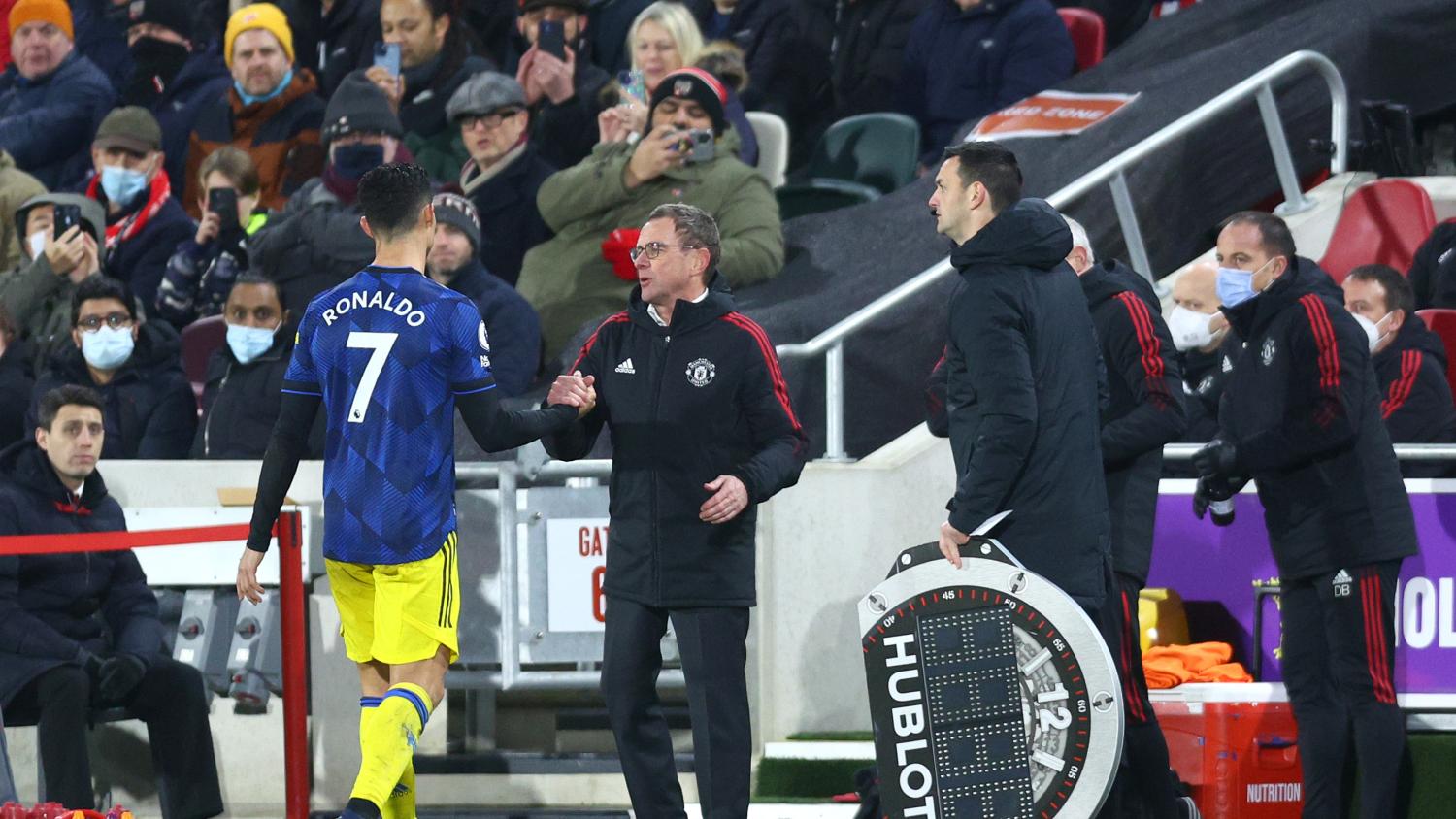 Ronaldo was benched with a two-goal lead, but he just wanted to do more goals.
Getty Images

Cristiano Ronaldo is a marvel; the 36-year-old continues to be one of the best forwards in the history of the beautiful game. But sometimes marvels can pout like spoiled kids, as happened when we saw Ronaldo benched by Manchester United coach Ralf Rangnick on Wednesday.

Ronaldo started Manchester United’s 3-1 road win against Brentford on Wednesday after missing the prior three matches with a hip injury. Soon after the Portuguese No. 7 helped create the goal to make it 2-0 with a superb chest pass, United coach Rangnick subbed Ronaldo out for center back Harry Maguire. It seemed obvious why: protect his star man from injury.

Ronaldo was not happy.

Despite coming off an injury and the match well in hand, Ronaldo sulked off the pitch as if his mom had just told him no screen time until his homework is done. He added a petulant toss of his jacket after he couldn’t find the arm hole before finally sitting down, tears welling in his eyes.

Cristiano Ronaldo did NOT like being taken off against Brentford pic.twitter.com/9OT32QE3fY

Cristiano Ronaldo was not happy after being substituted for Harry Maguire pic.twitter.com/qwoXPEwlez

Ronaldo was visibly upset after being subbed off

As he sat on the bench, the TV broadcast focused almost entirely on Ronaldo, as if the rest of the match didn’t even matter. Let’s be honest, you were just as engrossed by the drama as the TV producers. Lip readers could see Ronaldo mouth “Why did he take me off?”

Later, as Marcus Rashford made it 3-0, Rangnick was consoling his star man (who finally found that arm hole on the jacket) and not celebrating the goal with the team.

Rashford scores and United are flying in the second half!

There are two ways you can react to such an outpouring of emotion from Ronaldo.

The most common refrain you’ll hear this week is how Ronaldo is a big baby whose body language is hurting Manchester United. You can expect all the talking heads to bash Ronaldo for these actions, not that Ronaldo will care at all.

The other way to look at Ronaldo’s pouting is to respect the 36-year-old for being so devoted to scoring goals he’ll cry on the sideline when he isn’t given more chances to put the ball in the back of the net. Personally, I’m inclined to take this viewpoint when talking about arguably the greatest goal scorer of all time.

I’m no Ronaldo apologist (personally I prefer Lionel Messi, but it turns out you can enjoy both players and not spontaneously combust). I think he’s got a massive ego and often seems to care more about scoring goals himself than anything else. The Ted Lassos of the world can’t stand players who appear selfish like this.

But it’s Ronaldo’s thirst for goals that have made him such a remarkable player; if you take away that desire and hunger, you’ve got nothing.

If you want to enjoy Ronaldo’s goals, you better enjoy him pouting about being taken out of a match with a two-goal lead. You can’t criticize what makes the man great without criticizing the great man.

As for Ronaldo’s team, United did just fine. Anthony Elanga, a 19-year-old Swede, scored the opener in the 55th minute, Mason Greenwood made it 2-0 in the 62nd and Rashford’s goal in the 77th ensured all three points. Ivan Toney scored a consolation for the Bees in the 85th minute.

With the win, United moved into a tie on points with Arsenal for sixth place, in seventh only on goal difference. (The Gunners were leapfrogged by Tottenham, which scored two goals after the 95th minute to beat Leicester on Wednesday.) Ronaldo won’t be happy with not scoring on Wednesday, but he’ll be happy with the win, even if he doesn’t want to be fighting for sixth place.