Travis Yoesting January 28, 2021
One of the world’s best teams pulled out and was replaced by a team that doesn’t respect its players, highlighting the absurdities of playing sports in a pandemic.

Japan is out. Argentina is in. It’s all absurd.

Less than a month before the 2021 SheBelieves Cup, the tournament has been forced into major changes. The 2011 World Cup champions pulled out of the tournament citing Covid-19 issues and were replaced by the 31st-ranked team in the world, one that struggles mightily for respect from its own federation.

NEWS: Argentina has replaced Japan in the sixth annual #SheBelievesCup, Presented by @Visa and will join the USA, Brazil and Canada in the four-team field

The 2021 SheBelieves Cup will now include the USWNT, Brazil, Canada and Argentina, making it an all-Americas affair for the first time ever. Argentina will slot in to Japan’s slated matches so the schedule won’t be changed. 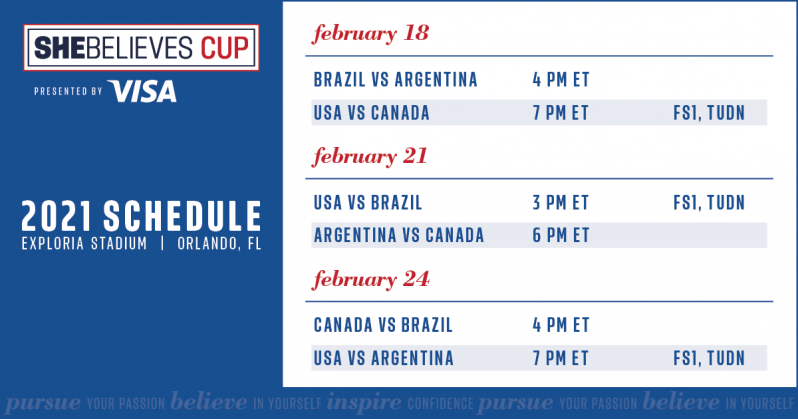 Make no mistake about it, losing Japan is a big blow for a tournament that already lost one of its biggest draws in England, which will miss the SheBelieves Cup for the first time in its existence (since 2016). Japan is ranked 10th in the world and has won the last two Asian championships.

Japan said it pulled out because of the current status of Covid-19 in the country. The country of 126 million recently instituted a state of emergency over the rising number of cases. Over the weekend, Japan reached 5,000 deaths from Covid-19. Just like in the U.S., things are getting worse before the vaccine can be fully rolled out and there is a great worry over the status of the 2020 Olympic Games, which are slated for Tokyo this summer.

It’s absurd to think about the Nadeshiko pulling out of the tournament despite the country doing far better with Covid-19 than the U.S., where the SheBelieves Cup will take place, but that’s where we are. The U.S., which is about 2.5 times larger than Japan, has recorded more than 424,000 Covid-19 deaths.

Just as absurdly, the 2021 SheBelieves Cup will be held in Florida, which has had five times more Covid-19 deaths — 25,832 as of Wednesday — than Japan despite being six times smaller. Somewhat comically, Florida has offered to host the Olympics this summer if Tokyo cannot.

Without Japan, the tournament won’t have quite the same allure as it has in past years. As mentioned, there is no England this year, no France, no Germany, no European powerhouse at all to test the Concacaf and CONMEBOL squads.

The worst team by FIFA ranking to take part in the SheBelieves Cup prior to this year was Spain last year, which came in ranked 13th. That will more than double with Argentina (31) replacing Japan. It’s an unfortunate necessity in the time of Covid-19 to have less-than-ideal competition.

There is a much greater drop-off in quality among the top teams in women’s international soccer compared to the men’s game. The USWNT recently played a couple friendlies against Colombia, winning the two games by a combined 10-0. While Colombia didn’t have its full squad available, it is ranked 26th in the world, five spots ahead of Argentina, and still couldn’t keep it close against the U.S.

This isn’t to gripe about the quality of Argentina’s women’s team. The players themselves haven’t exactly been given opportunities to be the best team they can be. While most of the country pays attention to Lionel Messi’s inabilities to win a World Cup with his indifferent Argentina team, the women’s team has had countless problems. The women were completely inactive for 18 months from 2015-17, players went on strike over unpaid stipends and last year La Albiceleste didn’t play a single match.

Argentina had its best showing at a Women’s World Cup in 2019, recording impressive draws against Japan and Scotland for its first points in a major tournament (outside of Copa América). It showed the potential of this team, if only the FA would invest in it. But as the Equalizer laid out in July 2019, it’s been a struggle for the women. It is unlikely Argentina will have its best XI available in the U.S. in February.

Before someone reports it wrongly, just in case, Argentina will probably won't have ex-NWSL player Estefanía Banini because, alongside other important players, have protested against the coaching staff, asking for better conditions after the World Cup.

Hopefully the 2021 SheBelieves Cup can be a boon for La Albiceleste (and hopefully they get paid well for taking part), but there’s no doubt Argentina provides far less competition than Japan would have.

The 2020 SheBelieves Cup finished March 11, just before the sports world ground to a halt over the coronavirus pandemic. A year later, sports have done their best to cope with playing during a global health crisis. Some leagues have done better than others — the NWSL Challenge Cup was superb, the cancellation of countless women’s leagues in Europe was not. While I don’t doubt U.S. Soccer will do everything it can to protect the health and safety of all players and staff involved in the 2021 SheBelieves Cup, just traveling to Florida poses a risk.

The whole situation of replacing Japan with Argentina less than a month before the tournament just highlights the absurdities involved in playing team sports during a pandemic, one that’s infected more than 100 million humans, killing more than 2.1 million.