Travis Yoesting March 2, 2021
It’s hard to understate how important 2021 will be for the future of the USMNT.

For the U.S. men’s national team, 2020 was another lost year with a mere four matches played because of the Covid-19 pandemic, by far the fewest in recent memory. This came on the heels of a lost year in 2018, when U.S. Soccer took 14 months to find a new coach after Bruce Arena and Jurgen Klinsmann’s failed World Cup qualifying campaign. Needless to say, the 2021 USMNT schedule could not be more important.

The USMNT went undefeated in 2020, but considering the team tied 0-0 to the one opponent outside of Concacaf, we can’t draw too many conclusions from such a limited schedule. Covid-19 meant Gregg Berhalter rarely got to see his team play, though we did get to see a number of young Americans make their debuts, particularly in a 6-2 thrashing of Panama in November.

In contrast, the 2021 USMNT schedule will be jampacked, as the international game tries to make up for lost time. Currently there are more than 16 games on the schedule. There will likely be a few more friendlies added in plus any knockout-round matches at the Gold Cup.

In many respects, 2021 will be a make-or-break year for Berhalter. Hired in 2018, he has yet to really show what he can do with the national team. To be fair, he hasn’t shown he doesn’t deserve the job either, but 2021 will be revealing one way or the other.

The biggest matches on the 2021 USMNT schedule are the 2022 World Cup qualifiers, which start in September. Berhalter will also have to balance that with the Concacaf Nations League Finals, the 2021 Gold Cup and the Olympics (should the USMNT U-23s qualify).

In addition to another friendly here or there in 2021, the U.S. will also play three more World Cup qualifiers in January 2022 and March 2022. You’ll be seeing plenty of Berhalter and Co. over the next 12 months. 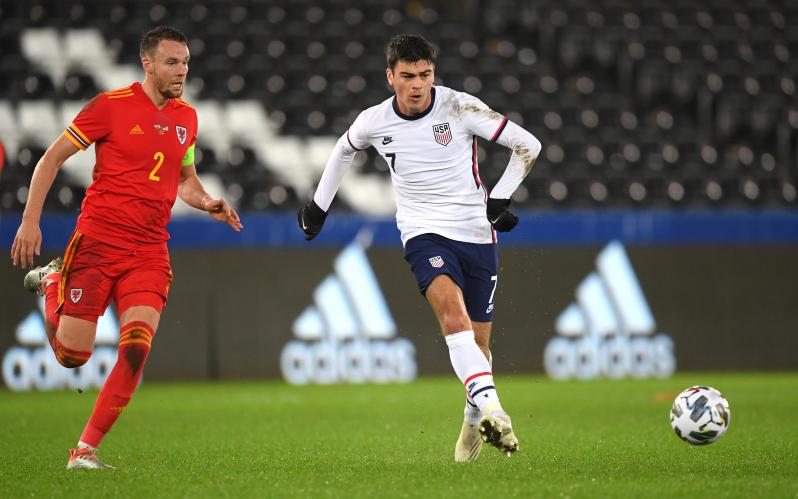 How key will Gio Reyna be for the 2021 USMNT schedule? Photo: Getty Images

The biggest match on the 2021 USMNT schedule will be November 12 when Mexico comes to visit for a World Cup qualifier. The return trip to Mexico will be March 24 of 2022, one of the final qualifiers.

If you’re a USMNT fan, there’s a lot to look forward to in 2021. While much is still in the air because of the ongoing pandemic, it will undoubtedly be more significant than the last three years combined.

Whether or not Weston McKennie, Christian Pulisic, Tyler Adams, Gio Reyna, Sergiño Dest and the large contingent of youthful USMNT stars can start a golden era of U.S. men’s soccer could be determined by this 2021 USMNT schedule.