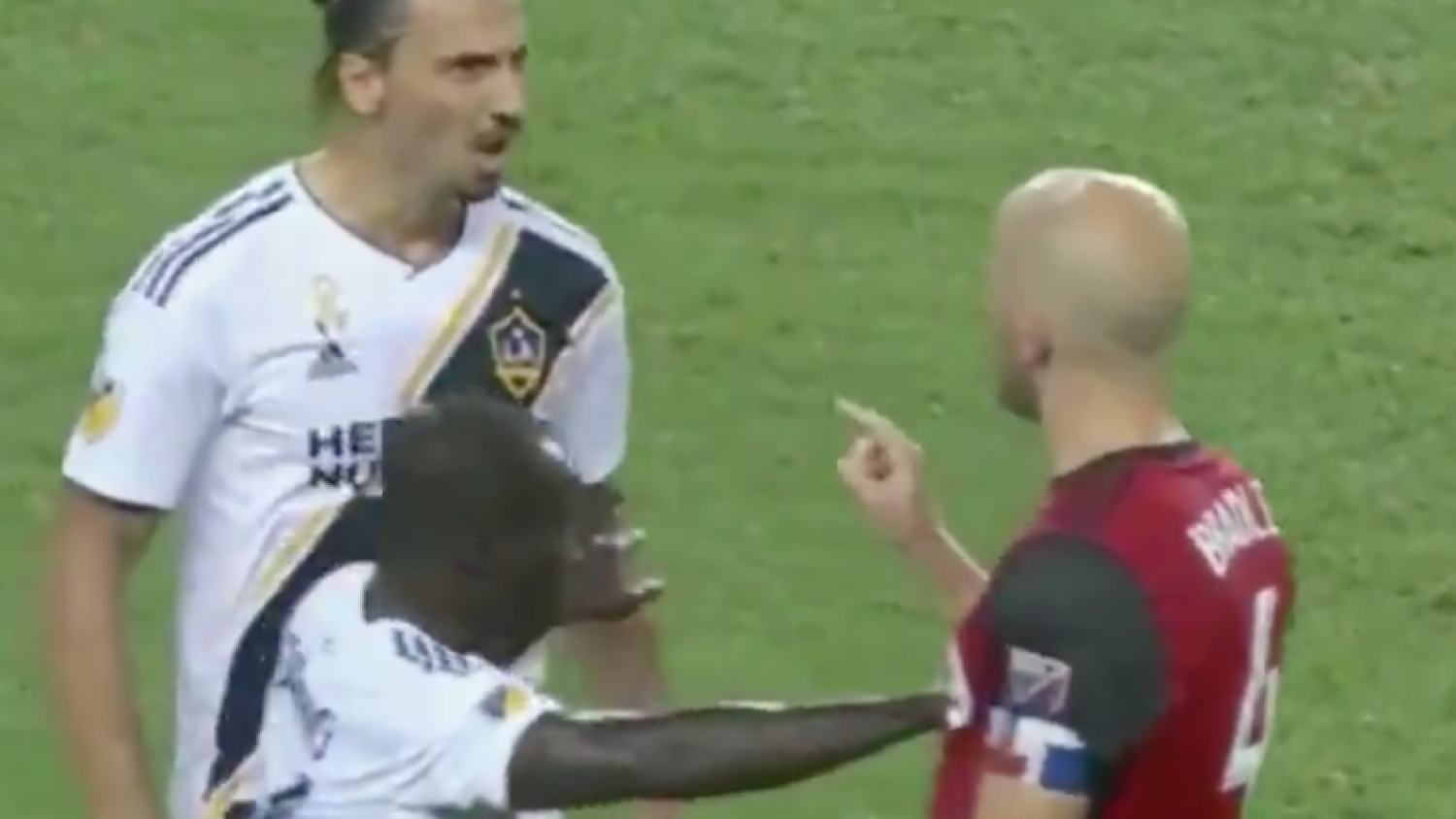 Zlatan Ibrahimovic and Michael Bradley exchanged some heated words on the pitch and Zlatan kept it going after the match.
@JogaBonito_USA | Twitter

Zlatan Ibrahimovic scored his 500th goal on Saturday. It was a remarkable goal for a remarkable achievement. But amidst the craziness of Toronto’s 5-3 win over the LA Galaxy on Saturday was a budding Zlatan-Michael Bradley bromance.

And by bromance, we mean they appear to hate each other.

Late in the match at BMO Field in Toronto, Zlatan and Michael Bradley got into a heated argument, neither willing to back down.

Usually other players quickly back down from confrontations with Zlatan, and he became quite angry when Michael Bradley refused to be intimidated.

Fascinating interchange between two extremely intense characters. I'd love for that to be mic'd up!#TORvLA #TFCLive #LAGalaxy #MLS pic.twitter.com/tJ8LE1ftyx

I can’t read lips, but I’m pretty sure they weren’t discussing the economic benefits of NAFTA.

It’s what was said after the match that really took the Zlatan-Michael Bradley beef up a notch.

“He thinks he’s a philosopher of football; I have more goals than he has (played) games, so he should follow my rules,” Ibrahimovic said.

This isn’t actually true though.

Zlatan has scored 500 goals for club and country, as we’ve discussed. Michael Bradley has played more than 560 matches for club and country. But the fact those numbers are even close tells you how great Zlatan’s career has been, especially considering the caliber of clubs he’s played with.

Zlatan has played for Ajax, Juventus, Inter Milan, Barcelona, AC Milan, Paris Saint-Germain and Manchester United, scoring goals at a high rate all along the way. Michael Bradley has played for Heerenveen, Borussia Mönchengladbach, Aston Vila, Chievo and Roma, scoring a handful of goals along the way (though he is a midfielder, not a striker).

Bradley does have one scoring record over Zlatan: World Cup goals. Bradley scored for the USMNT in the 2010 World Cup, a smashing effort to earn a draw against Slovenia. Zlatan has 62 goals for Sweden, but none have come in the World Cup.

(Can we take a moment to reminisce about Michael Bradley’s hair? That pic is from 11 short years ago. What a stud.)

Bradley kept the banter going by responding to questions about the argument with Ibrahimovic by saying Zlatan doesn’t matter.

Bradley was asked about what happened after the game. He brushed off the question, saying "I'm not worried about Zlatan Ibrahimovic." #TFC

C’mon Michael, we all know Zlatan is worth worrying about. Bradley may have had a nice career by American standards, but Ibrahimovic has had a brilliant career by all standards.

That said, both Zlatan and Bradley are right in their own ways. Bradley has a bit of an air of arrogance to him, perhaps because of his father’s Princeton roots. But no one has more arrogance than Ibrahimovic, whose ego borders on the zany in the most entertaining of ways — indeed, it’s why many love him.

The winner in all this Zlatan-Michael Bradley banter is Major League Soccer.

Ibrahimovic has brought new levels of interest to the league, both for his goal-scoring exploits and his tremendous personality. Adding a little spat with one of the most well-known Americans in the league (and one many love to hate) just makes MLS all the more entertaining.

So please, Zlatan and Michael, keep it up. We just wish your teams were good enough to give us hope for a meeting in the MLS Cup finals.