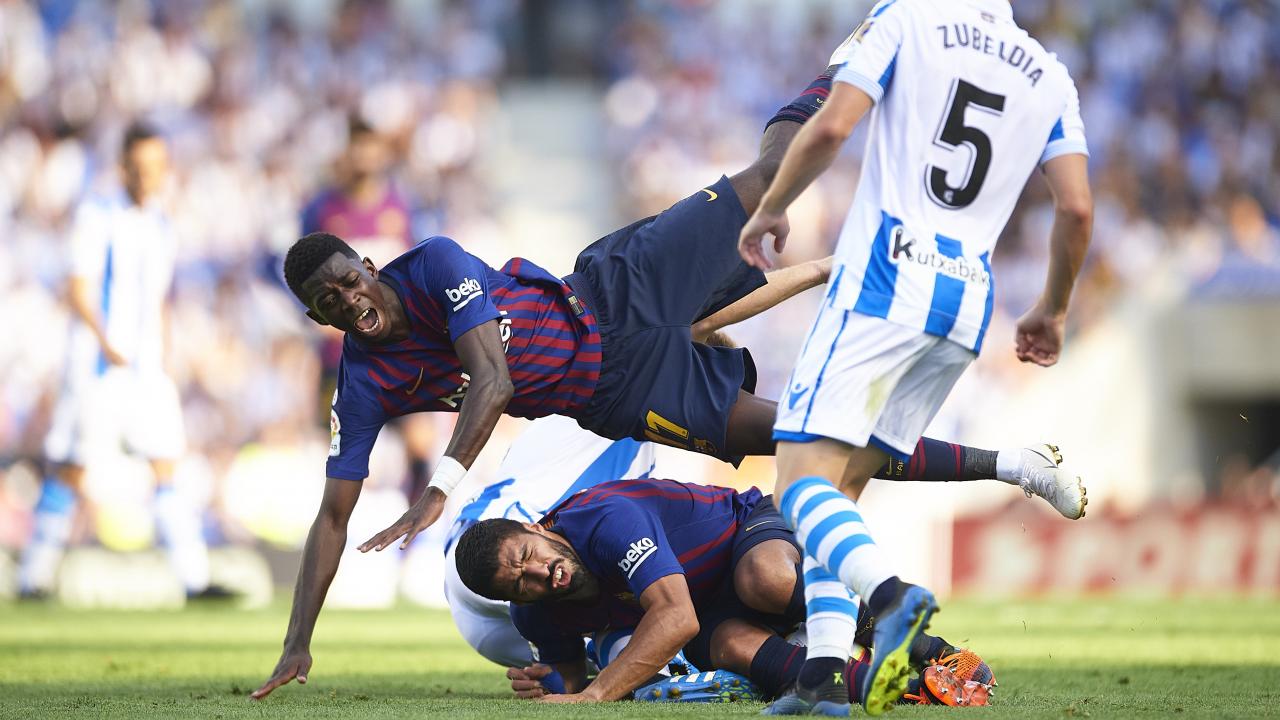 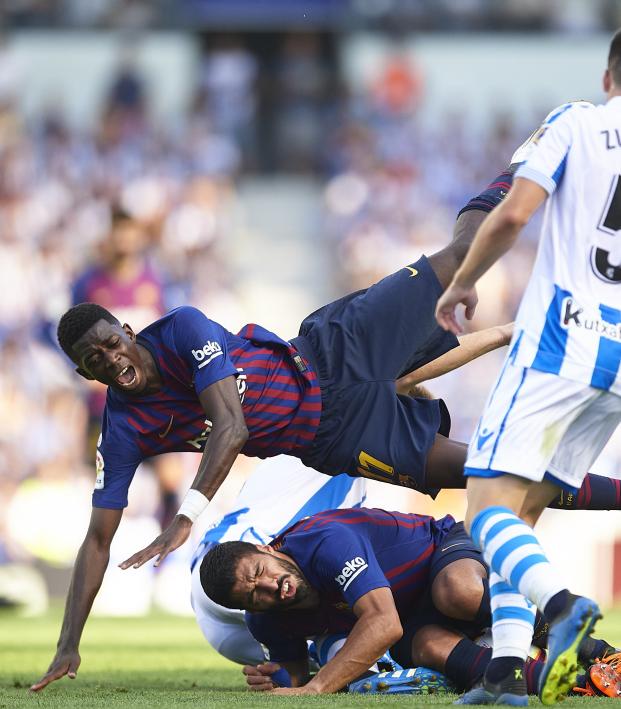 More Than A Barça Comeback, Saturday's Match Was A Real Sociedad Defeat 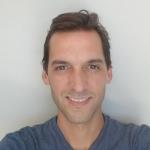 If historians had not located the ancient Sparta territory, I would have guessed it was in the Basque country, precisely in the lovely city of San Sebastian, and that King Leonidas is buried under the turf of Anoeta, Real Sociedad’s stadium, as the almighty Barcelon continues to struggle in the land of Euskera, despite playing against a weaker side (at least in theory).

Since 2007, Barça has only won once in Anoeta, this last January, with an epic comeback after being down 2-0 to finish 4-2. Saturday was not different. The Catalans' 2-1 victory should not cloud what really happened; Real Sociedad lost the match more than Barcelona won it.

The azulgrana team jumped onto the field with a traditional 4-3-3 formation led by Marc-André ter Stegen, defenders Nélson Semedo, Gerard Pique, Samuel Umtiti and Jordi Alba, midfielders Sergi Roberto, Rafinha and Ivan Rakitic, and forwards Lionel Messi (on the right wing), Luis Suarez and Ousmane Dembélé. On the other side of the field they found a 4-4-2 formed by Rulli, Hernandez, Moreno, Elustondo, Zaldua, Zubeldia, Ilarramendi, Zurutuza, Pardo, Oyarzabal and Juanmi.

The Cules did what they always do, pushing up high, explosive counter-pressings triggered by possession loss, taking good care of the ball and being patient to find spaces in the rival’s defensive shape.

Real Sociedad, on the other hand, also faced the match with a game plan we have seen pretty often against Barcelona: tight defensive lines, a 4-4-2 that looks like a 5-3-2 at times, as the right midfielder tracks Jordi Alba’s overlaps and the left back loosens to interrupt passing lines to Messi and keep him close, leaving three central defenders that sustain a numerical advantage against Dembele and Suarez and three holding midfielders that reduce open spaces in shooting range, to then attempt to surprise Barça with quick counterattacks. Well thought and very well executed by Asier Garitano’s team.

By the 13th minute of the first half, Real Sociedad went ahead on the scoresheet after a long free kick to the far post that led to a rebound capitalized by Aritz Elustondo, who sent the ball in with a powerful left foot kick to the same post. Nothing to blame ter Stegen for, that ended up being key to hold the score till the 63rd minute, when the Catalans found the equalizer through Luis Suarez. Until then, Barcelona did not endanger Rulli’s goal, apart from a corner kick that Gerard Pique connected in the air and went out past the first post.

You know things are not going well for Ernesto Valverde’s team when the best chance to score, after 60 minutes, has come from a corner kick. Especially if two minutes before that Real Sociedad wasted an amazing chance to broaden the score when in a perfectly executed counter attack Pardo assisted Oyarzabal that outran Coutinho to poorly finish it, sending the ball over the crossbar.

Coutinho and Sergio Busquets went in during the second half and gave a push forward to the red and blue squad, but the sun still didn’t shine for the visitors, as Ter Stegen twice saved one-on-one situations. Leo Messi was not in PlayStation mode, Suarez was erratic and Dembele was no threat for the txuri-urdines so far.

Things turned around on Barcelona’s favor when Pique hit another corner to the far post that Rulli failed to clear, leading to a messy, two-rebound situation that ended up with Luis Suarez kicking the ball into the net. An unexpected equalizer immediately raised the azulgrana spirit and forced the Spartans to move forward on their pressing line, creating spaces between the defensive lines, that Coutinho almost took advantage of one minute later with a kick to the far post that Rulli saved, sending the ball to a corner kick.

This is where human nature flourishes, capable of tripping 15 times over the same stone. Another corner kick, another mistake clearing, another goal for Barcelona. Messi crossed a ball from the right-side corner to the far post, searching again for Gerard Pique. The ball bent naturally toward the small box, and Rulli failed to clear with one hand, dropping the ball to the very middle of the big box, where Dembele was waiting to kick it inside the goal.

Mistakes are very expensive in soccer, and strong teams don’t give freebies away.

Barcelona’s game didn’t improve much despite leading on the scoresheet. The team tried to balance it’s shape by playing a 4-1-4-1 and sending Arturo Vidal in, but its defense (as a team) continued to perform poorly as in fact Real Sociedad had two more chances of scoring by the 83rd and 85th minutes.

Time ran out and the Cules, leaving Sparta now with three points to ensure ranking first on the table no matter even before Real Madrid's 1-1 draw with Athletic Bilbao. Shedding light over the Anoeta experience, Valverde has a lot to think about, as Barcelona’s weaknesses from the previous season seem to remain: a vulnerable defense that’s frequently exposed by a slow retreating, unbalanced midfield that is frequently outrun, a brilliant but repetitive attack that sometimes seems to lack penetration alternatives and relies on Messi’s genius to appear, insisting permanently on finding gaps by associative play.

Real Sociedad lost three points Saturday to Barcelona, but the leader of LaLiga has a lot of work to do once back in Catalunya, as many teams will face the Cule with the same game plan, and they won’t be giving freebies away like Real Sociedad did.