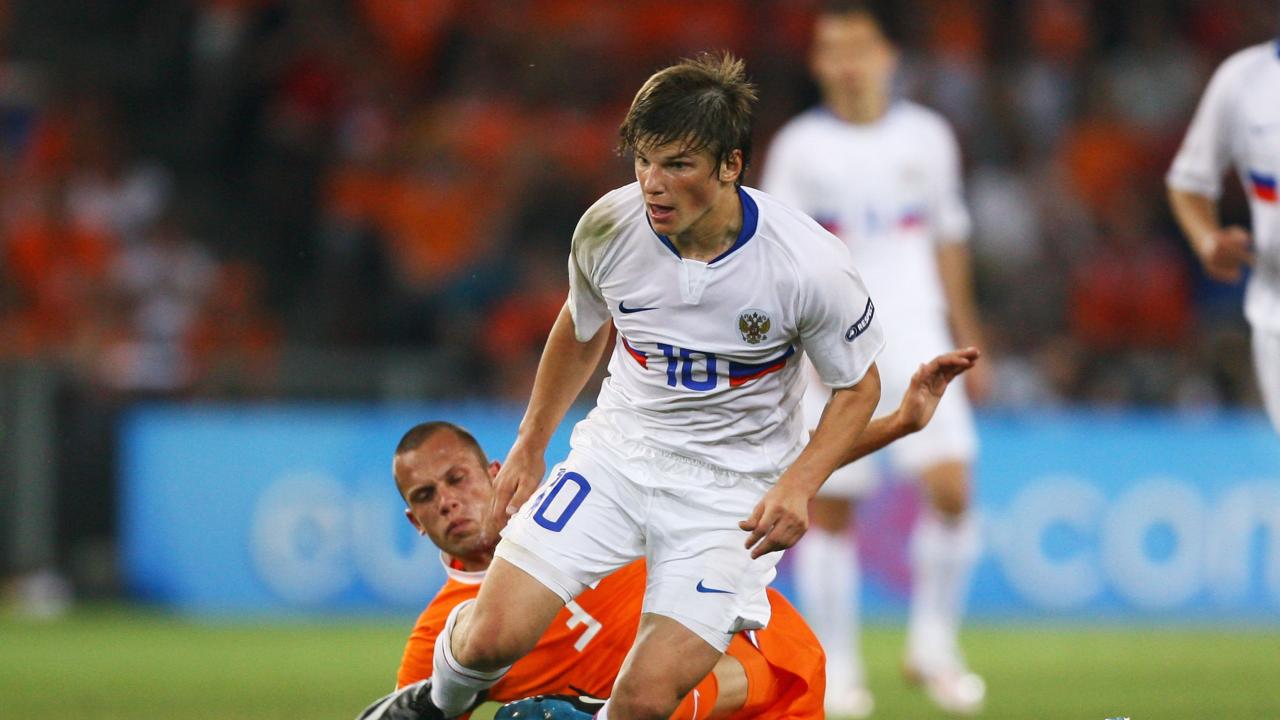 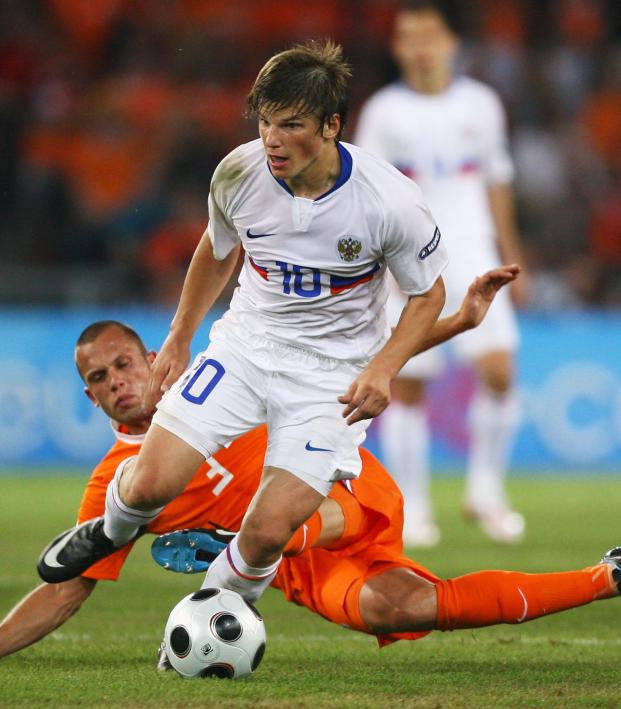 Pulling Back The Iron Curtain: The Legacy Of Russia's Euro 2008 Semifinal Success

For a memorable few months in 2008, Russia was the talk of the soccer world.

Zenit St. Petersburg captured the Europa League title, defeating Rangers in the final after dismantling Bayern Munich 5-1 on aggregate in the semis.

Just a month later, the national team also achieved unprecedented success, reaching the semifinals of Euro 2008 before bowing out to eventual champion Spain.

Manager Guus Hiddink had Russia playing its best soccer since it became a stand alone nation. Andrey Arshavin, the star for both Zenit and the national side, was the most dangerous attacking player in the world, terrorizing defenders with his mesmerizing feints and deft changes in direction.

Striker Roman Pavlyuchenko put himself on the international radar, finishing second in the Golden Boot running, joining left back Yuri Zhirkov, holding midfielder Konstantin Zyryanov, as well as Arshavin in the UEFA Team of the Tournament.

And one cannot forget center back Denis Kolodin, who spent the tournament hitting absolute rockets from a distance that he had no business shooting from (and nearly scoring them).

The pinnacle was a 3-1 extra-time victory over Hiddink's home nation of Netherlands in the quarterfinals. The Dutch came in as strong favorites, led by attacking talents Ruud van Nistelrooy, Wesley Sneijder, Dirk Kuyt and Rafael van der Vaart, plus Arjen Robben and Robin van Persie off the bench.

Marco van Basten's side had gone undefeated in a group that included Italy and France, defeating the Italians 3-0 and putting four goals past the French. The Netherlands was expected to control the match; instead, it was the dimunutive Arshavin who dominated the proceedings.

Hiddink put Arshavin as a second striker behind the physically formidable Pavlyuchenko, allowing his talismanic talent free roam of the pitch. Arshavin spent much of his time on the left flank, dismantling Dutch fullback Khalid Boulahrouz so thoroughly that van Basten subbed him off after 53 minutes.

But regardless of where Arshavin was on the pitch or who the Dutch threw at him, Shava, as he was affectionately known by Zenit fans, was unstoppable. In the end, his assist in the 112th minute and his goal four minutes later gave Russia a well-deserved victory.

A 3-0 defeat to Spain in the semifinals dampened the mood slightly, but it was against a Spain side that was in the midst of a 35-match unbeaten run.

Russia's core of Arshavin, Zhirkov and Payluchencko were all in their mid-20s, while talented keeper Igor Akinfeev was just 22. This team was overwhelmingly home grown, with Ivan Saenko, a winger for German club Nürnberg, the only man playing professionally outside of his home country.

It seemed that Russian soccer was poised to break through as an international powerhouse. But it never quite repeated the success it experienced in 2008.

Paired with powerhouse Germany in World Cup 2010 qualifying, Russia finished second in its group, good enough for second place, but it could not defeat tiny Slovenia in a playoff. Russia then easily qualified for Euro 2012 but could not advance from an easy group.

Two successive tournament qualifications in 2014 and 2016 provided more hope, but both led to group-stage exits.

The lone international achievement for Russian soccer in recent years was a trip to the World Cup quarterfinals in 2018, the year the country hosted the renowned international competition.

At the club level, Russian teams have also come across only intermittent success.

At the same time, talented Russian players began to seek opportunities abroad, with England being the top destination. Arshavin made a highly publicized move to Arsenal, Pavyluchenko joined its North London rival Tottenham, midfielder Diniyar Bilyaletdinov left for Everton, while left back Zhirkov became the most expensive player of the quartet, securing a $23 million transfer to Chelsea.

Yet the same narrative continued for these players while in England: glimpses of promise but no sustained success. Pavlyuchenko reached double digit goals just once in his Spurs career, Bilyaletdinov never really caught on in Merseyside while Zhirkov failed to ursurp Ashley Cole for the left back role at Chelsea.

Arshavin had the biggest impact of the group, posting six goals and eight assists in 12 matches for Arsenal in 2009 after joining in January, including his memorable four-goal output against Liverpool. He was a key attacking threat for the Gunners, recording 22 goals and 23 assists across his first three seasons in London before poor form and fan criticism forced him back to Russia.

Whether it be on an international or domestic level, Russian teams and players have yet to match the exploits of 2008. But then again, maybe they don't have to.

Those in Arshavin's generation of players, born in the early-to-mid 1980s, were the first to spend most of their lives without the looming presence of the Soviet Iron Curtain. The USSR dissolved in 1989, leaving Russia as a singular nation with an unsure future and no footballing identity.

"What separated this side from previous Russian outfits," John Torrie of These Football Times mused, "was that they were the first generation fully free of Soviet shadows and represented a wider revival of the nation’s confidence and pride. Their performances in 2008 were the perfect embodiment of this widespread sense of rejuvenation."

Guus Hiddink was the first manager to be able to tap into this generation's creativity, using it to guide the side all the way to a European Championship semifinal.

After the fall of the Berlin Wall, a few Russian players were able to take advantage of their new freedom and leave for the unventured waters of European football, thus paving the way for the future of Russian football.

Andrei Kanchelskis was the first to take this leap, joining Manchester United in 1991. The winger led the Red Devils in scoring in 94-95 before leaving to play a long career with a host of English and European clubs.

Goalkeeper Dmitri Kharine joined his fellow countryman in England in 1992 with a move to Chelsea, making 118 appearances for the Blues, while talented midfielder Valeri Karpin carved out a decade-long career in the Spanish top flight.

Now, dozens of Russian players play across Europe. Midfielder Aleksei Miranchuk relocated from Lokomotiv Moscow to Atalanta back in September 2020, Aleksandr Golovin toils in Ligue 1 for Monaco and World Cup 2018 hero Denis Cherychev, a winger for Valencia, has spent his entire career in Spain.

Russian domestic football has also steadily improved during this period. The country was ranked as low as 21st in the UEFA country coefficient in 2004, falling below countries such as Bulgaria and the former political union of Serbia and Montenegro. Russia has now risen all the way to sixth in the rankings, only trailing Europe's "Big 5" leagues.

Internationally, Russia has qualified for five of the last six major tournaments, with the playoff defeat to Slovenia coming as the only misstep, and has produced a steady flow of quality players.

Those few months in 2008 paved the way for the next decade of Russian soccer, re-establishing Russia as a contender on the international level and helping the country's football move forward and out of the shadow of the Iron Curtain. The peaks have not been as high, but the footballing standard for the world's largest country has also been raised.

Still, this progress is not perfect. The country's geography is a major factor, as the majority of Russian footballers choose to stay home to play their football.

Russia is a UEFA member but not a European Union nation, making moves abroad a difficult process. Plus, thanks to the influx of oil and gas money earned by the country's oligarchs, the Russian Premier League offers players higher wages than they would earn abroad, encouraging players to compete domestically.

Despite these challenges, it's clear that Russia is a better footballing nation than it was 15 or 20 years ago, and it has that fateful summer of 2008 to thank.