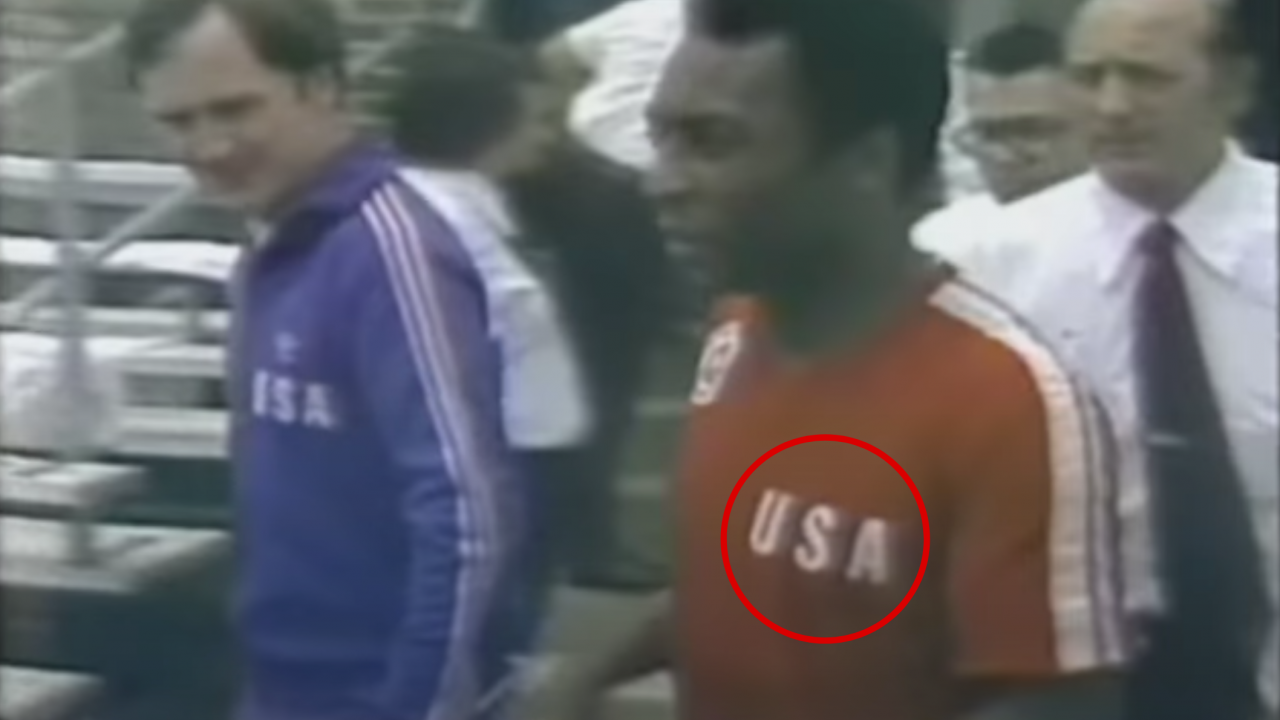 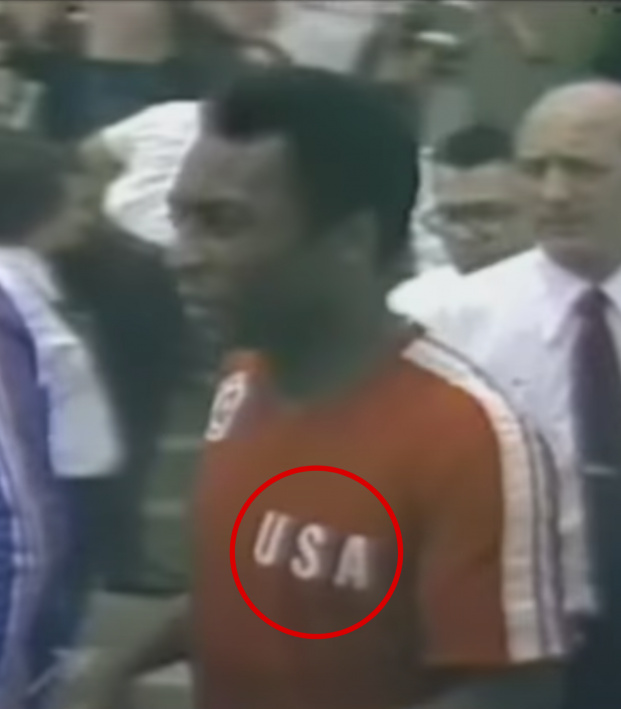 Remembering When Pelé Played For The USMNT And They Still Sucked

The U.S. will host the men’s World Cup for a second time in 2026, which will coincide with the nation’s 250th anniversary. It won’t be the first major birthday the U.S. has celebrated with a soccer tournament, though the USMNT won’t have had fond memories from the first. Not even Pelé was able to save the U.S. at the Bicentennial Cup.

In 1976, as the U.S. was commemorating its 200th anniversary, the U.S. Soccer Federation saw an opportunity: Celebrate the occasion with an international tournament aimed at raising soccer’s profile domestically to convince FIFA it could host the World Cup. England, Italy and Brazil — which had won six of the 10 World Cups to that point — would play a round-robin tournament with the U.S.

Because the USMNT hadn’t qualified for a World Cup in 26 years, the USSF came up with a plan to make the Americans competitive: allow anyone playing in the then-booming NASL to compete for Team USA. Some greatest players of all time donned “USA” jerseys in the spring of 1976, including Pelé, Bobby Moore and Giorgio Chinaglia.

It didn’t help — the U.S. was still a disaster on the pitch.

Team USA, with a handful of Americans and a smorgasbord of sterling international talent, went winless in three matches at the Bicentennial Cup, outscored 9-1 in the process. Brazil, led by the likes of Zico, Roberto Dinamite, Rivellino and Gil, won all three matches to claim the Cup, despite Pelé playing for the U.S.

You know you’re a garbage team when not even Pelé can make you competitive.

After it failed to qualify for the 2018 World Cup, it became vogue to shit on the USMNT. But it’s always good to remember just how god-awful U.S. soccer was between its 1950 and 1990 World Cup appearances. The nadir was, perhaps, the spring of 1976, when Americans missed what could have been an amazing opportunity to grow the sport with the Bicentennial Cup.

Bicentennial Cup Beginnings — The Sport Of The Future, For 50 Years

As bicentennial celebrations enthralled the nation in 1976, U.S. Soccer was just trying to maintain a foothold in a country that mostly ignored the beautiful game. The NASL was about to peak, with the late 70s bringing about an explosion of popularity with stars like Pelé, Chinaglia, Moore, George Best, Franz Beckenbauer, Carlos Alberto and more. It really felt for a time like a turning point for soccer in the U.S., with the USSF keen on hosting a World Cup on home soil to cement the momentum.

Thus, the Bicentennial Cup was born, announced in March of 1976, about six weeks prior to the tournament.

“The tournament will help focus world-wide attention on our observance,” said Carlos Campbell, sports director for the American Revolution Bicentennial Administration. “Soccer is the universal language and the teams playing are the best.”

The idea was great: three of the best national teams in the world coming to the U.S. for full international matches (well, England considered them training exhibitions, but they’ve always been a snooty sort). Today, matches like this, even in friendlies, would draw close to 100,000 fans. In 1976, the U.S. played in stadiums less than 20 percent full.

With a World Cup qualifier against each other on the horizon later that year, both Italy and England sent their A teams to the U.S. for the Bicentennial Cup for preparation. (Both Italy and England had failed to qualify for that summer’s European Championship.) Brazil too had a strong squad, with a few holdovers from the 1970 World Cup winners and some rising stars. Team USA was a mess.

The U.S. had failed to even win a game in 1974 World Cup qualifying and was an afterthought on the world stage, in the midst of a 40-year gap between World Cup appearances. Gone were the days of the 1950 upset over England at the World Cup in Brazil.

Because these weren’t official FIFA matches, the U.S. made a dream team of sorts. Team USA was made up of five players from the U.S., five from England, two from Scotland and Northern Ireland and one apiece from Brazil, Italy, Poland, Peru and Trinidad and Tobago.

“It was an all-star selection of the foreign players and they threw some American guys in so they could call it Team America, I guess,” American defender Bobby Smith said. “That’s kind of the way, it seems. Why not have Bobby Moore, George Best, Pelé and Chinaglia, those big-shot guys on Team America? They’re playing here now. So it was Team America. It didn’t necessarily have to be Team American-born.”

The result was a melting pot of cultures, languages and, most importantly, playing styles. With more British players than any other region — and Englishman Ken Furphy, then of the New York Cosmos, coaching — there was a penchant to play long balls in the air. Pelé and Chinaglia, who Cosmos had just signed for $500,000, were used to receiving the ball at their feet; at the Bicentennial Cup they found themselves starved for service.

George Best and Rodney Marsh were kicked off the team after they failed to show up for the first practice.

The rest of the countries had their A teams out in force.

The Azzurri squad featured many players who would go on to win the 1982 World Cup, including legendary keeper Dino Zoff. Brazil was captained by Rivellino and included Zico, Roberto Dinamite and Gil, who won the tournament’s Golden Boot. England was led by top Premier League talent, including Kevin Keegan, Ray Clemence and Trevor Booking.

These were squads who had played together for years and were gearing up for bigger and better competitions. It ended up being a mismatch.

The competition opened with Italy playing Team America at RFK Memorial Stadium in Washington, D.C. Before the match, Fabio Capello — yes, the man who would later become England manager after coaching AC Milan, Real Madrid, Roma and Juventus —criticized Chinaglia for turning his back on Italy, which only motivated the new Cosmos star.

“Jealousy is a bad thing,” said Chinaglia, who had four goals in 14 Italy caps. “Many of the Italian players resent that I came here for money. But that doesn’t bother me. I have no use for people like that.”

The Italians had the last laugh, as Capello scored 15 minutes in and the Azzurri cruised to a 4-0 victory in front of 33,455 fans.

Chinaglia complained he would’ve scored two or three had his teammates been able to get him the ball. A contemporary UPI report said Pelé played “several passes too slick for his teammates to handle.” Pelé himself lamented the lack of preparation.

“We only practiced together twice,” Pelé told the Washington Post. “There was a great deal of confusion because we weren’t used to each other, particularly on the defense. Most of our players come from England, where they play more high ball. I’m used to keeping the ball low.”

After the match, Pelé rushed from the pitch to a nearby studio to help provide TV coverage to Brazil for the Seleção’s showdown with England in Los Angeles. Roberto Dinamite scored the lone goal in the 89th minute, with Brazilians admitting they were a bit lucky to win 1-0.

England then flew across the country to play Italy at Yankee Stadium in the Bronx. In between, the Three Lions were supposed to catch Paul McCartney playing at Madison Square Garden, but the New York Times said they were unable due to “several reasons” upon which the report did not elaborate.

Italy raced to a 2-0 lead before England rallied with three second-half goals to take all two points 3-2 in front of 40,650, the largest turnout of the tournament despite being played in part on the dirt infield of the venerable baseball stadium. (Back then, wins were worth two points and draws one.)

Later that day, Brazil beat Team USA 2-0. Unlike Chinaglia, Pelé refused to play against his compatriots as 20,253 watched from the brand-new Kingdome in Seattle. The Brazilians dominated early in the match and often made Team USA look silly. At one point, Rivellino torched former Liverpool defender Tommy Smith with a nutmeg, sending the Brazilian players into raptures.

“The Brazilians were almost wetting themselves laughing,” U.S. goalkeeper Bob Rigby said of the nutmeg. “I was sitting next to Pelé on the bench. Pelé was always the diplomat, a gentleman. He almost had a hernia laughing.”

The final match day saw the U.S. take on England at JFK Stadium in Philadelphia while Brazil and Italy battled for first place at the historic Yale Bowl in New Haven, Connecticut.

In the first match, a mere 16,239 showed up at a stadium that at the time held 100,000. Keegan scored twice in the first half and Gerry Francis made it 3-0 in the 54th minute for England, but the U.S. was able to salvage some respect by finally getting on the score sheet through an 87th-minute strike from Scottish sub Stewart Scullion. The match ended 3-1 and England secured second place.

The de facto final later in the day was attended by 36,096, including sitting U.S. Secretary of State Henry Kissinger, a German-born soccer fan. (The alleged war criminal was influential in U.S. soccer and would later be named to the NASL board of directors.) The physical match saw three players sent off, but Brazil was by far the better side, winning 4-1 to finish the competition as unbeaten champion.

“We are ready to get to the top of the world again,” Brazil coach Brandão said. Brazil wouldn’t win another world title for another 18 years, five years after his death.

Bicentennial Cup Impact — Soccer’s Still The Sport Of The Future

The Bicentennial Cup wasn’t exactly a roaring success for the U.S. The pitiful attendance for the matchup against England on the 200-year anniversary of Americans kicking the British out of the country exemplified the fact soccer still had a long way to go to become mainstream.

The average attendance was decent — just under 30,000 — but nothing that lasted longer than the bicentennial celebrations. The USMNT went on to win just one game in World Cup 1978 qualifying and continued to be awful until the late 1980s. And the U.S. didn’t get a chance to host the World Cup until 1994.

There was a measurable knock-on effect in the NASL, which saw average attendance steadily increase in the years after, in part thanks to the draw of Pelé. But the league folded less than 10 years later.

“You’ve got a chance to see these guys,” Bobby Smith said. “If that doesn’t register with the soccer community, then just fold up the tent and go home. Did a hundred people go to every NASL game after that? I don’t know. It was a pretty cool thing for this country to see the Brazil, Italy, England national teams. Why wouldn’t that have a positive effect?”

Despite the tepid response to the tournament, U.S. Soccer didn’t fold up the tent and go home, eventually breaking through to return to the World Cup in 1990 (and let’s not forget the USWNT won the first Women’s World Cup a year later). The U.S. men reached every World Cup thereafter until the 2018 fiasco.

And as much as that 2018 squad was criticized for missing the World Cup, at least they didn’t get outscored 9-1 while fielding World Cup winners like Pelé and Bobby Moore.