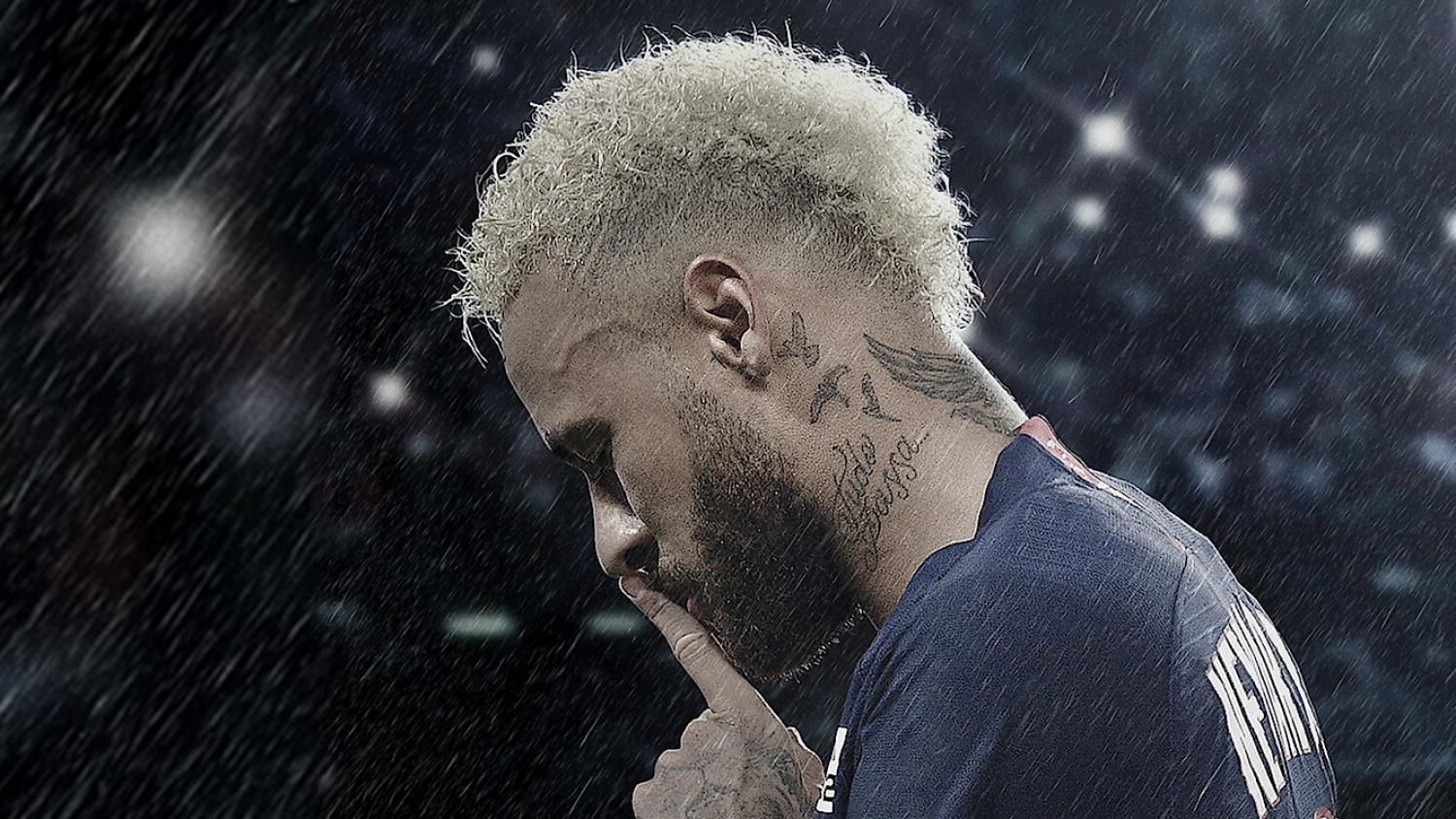 Neymar Jr.'s "three amigos" and Neymar Sr.'s entire business operation are things I'm going to be thinking about for a long time.
Netflix

"He's in constant chaos, you know? He often creates it," says Dani Alves with a laugh during the opening of Neymar's new Netflix documentary. "He seems to enjoy that perfect chaos."

And with that we not only have the basis of the title — Neymar: The Perfect Chaos — but a good synopsis of the polarizing footballer who delights in the roles of entertainer, savior, clown, antihero and villain without ever really knowing, or caring, which mask he's going to don on any given day.

It shouldn't really be possible to be both Batman and the Joker but that's how the enigmatic Brazilian views himself — and there's probably more to be said about how Neymar comes to understand most experiences in his life by putting them through the lens of the Christopher Nolan films, which is an odd character trait that affects a perplexing amount of professional footballers, but we'll save that for another time.

Anyway, the film does unearth some of the reasoning behind Neymar's most highly publicized moments. What lies beneath doesn't always necessarily make you more sympathetic to his actions, but that's also a testament to the filmmakers and Neymar for creating something that has enough authenticity to keep you engaged.

Despite a somewhat heavy-handed use of time jumps, the three-episode series delivers stunning on-field footage that's sure to appeal to all fans of the game. It's easy to forget that Neymar has already been playing professionally for almost 15 years. His story is the story of football over that period, and there's a lot of fun to be had in watching scenes from such iconic moments — the 2011 Copa Libertadores Final, 2014 World Cup, 2015 Champions League Final, 2016 Olympic gold medal match, 2020 Champions League Final — littered with beautiful shots of Neymar's mesmerizing tricks and flicks.

Maybe the best image is a tantalizing look at the post-2015 UCL final celebrations, when Neymar holds his phone to the camera to show us a small segment from a personal video that features a "plastered" Lionel Messi and Luis Suárez dancing around to a rhythm that now clearly only exists inside their own inebriated minds.

But the strength of documentary is in its probing of an often overlooked relationship that's defined Neymar's life — his career-long journey with father and manager Neymar Sr.

The elder Neymar says that football treated him unfairly during his own playing days, which amounted to nothing more than an early retirement and a construction job that he held in his son's youth. However, once it became clear that Neymar Jr. was destined for greatness on the pitch, he quickly shifted his entire focus to ensuring that his son avoid any and all of the potential pitfalls that he was now wisened to.

Neymar Sr. obviously puts his son first in everything, but that doesn't mean that he's destroyed his own ego in the service of someone else. Far from it.

One of the most fascinating elements of the whole series is this the convoluted, overly complex, strangely directionless company — NR Sports — that Neymar Sr. has clearly dumped a lot of that money into. Dad reveals that 215 employees are hard at work every day across his organization, doing god knows what inside branding, media and management offices. I'm pretty sure that a documentary examining the daily workings of NR Sports would be better than The Office.

We're given a few looks inside meetings, which typically consist of Neymar Sr. aggressively telling everyone in the room that every hour of every single day their job is to keep his son from "bad influences" and "corruption" because that boy is "very naive." When asked what's the one thing that could destroy the company, Neymar Sr. immediately answers Neymar — he could "flush all our hard work down the toilet."

During the series Neymar Sr. talks a couple times with his son about how his entire life's mission is to build this big conglomerate before handing it off to him (never mind that the whole enterprise will probably collapse in value once Neymar's retired). The look on Neymar Jr.'s face when he says this is beyond telling — a part of him clearly dies inside when he considers moving into his dad's office and preparing presentation slides covered in corporate jargon.

The relationship between father and son was obviously at its strongest during Neymar's time at Santos and Barcelona, but the filming here takes place in Paris and it's clear that the relationship has strained to the point where there's not much holding them together apart from business.

Neymar admits that there's distance between them. There's a shot of the two eating dinner in separate rooms, the space between them only an archway but it might as well be thousands of miles.

And then there's the scene that stirs the most sympathy for Neymar Jr. — a very real, very heated argument between the two that occurred after the attempted blackmailing of Neymar in a fraudulent rape case. His dad uses this moment to attempt to reinsert himself in Neymar's life, claiming that this is what happens when his son's left to his own devices, but Neymar isn't having it — he's tired of the way his dad treats everyone, and on the evidence of what we've seen in the documentary, he's justified in that view.

But other than that standout moment there's not a lot here to — as Neymar said he hoped it would — "change the minds of haters."

There's an obsession with a word that seems to be leveled at him a lot in Brazil: monster. Neymar is clearly not a monster. The worst that could be said of him is that he's a 30-year-old stuck in adolescence.

Off the pitch, there's a lot of video game playing and endless amounts of scrolling through Instagram. His interviews aren't very revealing, and part of that is because they're always dumbed down by the constant presence of the three amigos — Neymar's ever-present entourage that earns six figures a year to laugh really loudly at things that might not really be funny at all.

It doesn't seem like being Neymar's friend would be the worst thing in the world — a giant inflatable soap soccer field in the backyard today? sure — but it does look exactly like Billy Madison. I imagine the scene at home plays out exactly like this whenever Neymar goes to training or a game.

Then there's the relationship with his son Davi Lucca, who Neymar says he doesn't get to see often and who races into his father's arms whenever he sees him — Davi grappling on in a desperate attempt to keep Neymar in his life for as long as possible, even if it's just a few fleeting hours every couple months.

If you're looking for answers on some of the biggest questions that hound Neymar, they're not really here either.

Why did he really leave Barcelona for PSG? The best, most honest answer probably comes from Messi during his interview segment.

"I really don't know the reason for his move," Messi says with a genuine tone of sadness as he reflects on all the potential Champions League trophies lost. "I never found out."

Neymar Sr. says he never wanted his son to leave Barcelona but also that it was never about getting out of Messi's shadow. Maybe there isn't much of a reason behind it except for Neymar's capricious behavior. When explaining why he wanted to leave PSG so badly in 2019, Neymar says that it wasn't about the club or the fans, it's just that he knew he'd "feel better somewhere else."

Why does he exaggerate fouls? Because he gets fouled a lot. Because at the 2014 World Cup he suffered a hard foul that, if it "had been an inch to the side," would've cost him his ability to walk (theoretically), and in Neymar's head, it's as if that foul did truly land a debilitating blow and excuses any and all future theatrics.

With Neymar suffering from injuries in France and the strain of a failing paternal bond, you start to wonder what his hero's journey is going to be over the final half hour to give the documentary an uplifting closure. From the classical "abyss" of heroic storytelling, Neymar's moment of "transformation" is the death of Kobe Bryant on Jan. 26, 2020 — which makes it clearer why he's wearing a Bryant Lakers jersey in every interview, but doesn't at all fit the timeline of the events it's supposed to inspire.

Latching onto Michael Jordan's speech at Bryant's memorial — "Kobe gave every last ounce of himself to whatever he was doing" — Neymar enters the "atonement" phase as a fully focused athlete and delivers the performances that see PSG past Borussia Dortmund, Atalanta and RB Leipzig before falling to Bayern Munich in the 2021 UCL Final.

Does it feel all that genuine? Not really, it seems like a convenient plot device, but our hero marks his "return" with a newfound love for the game, his family and PSG.

That's the end, with his contract extension at the club and the arrival of Messi only receiving title cards, and there's a sense that the best part of the story remains untold as the credits roll.