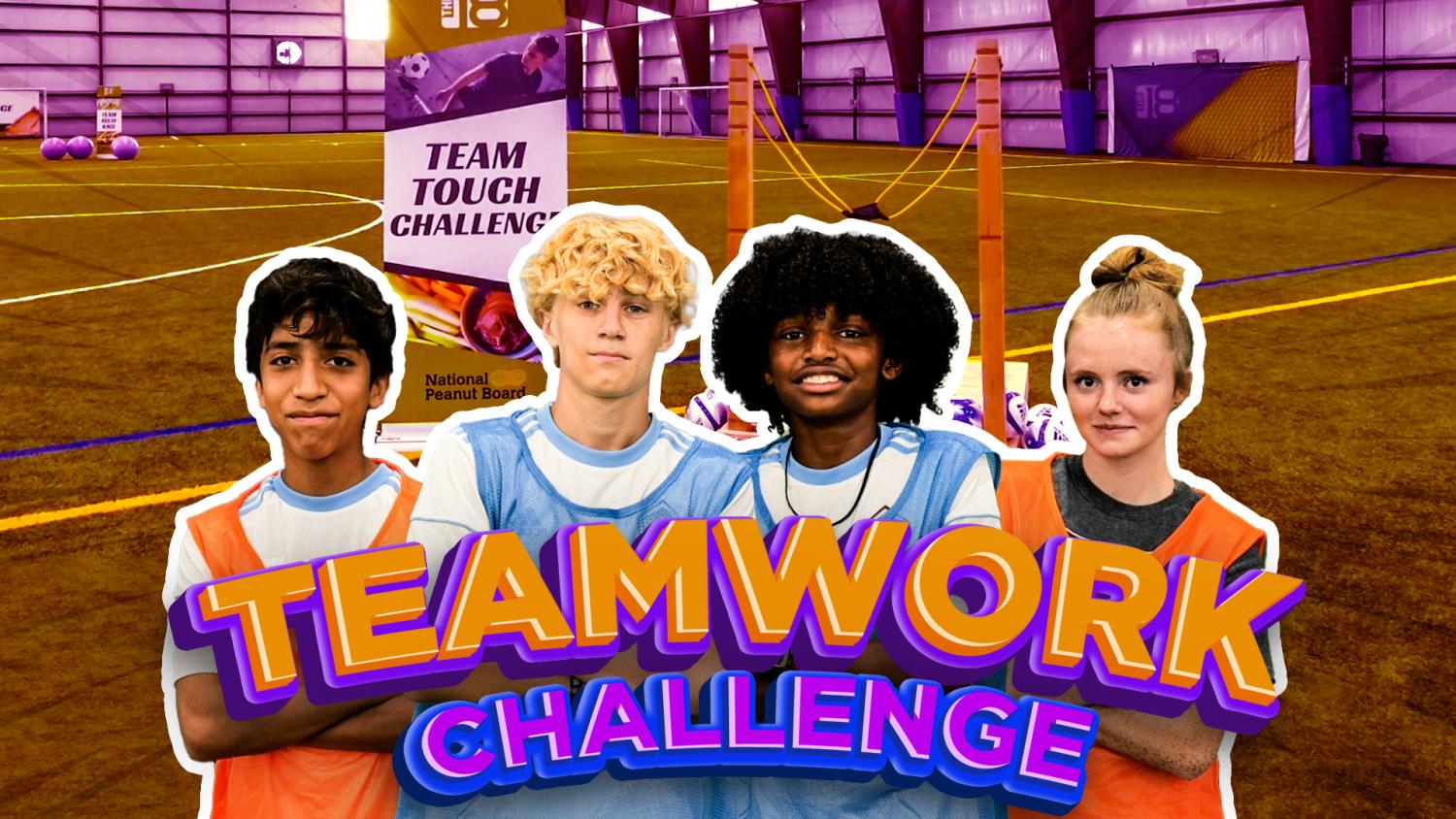 The18 and the National Peanut Board teamed up to host a youth soccer teamwork challenge.
The18

Imagine kicking soccer balls at an 18-foot-tall dart board, dodging giant exercise balls while dribbling through a maze of cones, a catapult launching soccer balls from 40 yards away and shooting through seemingly peanut-sized targets. Daunting, sure, but add in a teammate and it becomes an exhilarating afternoon of cooperation.

As the official sponsor of teamwork, the National Peanut Board hosted an event in which players from Colorado Rapids Youth Soccer Clubs competed in team-based soccer challenges. What ensued was a fun day of collaboration, cooperation, plenty of peanut butter and a surprise ending.

Teamwork is vital in soccer. No one knows this better than those who have played at the highest levels of the game, like Landon Donovan.

“In soccer, it’s so much more instinctive, so there’s a real human connection that happens that you can’t manufacture, you can’t fake,” Donovan told The18 earlier this year. “If you care about the guy genuinely, and you’re willing to help him when he makes mistakes and visa-versa, that’s when you get teams that win championships from my experience, and that’s why soccer’s so unique.”

With that in mind, the National Peanut Board and The18 hosted a teamwork challenge in which four teams of two competed in four events to determine who had the best teamwork. The National Peanut Board had already worked with American stars such as Donovan, Weston McKennie, Sydney Leroux and Jordan Morris, so now it was time to turn to future American stars, as players from the Colorado Rapids youth clubs were invited to take part at Foothills Sports Arena in Denver.

In between the events, players were treated to a smorgasbord of peanut foods. The reason was two-fold: First, peanut butter is delicious. Second, peanut butter provides many nutritional benefits for athletes (and those who want to be athletes). You probably can’t find a professional soccer team on the planet that doesn’t incorporate peanut butter into its food regimen, and Donovan said it’s only heightened at the highest levels.

“I have these vivid memories of the team admin walking in with just a massive thing of peanut butter and setting it on the table for the next two weeks that everyone was just going to dive into,” Donovan said. “The national team’s so much better and so much more talented and there's so much more professionalism,” Donovan said. “Everything gets amplified more and more, so how you treat yourself, how you treat other people, how you are as a teammate, how you treat your body. All those little things matter. How you show up every day in training. All those things matter a lot.”

For the National Peanut Board’s teamwork challenge, youth players ranged in age from 13 to 17. Most had already played together, but one underdog team met on the day of and had to develop an understanding quickly. 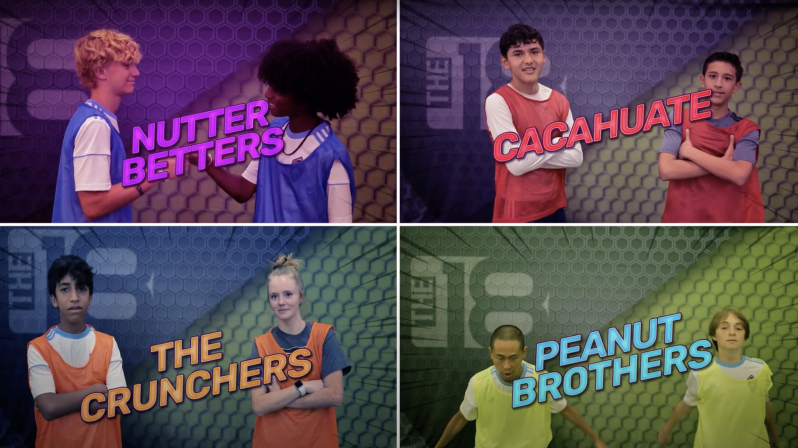 The challenge started with soccer darts, where the players lobbed Velcro soccer balls at an 18-foot-tall dart board. Points were given just like in traditional darts, with a bullseye worth 50 points. 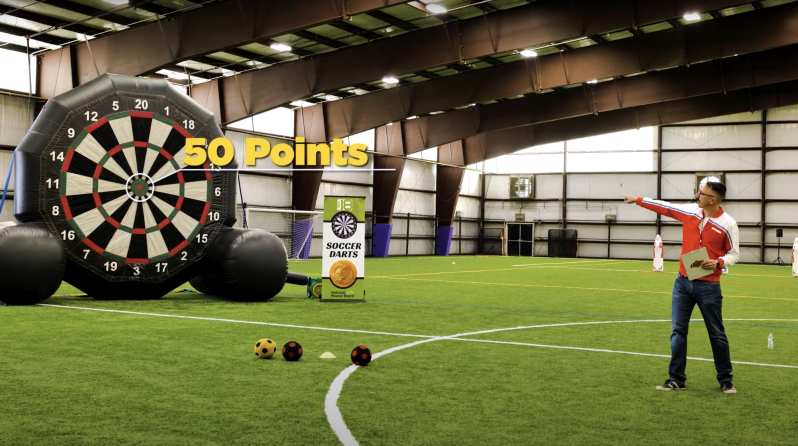 From there the duos moved on to the teamwork touch challenge. The18 built a catapult to launch balls toward the teams; each player could use one touch to place the ball as close as possible to the target. Control was important, but so too was working together like peanut butter and jelly to get the best score. 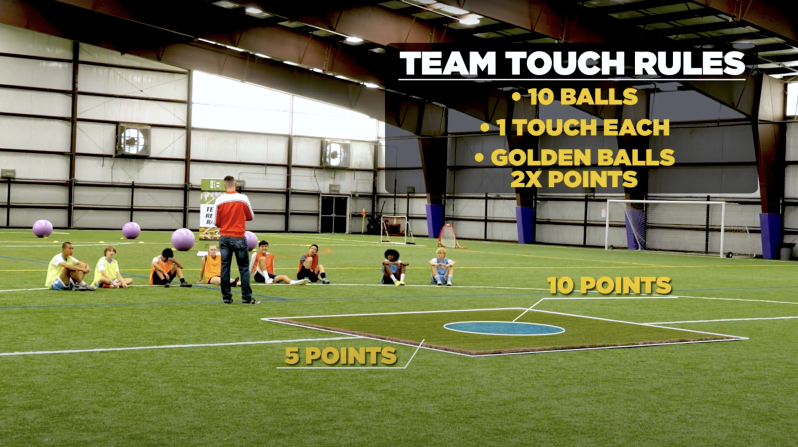 Third on the event list was the team relay race through an obstacle course. Each contestant dribbled around dummies, through little gates and dodged giant balls. At the end, players spun around with a little league bat and took a dizzy shot at goal. 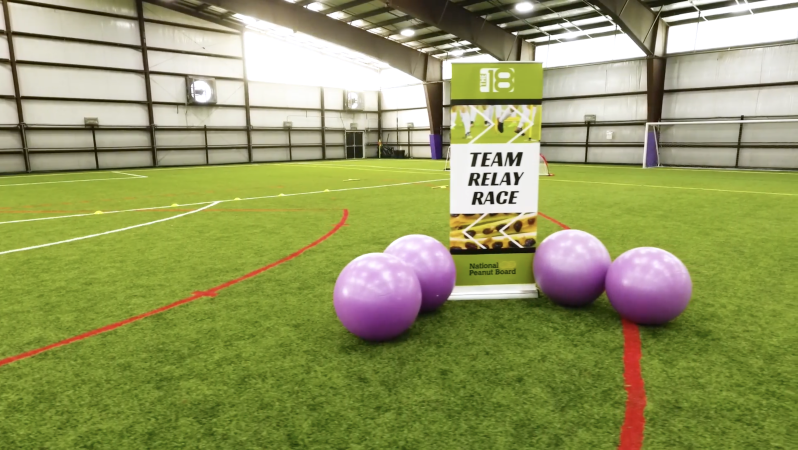 Finally, the teams put all their teamwork to use in the crossing challenge, where teammates took turns with one crossing and the other shooting 10 balls in two minutes. 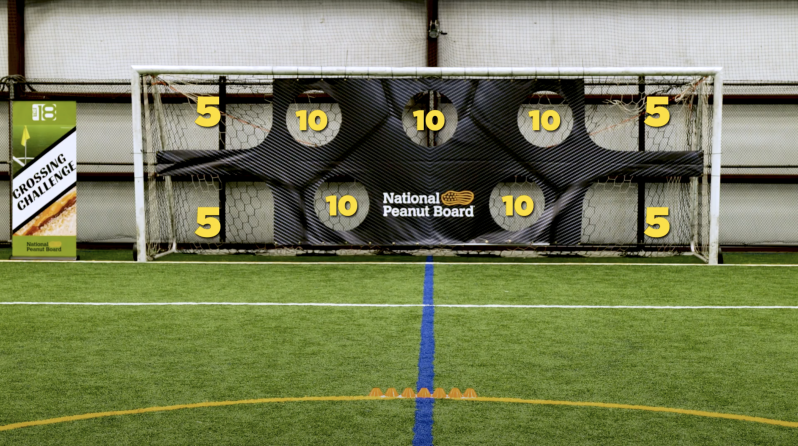 The Nutter Betters, represented by Kingston and Naveen, jumped out to an early lead and won the whole thing. The big surprise came from Kailey and Omar of The Crunchers, the lone contestants who didn’t know each other beforehand. The duo started slowly, losing the first two challenges, before winning the final two challenges to pull out second place in a huge underdog story. All contestants took home a Soccer.com gift card courtesy of the premier soccer gear website in the U.S., with the Nutter Betters securing $300 each. 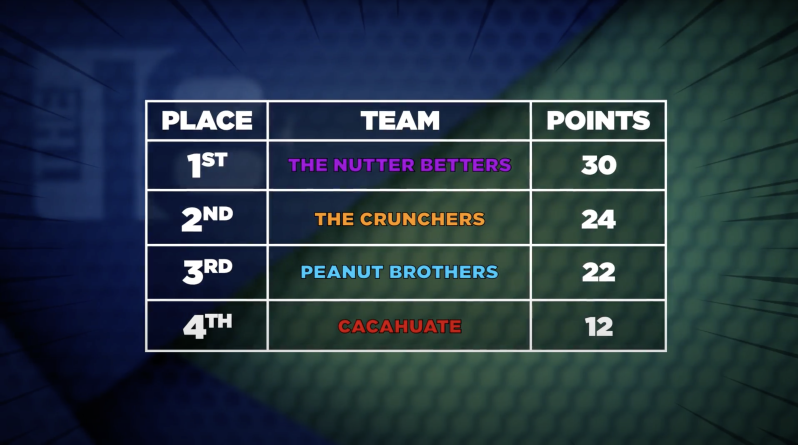 With bellies full of peanuts and a good time had by all, the contestants went home with a heightened appreciation for teamwork. Stay tuned for more fun, team-oriented content from the National Peanut Board and The18.com.