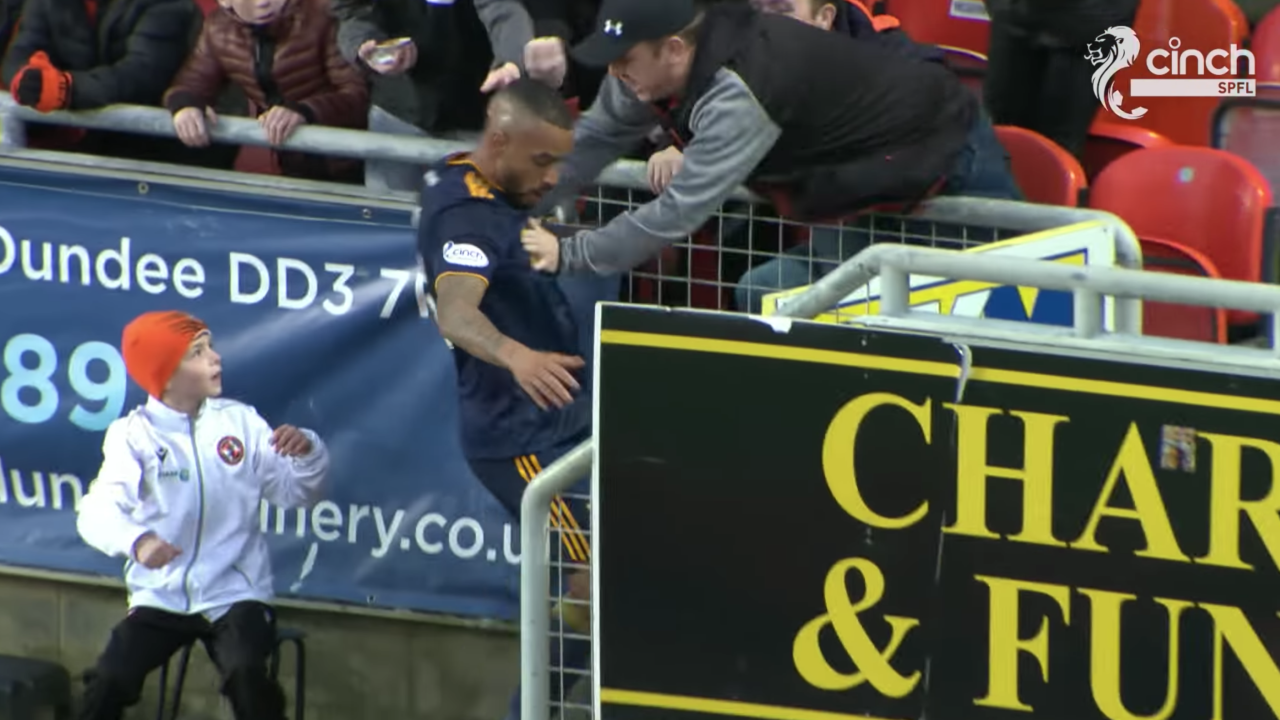 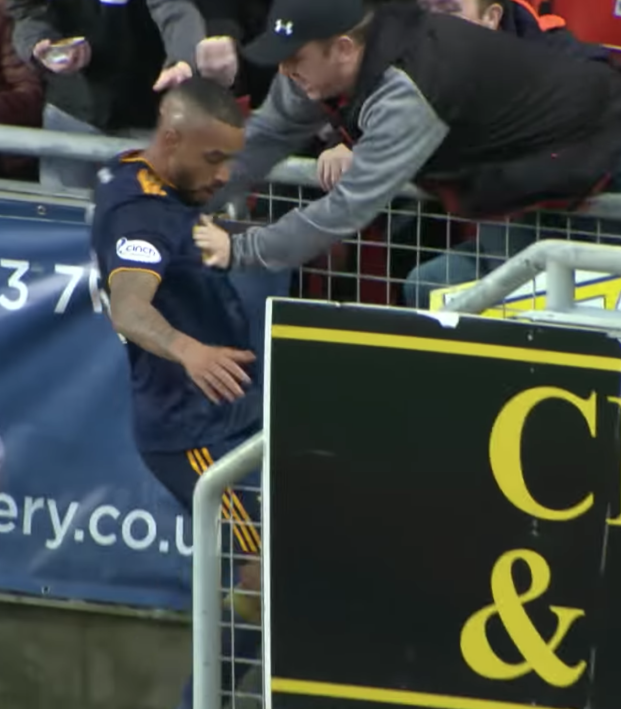 Disappointment followed the first Aberdeen corner of the match, as the low outswinger at the end of the first half failed to make it past the first line of Dundee United defenders. Aberdeen's Funso Ojo chased after the loose ball and attempted to play it back to the corner kick taker, but under pressure, his miscued pass went over the end line for a goal kick.

Ojo's momentum took him out of bounds and forced him to jump over the advertisement hoardings erected a few meters from the pitching. From there, the Belgian midfielder quickly decelerated to avoid crashing into the stands behind the goal, ending up face-to-face with a patch of Dundee supporters.

What came next can only be described as disgusting behavior.

Ojo is looking down, ignoring the crowd, when a pompous Dundee fan took it upon himself to shove the Aberdeen player while other supporters hurled objects toward the Belgian midfielder. Ojo took a step forward to have a word with the violent fan before making the wise decision to calmly walk away.

Yet to the surprise of everybody at Tannadice Park on Saturday, Ojo received his second yellow card and was sent off.

What else should he have done here? It's easy for people at home to say that he should have walked away immediately, but they are not the ones getting pushed by a complete stranger.

If this were stateside, few people would have scolded Ojo if he decided to go full Ron Artest at the Palace of Auburn Hill circa 2004 (the fans were at fault then, too).

Instead, he maintained composure and decided against rearranging the facial features of an immature man. This clip should be shown to players around the world as the model response for dealing with a fan who has just assaulted you.

According to the International Football Association Board (IFAB), Ojo's actions technically deserved a yellow, as a player must be cautioned for: "climbing onto a perimeter fence and/or approaching the spectators in a manner which causes safety/security issues."

Riposte: May I suggest common sense from the referee? It was unavoidable that Ojo ended up mere feet from the opposing fans, and given that he was outnumbered 500-1, Ojo's safety was clearly more at risk than that of a supporter who initiated physical contact by reaching over a railing.

Security offered a delayed and anemic response, and it's unclear whether the fan in question even had to leave the stadium. I guess sending Ojo off was the best way to ensure his safety though. 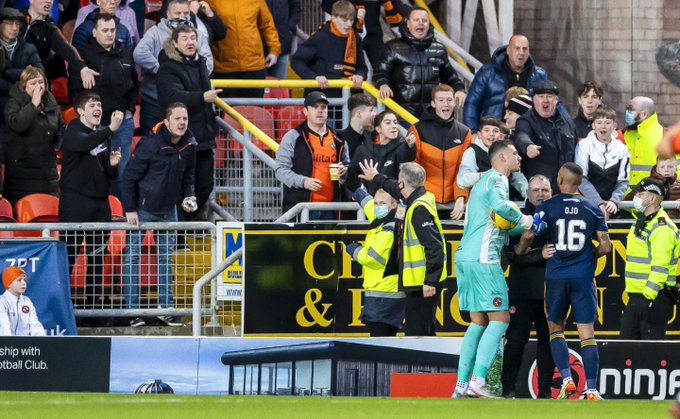 Funso Ojo walking away after being assaulted by a Dundee United "fan." Via the Evening Telegraph Sport on Twitter

“The club are appalled at the events that unfolded and are fully supporting Funso who remains shaken by the entire incident,” Aberdeen chairman Dave Cormack said. “Such conduct from any supporter is wholly unacceptable and should not be tolerated in what, for a football player, is their place of work.

“Given the circumstances around the incident, the club remains shocked at the decision to issue Funso with a second caution, which led to his dismissal from the field of play. As it was Funso who was assaulted, we sincerely hope that common sense will prevail and that the authorities will work with us to ensure that this injustice is addressed."

Cormack added that Ojo "remains shaken by the entire incident."

The fan in question — a 35-year-old man — has been arrested by Police Scotland and charged with assault, but police have not made progress in identifying the heathens who threw objects at Funso Ojo. Dundee went on to win the match 1-0 with a late winner from American Ian Harkes.